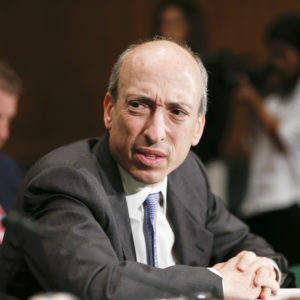 Cryptocurrencies were born from a philosophy of decentralization, individual liberty and American ingenuity. It should be no surprise that the crypto industry threatens the Democrats in charge at the Securities and Exchange Commission.

Without clear guidelines from Congress, under Chairman Gary Gensler, the SEC has been on the warpath to pull all cryptocurrencies under the securities umbrella. That could crush an innovative American industry trying to revolutionize how we use money.

Statists crushing ingenuity and liberty — what else is new?

Gensler’s weapon of choice is abusing a legal test established by the 1946 Supreme Court case SEC v. W. J. Howey Co., which involved the sale of orange groves in Florida. The case established the four-pronged Howey Test for identifying what constitutes a security that the SEC can regulate. Now, Gensler is stretching the bounds of that legal doctrine to argue that every digital asset, a line of computer code, is a security.

Worse, he has not issued clear rules for everyone to follow equally, nor has he telegraphed any intention to try. Instead, Gensler is taunting American companies to “come in and talk” about their projects in order to turn around and slap billion-dollar lawsuits on them in bad faith.

It is not fair governance; it is regulation by lawsuit.

I am not a cryptocurrency expert or investor. So, why am I concerned about the SEC suing cryptocurrency companies? Principle, economic growth and fairness.

It is simple and about the dangers of letting regulators in Washington exceed the authority that Congress gave them as they run wild, suing and destroying American companies. Gensler’s bait-and-switch brand of governance should strike fear in anyone doing business in this country. If left unchecked, it would only encourage a wider set of targets beyond crypto and more regulators getting into the act in other parts of the economy.

Gensler’s crusade could also have harsh consequences for Florida. Gov. Ron DeSantis is leading Florida into a new age of growth and innovation, and the crypto industry has a significant stake in our commerce boom. Earlier this year, Miami hosted Bitcoin 2022, hailed as “the biggest Bitcoin event in the world” — a feather in the cap for the city’s efforts to become the premier U.S. hub for the crypto industry. In the last three years, nearly a billion dollars of venture capital investment has gone into Florida’s crypto start-ups.

Jobs, capital and investment are key ingredients for economic prosperity in any state. But Gensler wants to sue his way into destroying it, and if Congress continues to drag its feet on setting clear guardrails for cryptocurrency, crypto start-ups will leave Florida and the U.S. altogether.

Some firms are moving operations to Singapore, where regulations are welcoming, and the government is not sabotaging progress. Cryptocurrency and blockchain technology are a product of American ingenuity. U.S. regulators should not be driving it abroad into the arms of our competitors.

Gensler’s crackdown has already hurt retail investors, the people the SEC is supposed to protect. For example, the SEC’s multi-billion dollar attack on cross-border payments company Ripple crashed the value of the XRP cryptocurrency, wiping out $15 billion in value for retail users of the decentralized token who had never heard of the company and were using the token to buy gas or groceries. Some had their savings wiped out. The SEC’s suit against Ripple did not mention fraud or a scam but a failure to retroactively register the token as a security.

Even though the SEC has no process for registering a digital token, it has been giving Ripple and the markets confusing signals for years about whether or not XRP was a security. How are market participants, investors, companies and consumers supposed to operate in good faith in such a confusing and frightening environment where a government lawsuit can come out of nowhere and wipe you out?

In truth, Gensler has betrayed the entire purpose of the SEC, which was put in place to protect the little guy, our entrepreneurial class and to ensure financial institutions aren’t taking advantage of retirees.

Instead of being a defender, Gensler has turned the SEC into a bully. If Congress doesn’t rein him in, voters need to send people to Washington who will, and Florida is a good place to start.

Kerri Toloczko is a resident of Naples and serves as a Senior Policy Fellow at the Institute for Liberty and Chair of the Southwest Florida Center-Right Coalition.