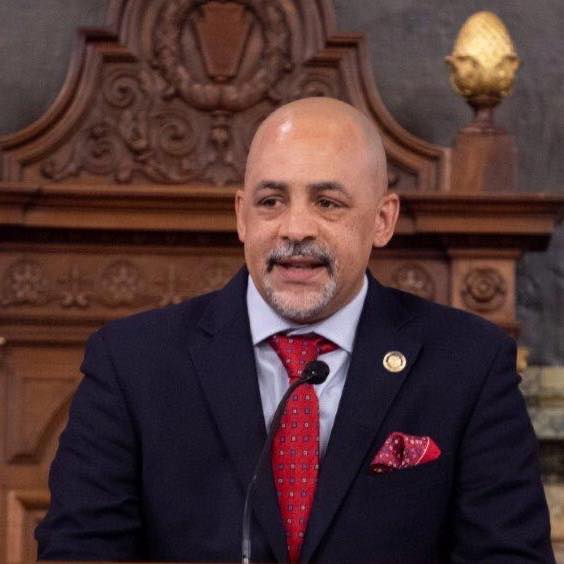 State Rep. Christopher Rabb plans to reintroduce a bill that would prevent what he calls “book banning” by school boards, arguing that only school employees — and not elected officials — should have that power.

Rabb, a Philadelphia Democrat, told Delaware Valley Journal that the bill is needed as districts are pulling books from shelves over parents’ concerns about sexually graphic or racially inflammatory content.

“It’s in response to rampant censorship efforts in school districts statewide,” said Rabb, when asked if he was targeting the Central Bucks School District in particular. That district has come under fire after the school board voted to institute a process where community members can ask that books be reviewed. A spokesperson for the district declined to comment on Thursday.

Image from “Gender Queer,” one of the books parents object to.

Rabb circulated a sponsoring memo about the bill in October and Reps. Nancy Guenst (D-Hatboro) and Ben Sanchez (D-Abington) signed on as co-sponsors.

Rabb’s bill died in the 2021-22 session without leaving the education committee.

That memo said, “These book bans are an attempt to censor educators and restrict the information and educational materials that students can have access to in school. In addition, these effectively unilateral decisions made by school boards are extremely harmful to LGBTQ+ youth and students of color given that the subjects discussed in these so-called ‘inappropriate’ and ‘explicit’ books often discuss many serious and real issues impacting these communities.”

Rabb argued elected school board members should not have the power to make decisions about educational materials. That power, he said, should be in the hands of school employees like principals and teachers.

“It’s not up to any elected school board member to ban it,” Rapp said. “That’s a pretty low bar. Where’s the due diligence?” People like superintendents, principals, teachers, and school librarians should be in charge of what books are available to students he said, not school board members.

“If school boards decide to ban a book, that’s the definition of censorship,” said Rabb.

Rabb said safeguards are in place for parents who disapprove of certain books. They can tell their district that their children “opt out” from reading those books, he said.

Malvern mom Fenicia Redman is suing the Great Valley School District and state officials in federal court to keep obscene and pornographic books out of her son’s high school.

Parent Jamie Walker of Chalfont said, “Parents vote in school board members they feel best represent them and want the best for their children. I believe this bill is an attempt by Democrats to push their agenda of getting inappropriate books into schools because they are failing to do so at the local level. This is exactly what the Democratic Party did with COVID mitigation. History repeats itself and parents should be upset.”