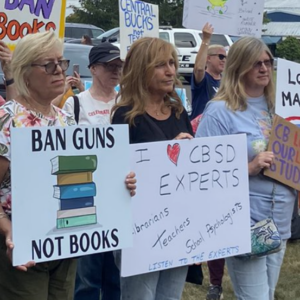 The Central Bucks School Board voted 6-3 Tuesday night to enact a new policy of reviewing school books for inappropriate sexual content. The policy was widely debated for weeks.

Superintendent Abram Lucabaugh, an advocate of the policy, explained guidelines will now be developed to implement the policy and that the district previously had no policy for reviewing library materials.

In a letter to parents from Lucabaugh and Board President Dana Hunter last week, they said the policy has been “mischaracterized.”

“A major mischaracterization of the proposed library policy is that it’s a book ban. That is unequivocally untrue. The policy is intended to prioritize materials that support and enrich the curriculum and/or student’s personal interests and learning.”

“The administration, not the school board, came to us and said, ‘We need a process,” said Hunter. “And so we are giving them a policy to create a process that we will all be made aware of.”

Opponents dismissed the explanation, arguing that any restriction on children’s access to books is problematic.

“As PFLAGers,  we support policies that lead to honest, accurate, and inclusive education to help every child learn and thrive,” said Rachel Fitzpatrick, co-leader of PFLAG Bucks County. “Removing the resources that empower our children to learn and ask questions removes a critical function of education. Let’s give schools and libraries more books, about more topics and people. Let’s empower kids to learn and ask questions.” She urged people to vote, educate, and “lead with love.”

“It’s disturbing to me that some of you are fighting so hard for their children to be exposed to some of this material. An earlier speaker said our library coordinator, Melissa Burger, chose books without political or personal bias. That’s not true. She has previously denied books written by Candace Owens, Justice Antonin Scalia, Ben Shapiro, Ted Cruz, Mike Huckabee, the list goes on. Are we seeing a pattern here? Yes. They’re all conservative authors… And speaking of majorities, despite the turnout of people opposing the library policy, please know most CBSD parents are appreciative of you all looking out for their children and protecting them.”

She also decried board members and opponents of the policy who had said derogatory things about the district on social media. “For people who preach ‘hate has no home here,’ it sure does get nasty online,” she said.

Her comments drew angry remarks and boos from some other audience members.

Another Warrington mother who noted that one of her children is LGBT, said “sexually explicit material has no place in schools. It happens that some books in question are about LGBT kids. That fact does not make the books unacceptable for school libraries.” Instead, it is ‘graphic’ pictures and explicit descriptions,” she said. She said it was the graphic content of the book “Gender Queer,” and not the transgender character — that make it “inappropriate to have in a school library. If it were art depicting a heterosexual couple engaging in oral sex it should also be excluded,” she said.

“This is not a ban, this is not censorship. It’s common sense.”

According to the new policy passed Tuesday night, “The District recognizes there exists a vast array of materials with rich educational content. It is the District’s objective to choose material that provides such rich educational content appropriate to students in the District over material that may provide similar content but with elements that are inappropriate or unnecessary for minors in a school setting.”

The policy also notes parents are free outside the school setting to choose whatever materials they want for their children, no matter how graphic.

Parent Paul Martino blamed the media for the brouhaha that swept through the district over the library book policy.

“The way that the press has completely obfuscated the real issue here is a disgrace. How many parents actually want pornographic — yes, pornographic — materials in their elementary school libraries?”

Elana Fishbein of Lower Merion, founder of the national parents-rights group No Left Turn in Education, issued a statement “applaud[ing] the Central Bucks School District for a good faith effort to create a healthy, common sense policy for selecting books for their libraries. They include parents on the committee that makes the recommendations.

“The district recognizes that there are boundaries regarding sexualized content that is ‘inappropriate and unnecessary for minors in school.’ Unfortunately, the ACLU, the Library Association, and the LGBTQ community know no such boundaries. They apparently feel that a good education includes a healthy dose of pornography,” she said.