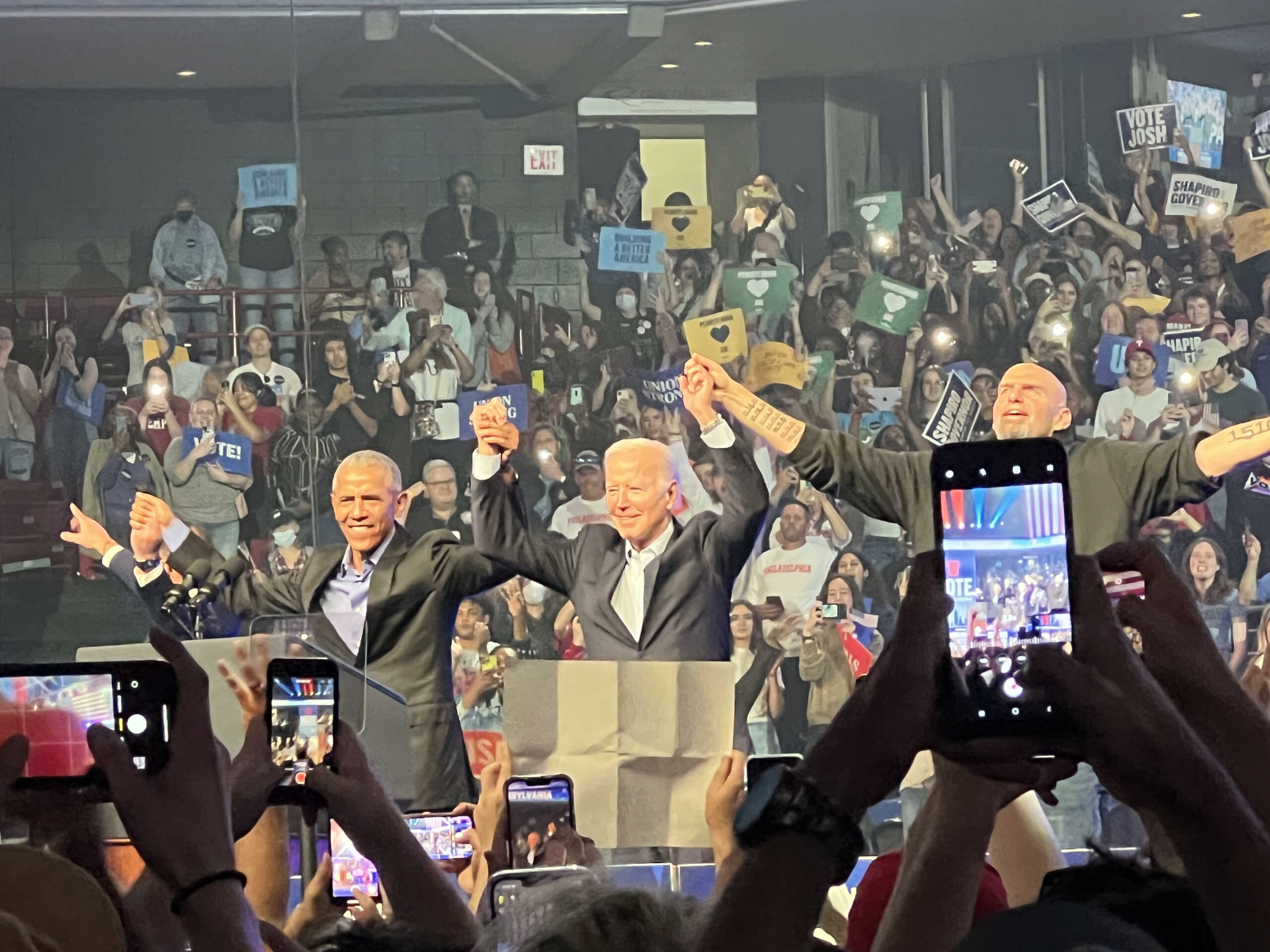 If anyone doubted Pennsylvania is Ground Zero for the 2022 election, the events on the final Saturday before the midterm elections left no doubt. The current resident of 1600 Pennsylvania Avenue and two previous tenants came to the state to campaign for their favored candidates for governor and senator. 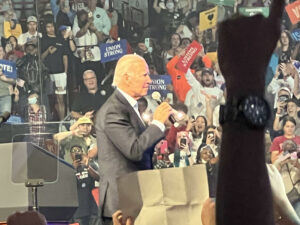 He urged the crowd to vote, lashed out at the Republicans, and bemoaned the 2014 midterms when Democrats lost the Senate.

“Midterms are always hard for which every party is in the White House, and typically midterms are tougher on Democrats. A lot of folks don’t pay attention to politics the way they do in a presidential year. In fact, maybe they don’t know Congress matters…Young people, especially, are less likely to vote in midterms, and that hurts Democrats. Young people tend to be more progressive. I can tell you from experience that midterms matter a lot. Some of you are too young (to know).

“When I was president, I was elected in the midst of a financial crisis. We did the right thing to get the economy back on track, but it was hard, and people were frustrated just like they are now. Sometimes it takes a while for things to settle down, so in 2010 we lost the House. And then, in 2014, even though now the economy was improving, we saw the lowest voting rate in modern history, and because of it, we lost the Senate.”

So, his agenda on guns, climate change, and immigration reform stalled, he said. 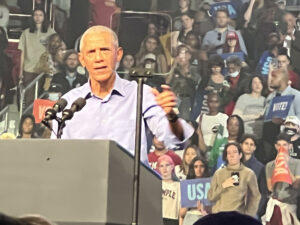 It was clear from the loud and sustained applause he garnered Obama is still a Democratic Party rock star.

Biden mentioned his childhood in Scranton and that First Lady Jill Biden is from Philadelphia.

He told the audience of several thousand they have the power to make “John Fetterman your next United States Senator and Josh Shapiro your next governor in three days.” 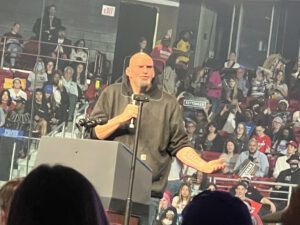 “Courage is also on the ballot,” he said. “When I think of courage, I think of Josh Shapiro…He stood up for the people of this state, and he’s going to be a fantastic governor.”

Fetterman mentioned that he is recovering from a stroke and gave his standard stump speech, taking shots at Oz, eliciting boos from the crowd.

Oz “likes to pander,” said Fetterman.  “I want to get this off my chest. Wawa is so much better than Sheetz.”

He said Oz would be on a stage with Trump and Mastriano, but “we are 100 percent sedition free,” an allusion to the Jan. 6 riots. Earlier in the day, when Fetterman made that same statement in Pittsburgh, the wind blew down the American flags behind him.

Fetterman said that he would vote to “codify Roe v. Wade” and to be the 51st vote to end the filibuster and “fundamentally change America.”

Shapiro said if elected, he would increase spending on public school education and teachers’ pay, start an apprentice program for high school students and remove the requirement of a college degree for thousands of state government jobs.

He said he “dedicated himself to public service” for his four children. He worries about their climate, their safety, and that they have “fewer opportunities than the world I was blessed to be born into.”

He also cited his Jewish faith where no one is required to complete the task of improving the world but “neither are we free to refrain from it.”

Shapiro promised to make sure that every child “has a safe community to live in.” 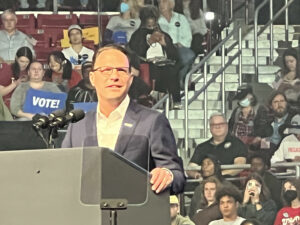 Shapiro also spoke about abortion, saying Mastriano would take that freedom from women, while he promised to veto any bill that would restrict it. Mastriano has said that while he opposes abortion, as governor he does not have the power to ban it. That would be up to the legislature.

Shapiro called his opponent extreme. However, during the primary Shapiro funded commercials that boosted Mastriano’s primary campaign, a move made by Democratic candidates across the country to pick the opponents they believed were easiest to beat.

Shapiro also mentioned Mastriano went to Washington D.C. on Jan. 6 and “he plans to decertify voting machines…Probably the ones here in Philadelphia. Are we going to let him get away with that? That is not how our democracy works.”

Delaware Valley parents have been objecting to obscene books in public school libraries, such as “Gender Queer.” Mastriano has sided with those parents.

Earlier in the rally, lieutenant governor candidate state Rep. Austin Davis (D-McKeesport) spoke about being the son of a bus driver and hairdresser, the first in his family to go to college.

Gov. Tom Wolf also spoke about abortion and touted the state surplus that he will leave the next governor.

And Sen. Bob Casey (D-Pa.) accused Republicans of being about “fear, smear, and divide.”  He urged the crowd to vote for Democrats.