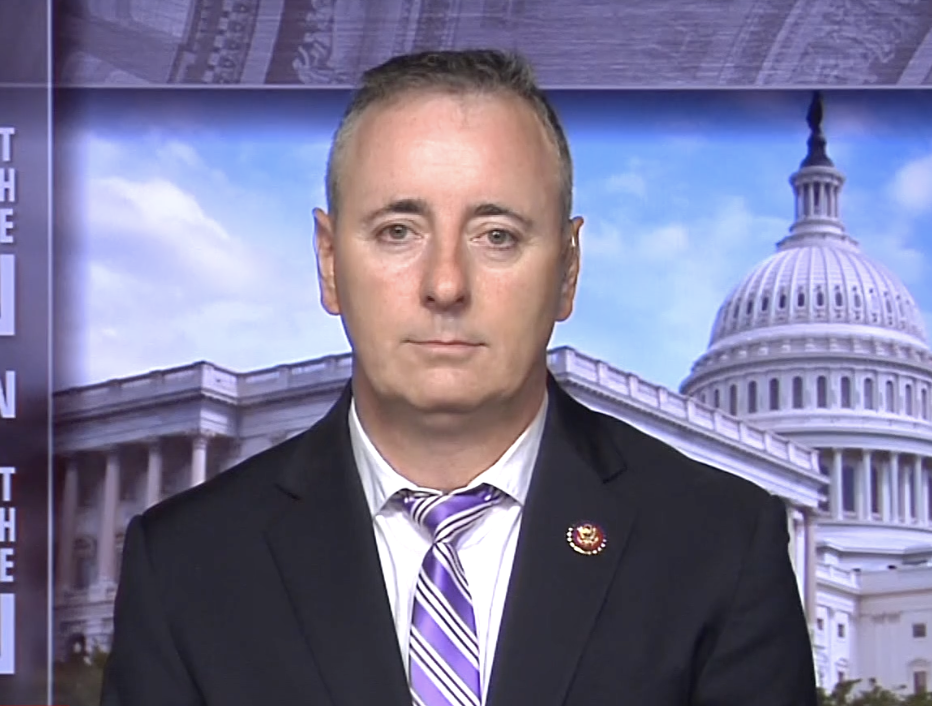 The House voted 290-137 on Wednesday to stop railroad workers from striking. The unions had set a Dec. 9 strike deadline. On Monday, President Joe Biden urged Congress to act to prevent a strike that could cripple the U.S. economy just before Christmas.

Fitzpatrick told “Fox News Sunday” congressional intervention was the last resort. But, he said, Congress “will not let this strike happen…It would be devastating to our economy. So, we’ll get to a resolution one way or another.”

Dean said on Twitter: “Rail workers deserve more paid sick leave. And the pandemic made clear that we cannot risk the health & safety of others by coming into work sick. All workers need the ability to protect their families and coworkers—and the time to care for their own health.”

The Biden administration had previously brought together negotiators from the railroads and the unions and announced a deal. However, members of some unions rejected that deal, which includes a 24 percent way increase over the term of the contract and a 14.1 percent payout immediately that amounts to $16,000 to employees whose contracts are ratified.

The bill now goes to the Senate. It was unclear when that body will vote on it.  Sen. Pat Toomey (R-Pa.) declined to comment. Sen. Bob Casey (D-Pa.) did not respond to a request for comment on Wednesday.

However, the railroads and industries that rely on them to transport products urged the Senate to act.

“Today’s strong House vote to follow the clear majority pattern and implement remaining tentative agreements clearly underscores the overwhelming bipartisan support for Congress to heed President Biden’s call and quickly avert an economically destructive national rail shutdown without modification or delay,” said AAR CEO Ian Jefferies. “The Senate must now act quickly to implement the historic deals reached at the bargaining table and already ratified by eight of twelve unions. Unless Congress wants to become the de facto endgame for future negotiations, any effort to put its thumb on the bargaining scale to artificially advantage either party or otherwise obstruct a swift resolution would be wholly irresponsible and risk a timely outcome to avoid significant economic harm.”

Mike Sommers, CEO and president of the American Petroleum Institute said, “Rail transportation is a critical part of the U.S. supply chain and is essential to the continued production and delivery of affordable, reliable energy. A disruption has the potential to reach every aspect of the U.S. economy and could hamper the U.S. gasoline supply, leading to upward pressure on prices for American consumers and businesses. We are pleased the House has taken action on this issue and urge the Senate to do the same.” 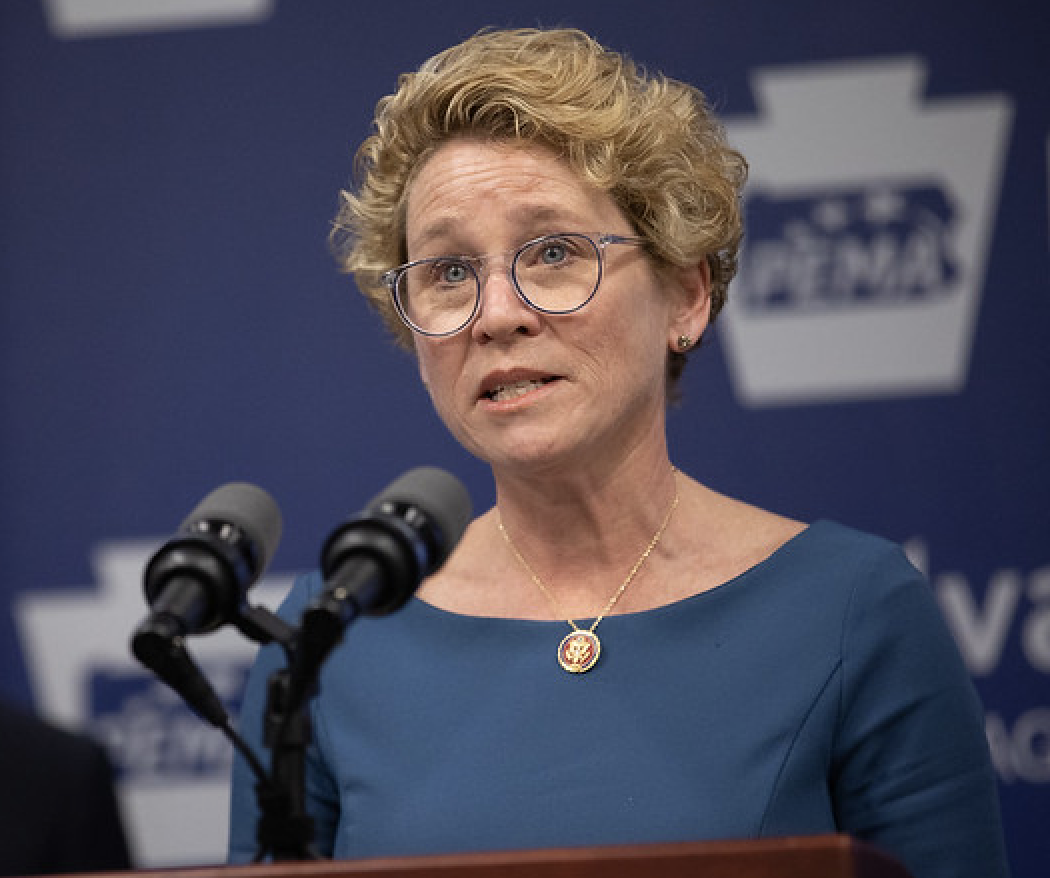 In the wake of a leaked U.S. Supreme Court opinion that would overturn Roe v. Wade, Senate Majority Leader Chuck Schumer is expected to bring the Women’s Health Protection Act (WHPA) back to the Senate floor. However, he is almost certain to lack the 60 votes needed for cloture — allowing the bill to come to the Senate floor for a vote — or even 50 votes to pass it. On Feb. 28,  Sen. Manchin (D-W. Va.) voted with the Republicans to block it.

In February, Sen. Bob Casey (D-Pa.), who is sometimes described as prof-life, voted to advance the bill with the rest of his Democratic colleagues. His office did not respond to a request to comment on whether he will vote that way again next week.

Casey’s stance on abortion issues has been fluid. Until recently, he said he supported a ban on abortions after 20 weeks — a position in line with a majority of Americans according to Gallup polling. However, he also refused to block changes to Obamacare in 2010 to provide taxpayer-funded elective abortions.

Supporting the WHPA, however, is a new level of pro-abortion politics.

According to an analysis by John McCormack who covers abortion legislation for the conservative National Review magazine, the WHPA creates a federal right to abortion through nine months of pregnancy in all 50 states; overrides nearly all state abortion laws, including parental-consent laws like Pennsylvania’s; weakens “conscience exemptions” to keep healthcare workers from being forced to participate in abortion procedures that violate their religious beliefs; and creates a right for non-doctors to perform abortions.

“WHPA will essentially legalize abortion throughout all nine months of pregnancy and undo every state law that has protected children in the womb,” according to the group Democrats for Life America.

While most Americans say they oppose overturning Roe v. Wade, polls consistently show fewer than 20 percent of Americans support unlimited abortion up to the day of birth. However, that is exactly the position every Democrat in the Delaware Valley’s congressional delegation took when they voted to pass the WHPA last fall.

Congresswoman Madeleine Dean (D-Montgomery) tweeted after voting for the bill, “The Women’s Health Protection Act will: Codify Roe v. Wade. Create federal protection against state laws that restrict women’s health. Prohibit unwarranted restrictions that single out abortion services or providers. Beyond proud to serve in this House that passed #WHPA.”

“Like many of you, I was outraged by the leaked draft opinion of the Supreme Court regarding Roe v. Wade – and what this extreme Supreme Court may do to our country,” Dean said in an email.  “Predicting this, in September, the House passed the Women’s Health Protection Act to codify Roe v. Wade. Since then, it’s been stalled in the Senate because of the filibuster. 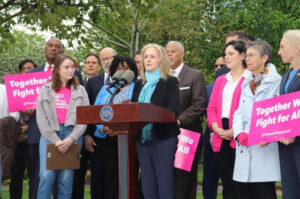 “It’s time the Senate carve out a filibuster exception to pass WHPA, as they’ve recently done with our debt ceiling,” she said. “Women must remain free to fulfill their right to privacy, legal and safe abortion, contraceptives, and full healthcare treatment.”

Congresswoman Mary Gay Scanlon (D-Delaware County/Philadelphia) tweeted after the SCOTUS  leak earlier this week, “Women were called hysterical for sounding the alarm about abortion rights. We were told Roe and Casey were settled law. This leaked opinion shows we were right to be terrified. The Senate must move NOW to pass the Women’s Health Protection Act.”

And Rep. Chrissy Houlahan (D-Berks/Chester) said this on her campaign website, “A woman’s health care decisions should be made between her, her doctor, and her faith – not politicians. I am very concerned by state-level laws that inject politics into that decision, as well as the dangerous Supreme Court challenges to Roe v. Wade. That’s why I am taking action by supporting the Women’s Health Protection Act, standing against efforts to defund Planned Parenthood, and working to improve maternal health care access through the Maternal Health Quality Improvement Act.”

Abortion is also on the table in the state legislature. State Senate Republicans are putting forward a bill that would add a constitutional amendment to maintain the status quo of no right to or funding for an abortion.

“If approved, Senate Bill  956 will prevent taxpayer dollars from funding elective terminations and will preserve the authority of elected officials – not the judicial branch – to enact future abortion laws.

“To no one’s surprise, this issue has elicited consternation from abortion rights activists who wield passionate and misleading rhetoric to convince the masses that my bill will lead to widespread bans. Nothing could be further from the truth,” Ward said.

“Currently, Medicaid covers both non-elective abortions and voluntary abortions involving cases of rape or incest but still withholds funding for elective abortions,” Ward added.  “If the state constitutional amendment is approved by the voters, this won’t change. The Abortion Control Act will remain the law, as well. The language does not ban abortions, but rather ensures that abortion policy in Pennsylvania comes from the people’s elected representatives.”