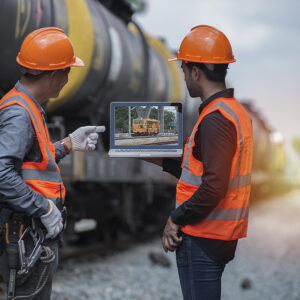 Leaders of American industry support President Joe Biden’s call for Congress to intercede and stop a national rail strike, and Democrats on Capitol Hill appear to be on board, too.

“What’s on the table is an agreement that has historic wage increases, the highest wage increases in over five decades,” said Ian Jefferies, president and CEO of the Association of American Railroads (AAR) during a press call on Tuesday. “They’ll receive a 24 percent increase over the term of the contract, and 14.1 percent effective immediately with an average payout of approximately $16,000 immediately to employees whose contracts are ratified.

“Equally importantly, (the tentative agreement) will maintain first-in-class healthcare at an employee cost-share that is dramatically lower than that compared to other industries,” Jefferies added.

If the holdout unions refuse to sign on in the coming days all rail unions will strike, bringing much of American commerce to a halt. Rail is vital to the transportation of food, energy products, chemicals, and agricultural supplies.

“At this time of high inflation and global security, we cannot have our exports stopping due to a rail strike,” said Mike Seyfert, president and CEO of the National Grain and Feed Association.

Rail is responsible for transporting 95 percent of ethanol, which is a vital component for making gasoline ready for final consumption, not to mention coal and liquified natural gas used to generate electricity across the U.S.

“API is joining the AAR and other industry groups to urge Congress to pass legislation to implement the agreement reached by the railroad unions and the railroads,” said Sommers. “Shutting down our rail system even for one day would have significant impact on U.S. gasoline supply and could lead to higher prices for American consumers and businesses ahead of the holiday season.”

On Monday, Biden warned of the impact of a national rail strike.

“My economic advisors report that as many as 765,000 Americans–many union workers themselves–could be put out of work in the first two weeks [of a strike] alone,” Biden said. “Communities could lose access to chemicals necessary to ensure clean drinking water, and farms and ranches across the country could be unable to feed their livestock.”

Progressives like socialist Sen. Bernie Sanders (I-Vt.) and Rep. Alexandria Ocasio-Cortez (D-N.Y.) are demanding Congress add the paid leave benefit. However, Biden said the tentative agreement was reached in good faith by both sides, and Congress should use its power “to adopt the agreement and prevent a shutdown.” It just needs to set aside politics and partisan divisions and deliver for the American people, said Biden, a self-described pro-labor president.

“This is a very, very strong contract and should be ratified by the unions that are still holding out,” LaHood said during an Inside Sources webinar. “You’re not going to find a more pro-labor president than President Joe Biden or a more pro-labor secretary of Labor than Marty Walsh, and to me—it just doesn’t get any better.”

Americans appear to agree. Recent polling commissioned by AAR and conducted by Forbes Tate Partners shows 92 percent believed it important that freight railroads run uninterrupted by a strike. 85 percent thought an interruption in freight rail would lead to price increases. Moreover, 72 percent said Congress should act if union workers do not accept the agreement. That included 76 percent of Democrats and 71 percent of Republicans.

Joining AAR, API, and the National Grain and Feed Association in Tuesday’s call were representatives from the Retail Industry Leaders Association (RILA) and The Fertilizer Institute (TFI).