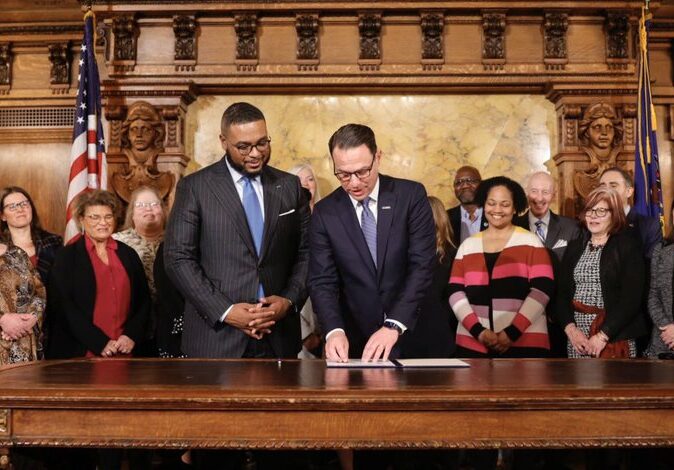 On Wednesday, Shapiro signed his first executive order, removing the four-year degree requirement from most state jobs. According to the Shapiro administration, the move affects about 65,000 positions and 550 current job vacancies, or about 92 percent of the state workforce.

“Every Pennsylvanian should have the freedom to chart their own course and have a real opportunity to succeed. They should get to decide what’s best for them – whether they want to go to college or straight into the workforce – not have that decided for them,” Shapiro said. “Today, we are making sure Pennsylvanians know that the doors of opportunity are wide open to those who want to serve our commonwealth, regardless of whether or not they have a degree.

“I want to make it clear to all Pennsylvanians, whether they went to college or they gained experience through work, job training, or an apprenticeship program: we value your skills and talents, and we want you to apply for a job with the commonwealth.”

The administration also launched a website listing all those jobs.

And, making good on a campaign promise, Shapiro ordered all state agencies under his control to emphasize work experience in hiring.

“Credentialism is a curse on American opportunity,” said Iain Murray, Competitive Enterprise Institute senior fellow. “The requirement that people study at college for four years before being able to get a professional job forces many into debt they can’t afford thereby closing off the dream of home ownership, and exposes students to the full force of academic political monoculture.

“Gov. Shapiro’s action is a welcome step towards ridding Americans of that curse.”

“This is exactly the right move for Pennsylvania, getting away from empty credentialing that forces people to spend precious time and money on degrees for no compelling reason. It’s what people know and can do — not what sheepskins they hold — that should matter in hiring,” said McCluskey said.

Also on hand were Beth Christian and Darice Mayhew, two state employees who have worked their way up in government service without a four-year degree.

“As a long-time commonwealth employee who does not have a four-year degree, Gov. Shapiro’s signing of this executive order means so much to me, both personally and professionally,” said Christian, the acting deputy secretary of administration. “This executive order tells current commonwealth employees and anyone looking to come work for the state of Pennsylvania, we support you, with or without a degree.”

Officials said that getting a four-year college degree is only one path to building skills and expertise in a particular field. According to the Department of Labor & Industry, more than seven million Pennsylvanians do not hold a four-year degree. And millions of Pennsylvanians develop skills through alternative routes such as two-year degree programs, apprenticeships, military service, job training, and on-the-job experience.

Fighting the rising tide of “credentialism” has been a hot topic among conservatives for years. Maryland Gov. Larry Hogan, who just left office after serving two terms in deep-blue Maryland, enacted a similar policy last year. “Through these efforts … we are ensuring that qualified, nondegree candidates are regularly being considered for these career-changing opportunities,” he said at the time.

Shapiro pledged to invest in apprenticeships, vocational training, and career and technical education, saying in his inaugural address “real freedom that comes when we create pathways to new opportunities by investing in vo-tech and job training programs.”

Grover Norquist of Americans for Tax Reform, a leading voice of the political right, took the opportunity to give a shout out to Pennsylvania’s new top Democrat.

“No one should have to pay tens of thousands of dollars for a college degree to be able to apply for a government job — or any job. Many Americans cannot afford to delay work and forgo four years of income for a piece of paper/college degree
Kudos to Governor Josh Shapiro for removing this barrier to work,” Norquist said.