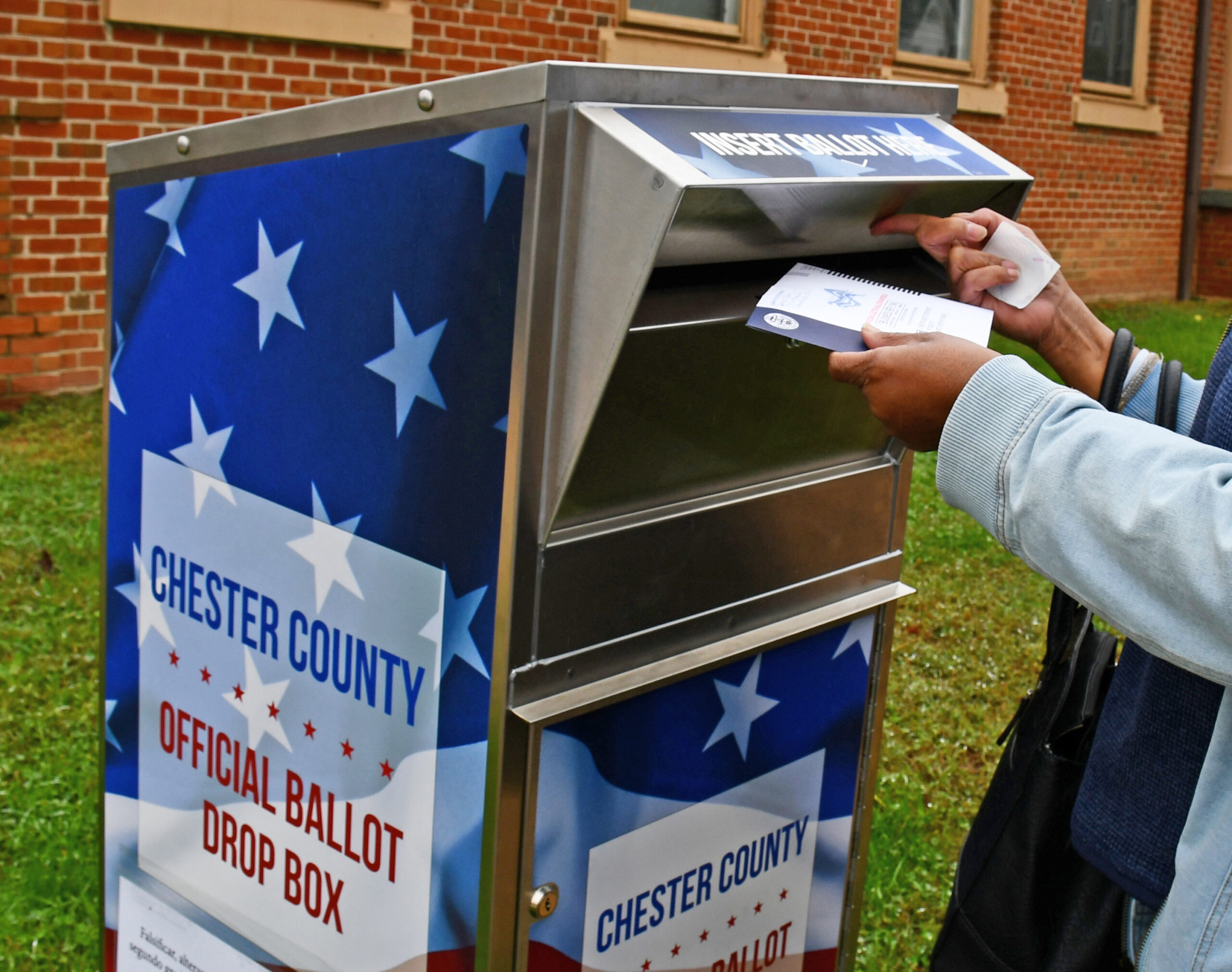 Some Delaware County residents are raising the alarm about ballot boxes that cameras may not properly tape. However, county officials insist there are not any problems.

Radnor resident Liz Madden has been going to the ballot boxes to see if the camera angles line up and found some in Radnor and Haverford townships do not.

She spoke at a recent county Board of Election meeting.

“I am concerned about four drop boxes in Radnor and Haverford. These cameras don’t see the slots in the drop boxes,” said Madden. People are only allowed to deposit one ballot for themselves unless they have a signed permission form from someone in their household who is disabled.

She asked county officials to make sure the drop boxes are aligned with the cameras.

“If Delaware County is committed to fair and honest elections, (officials should) monitor how many ballots one person puts in the drop boxes,” she said. The drop boxes that are not being correctly monitored should be closed.

Joy Schwartz was also concerned about the drop boxes and referred to an article in Broad + Liberty where John McBlain, a member of the Board of Elections, discussed deficient monitoring of the drop boxes.

“The county received a $2.1 million election integrity grant,” Schwartz said, asking that “some of the money be used for surveillance” at the 40 drop boxes in Delaware County.

That many drop boxes are “more than any other county,” she said. “Most of them are in heavily Democratic areas.”

Voter Services Director Jim Allen denied the drop boxes are in majority Democratic areas, saying there is one in every municipality. And Allen also denied McBlain’s contention that there are problems with monitoring of the video feeds from the drop boxes.

A county spokesman also told Delaware Valley Journal that Madden is wrong about the issues with the drop box camera angles.

In Chester County recently, after residents sued over voters putting multiple ballots into drop boxes, the county agreed to watch its drop boxes more closely, limit the hours and locations of them, and require human monitors.

Wally Zimolong, attorney for the plaintiffs along with America First Legal, said, “The reasons stated on the record were express representations by the Board of Elections that it would institute monitors, limited drop box hours, and a policy to assure only authorized agents of disabled persons were returning ballots that did not belong to them. These were all requested in our petition. So, there was nothing left for the Court to award or enjoin.

Zimolong added, “The judge excoriated the county. He commended us for bringing suit and stated that the board would never have done what it did without our litigation. Indeed, it was five days after the lawsuit that the board decided to change course.

“In sum, it was a complete victory for election integrity. I cannot underscore the importance of the win,” said Zimolong.

In Montgomery County, after videos showed a Democratic Party committeewoman dropping multiple ballots into a drop box in Upper Dublin for the November 2021 election, the county took steps to improve security, with both cameras and human monitors. Republican Chair Liz Havey brought that video to the attention of District Attorney Kevin Steele.

The hours and number of days of dropbox operations have also been shortened from previous elections, county officials said.

Madden, who also visited the Montgomery County drop box at the Luddington Library in Lower Merion, was impressed.

“If a voter has two ballots, the watcher looks at the permission form accompanying it, stamps that ballot with a star purchased at Staples that allows them to deposit it,” said Madden. “Montco reportedly is more than twice the size of Delco yet has only 20 ballot drop boxes and each one has Montco paid Voter Services employees guarding the boxes. Initially, community members were watching boxes and Monto Voter Services processed, but now they are gone assured their boxes are properly monitored. Also, the Montco boxes are open 8 a.m. to 8 p.m. not 24 hours like Delco’s,” said Madden.

And in Bucks County, there was a kerfuffle recently after Democratic County Commissioner and Election Board Member Bob Harvie people could deposit 100 ballots, with the proper paperwork.

Megan Brock, a community activist, said the law clearly states a person must have written permission to deposit a ballot for someone who is impaired and also may not deposit ballots for anyone outside their own household. 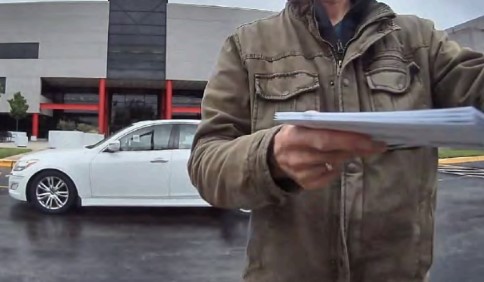 One issue that has risen to the top in this election cycle is Pennsylvania Act 77. This act was supported by many Republicans when they agreed to essentially remove any requirement to be able to vote by absentee ballot in exchange for taking away the ability of voters to vote a straight party vote at the flick of one button on election day.

Democrats essentially turned the removal excuses for absentee ballots into the ability to vote by mail in Pennsylvania–no reason required.

State Senators Doug Mastriano and Jake Corman are two of the candidates in the Republican primary for the governor’s race. They have tried to spin this misjudgment by saying Democrats distorted the intentions of Act 77 and gave us the current system that many people believe is much more open to ballot harvesting and election fraud.

In addition to mail-in ballots, Democrats in Pennsylvania approved a drop box system across the state that allows people to deposit ballots that they receive in the mail into secured boxes across the state. The law on this requires that a person may deposit only their own ballot.

On my radio show, Martin told me that he declined to prosecute anyone because only a few of the 288 people could be identified due to the mask mandate at the time and the poor quality of the video surveillance at the drop box locations. I objected to this approach and told him that much more must be done on this front to ensure that people believe in the results of our elections.

After that conversation, I was pleasantly surprised that my producer was contacted by Martin’s office, and he came on my show to announce three reforms that he was instituting or calling for. First, he wants more precise and prominently placed warnings against depositing more than one ballot to be placed on and around the drop boxes. Second, he wants the drop box at the Lehigh County Government Center to be restricted to “normal” business hours. He wants voters to believe that someone might be watching.

Finally, he will dispatch county detectives in plainclothes to periodically monitor the drop boxes. This last reform has set off some Lehigh County Democratic leaders who say these detectives are intimidating and they have to deduct from their pay for any time spent observing the drop boxes.

I believe this local battle over drop boxes is occurring all over the country and that’s why I watched the debut of Dinesh D’Souza’s new film “2000 Mules,” at an area theater with my listeners. The premise of the film, as presented by D’Souza and True The Vote, is that by using cellphone geo-tracking and surveillance video, they were able to follow a network of “mules “in battleground states collecting ballots from get-out-the-vote outfits and then stuffing them a few at a time in multiple drop boxes, often in the middle of the night.

D’Souza concedes that in Michigan and Wisconsin the “mules” they have observed would not have deposited enough votes to overcome President Joe Biden’s margin of victory. However, he maintains that in Georgia and Arizona, their observations turn up more than enough votes to secure victory for former President Donald Trump in those states.

Incredibly, in Philadelphia alone, he maintains that 1,100 mules averaged 50 drop box visits each giving us 275,000 suspect votes that could have flipped Pennsylvania from Biden to Trump.

The film is well researched and tells the story in great detail. Even if you reject its premise about the numbers of suspect drop box votes, it underlines the need to remove mail-in balloting from our elections or continue to suffer a lack of confidence in election results.