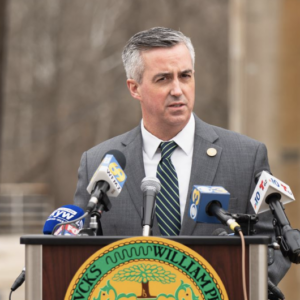 Bucks County says a hypothetical example Commissioner Bob Harvie (D) used at a recent board meeting about the legality of dropping off more than one ballot was “inartful,” but the county declined to elaborate further, even though Harvie’s comments appear to be directly contradicted by multiple documents from the Pennsylvania Department of State.

The issue is yet another example of the lingering controversies, misunderstandings, and debates that continue about Pennsylvania’s mail-in ballot procedures, especially where dropboxes are concerned — laws that even Gov. Tom Wolf (D.) admitted to breaking because of ignorance.

During the citizen comment portion of the meeting, a man raised issues of election integrity, and commended the council for a decision to place most of the county’s dropboxes in indoors locations like libraries and courthouses, so that the dropboxes would not be available but unattended in overnight hours.

The same man asked if it was possible for the county to create a count of persons who used the dropbox each day, and compare that to the number of ballots received in the respective dropbox each day, suggesting that there be a one-to-one ratio.

“Pennsylvania law does allow someone to drop off more than one ballot if they have a designated-agent form for the person whose ballot they are dropping off, if it’s not theirs. If you go, you could go — under the law you could go to a senior center or a nursing home, and get a hundred ballots, as long as you have 100 designated-agent forms from each of those voters, you’re allowed to bring 100 ballots. That’s the law. So the idea that one person can’t bring two ballots is inaccurate,” Harvey said.

Harvie is not just a commissioner, but is also the chairman of the county’s board of elections.

The comment was flagged by Bucks County resident Megan Brock, who has built a profile as a political activist in the county and around the southeast portion of the state.

Pennsylvania law allows for a person to only drop off their own ballot, with one exception. If a person is disabled, they may name someone their “designated agent” to drop off their ballot, and they must fill out a form memorializing the relationship.

However, as the guidance on the form provided by the Department of State notes, “[t]he person you designate as your agent is only allowed to serve as a designated agent for ONE voter, unless the additional voter(s) live in the same household as you,” (emphasis original).

By those rules, a person could not deliver 100 ballots, as Harvie seemed to suggest.

Another document, also from the Department of State, addresses the exact hypothetical Harvie used in terms of nursing homes.

“A ‘household’ for the purpose of designating an agent does not include a long-term care facility,” the guidance says.

The county said Harvey’s remarks were made in an ongoing struggle with citizen activists.

“It is disappointing, but not surprising, that an inartful example provided in response to false claims from election deniers would become a cudgel for individuals who promote distrust in our elections,” said Bucks County spokesman James O’Malley.

“The Commissioner was responding to a stream of lies and misinformation about our elections, which have been repeated ad nauseum, without evidence, at public meetings in Bucks County. Unfortunately, these are the same types of lies we’ve seen perpetuated across the country — lies which have inspired voter intimidation and violence, like the January 6th insurrection and last week’s horrific attack on the husband of the Speaker of the House,” he continued.

“The Bucks County Board of Elections has always followed state and federal law and will continue to do so in the upcoming election, to ensure the right to vote is protected. The law provides that a designated agent may return ballots for more than one voter under certain circumstances,” O’Malley concluded.

Broad + Liberty did not ask the county if it was in violation of any state or federal law, but only whether Harvie’s example was a legally accurate one.

The Department of State did not respond to requests for comment.

The Bucks County GOP emailed a statement from the organization, not attributable to a single individual, saying it was “shocked by the inaccuracy of this incorrect statement from a Commissioner, who also serves as the Chairman of the Board of Elections.”

“His statement is clearly wrong, and tantamount to approving ballot harvesting, in nursing homes,” the statement added.

Brock’s tweet thread, which also provided documentation from the Department of State, had about 4,500 likes at the time of this publication.

Although Harvie’s hypothetical of someone collecting 100 ballots from a single nursing home seems absurd, what has been proven is scores of evidence of people dropping off multiple ballots in dropboxes. That does not necessarily mean the ballots are fraudulent, or would even be discarded.

For example, a group in Chester County used the Pennsylvania Right to Know law to obtain surveillance video of one dropbox used in the 2020 general and 2021 primary election. The video yielded dozens of instances of people dropping off multiple ballots — as many as eight at one time one screenshot shows.

The video evidence was persuasive such that the county promised a judge it would implement stringent new monitoring procedures for dropboxes in use for this Election Day.

Shortly after the general election last year, Gov. Wolf admitted he had broken the law by turning in his ballot along with his wife’s at a dropbox. Philadelphia Mayor Jim Kenney nearly broke the law in 2020, but was rescued by an onsite dropbox monitor.

This spring, Lehigh County said it had evidence that hundreds of people had dropped off multiple ballots at dropboxes, likely in violation of the law, but that it would not seek prosecution of anyone. Despite those findings, a judge threw out a lawsuit seeking to force the county into tougher dropbox monitoring standards, like the ones to which Chester County voluntarily agreed.