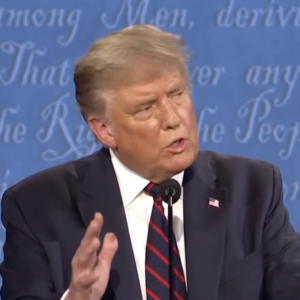 A lawyer for the Trump campaign is demanding answers from the Philadelphia Board of City Commissioners after a photograph appeared to show Mayor Jim Kenney violating election law, the Delaware Valley Journal has learned.

Kenney explained his actions and said no laws were broken.

The complaint is in a letter to the Board of Commissioners, obtained exclusively by the Delaware Valley Journal, and is a follow-up to one the Trump campaign sent last week. The new complaint was sparked by a picture of Kenney that appeared in Thursday’s Philadelphia Inquirer.

Because of Pennsylvania’s laws against ballot harvesting, people can only mail their own ballots, not those of other voters. To mail or drop off someone else’s ballot, you must have a “Designated Agent” form in which the voter authorizes you to do so.

But the photo appears to show Mayor Kenney dropping off two ballots with no “Designated Agent” form.

“We ask that your office provide an explanation. If the general public views a photograph of the Mayor of Philadelphia delivering what appears to be two ballots to a dropbox, without a Designated Agent form in sight, the danger exists that the public could view this as the Mayor condoning third party delivery of ballots without following the law of this Commonwealth,” attorney Linda Kerns wrote.

This argument expands on a letter Kerns and the campaign sent to the city last week.

“To preserve the integrity of the election, the Campaign demands that the use of unmanned dropboxes in Philadelphia immediately cease,” the earlier letter said, in part to prevent people from illegally dropping off more than one ballot.

Mayor Kenney’s office told Delaware Valley Journal that the mayor followed the law, thanks to the advice of an elections official on the spot.

“The Mayor was also carrying a mail-in ballot belonging to a person with whom he is personally close,” Kenney’s spokesman Mike Dunn said. “The elections official standing with him in the photograph informed him that he was not allowed to deposit that person’s ballot. The Mayor then deposited only his own ballot into the drop box.”

“The mayor’s response proves just how right the Trump Campaign is: a Board of Elections representative must staff each dropbox and help voters avoid illegal ballot harvesting,” said Thea McDonald, a press secretary with the campaign.

“The mayor almost broke the law. He should join with President Trump’s campaign to give his constituents the same benefits he received from that poll worker. President Trump has long fought for a free, fair election in Pennsylvania—he won in the fight to ensure ballot harvesting remained illegal, and today we continue the fight to protect voters and ensure the integrity of the election. Pennsylvania voters deserve answers on the critical issues the Trump Campaign has raised.”

Team Trump says it has at least three photos or videos of people dropping off multiple ballots at dropboxes in the city. That drew the ire of Attorney General Josh Shapiro, a Democrat.

“Our entire system of voting is built on your ballot being private and your choice to vote being a personal one,” Shapiro told the Inquirer. “Depending on the circumstance, the act of photographing or recording a voter casting a ballot could be voter intimidation — which is illegal.”

“As you know, a plethora of people, ranging from members of the media to private citizens to government officials, have been shooting video and taking photographs of the activity at or near the Satellite Election Offices,” Kerns wrote. “The videos and photos appear on social media as well as in news reports. Commissioner [Al] Schmidt regularly tweets out videos of individuals at the dropboxes.”

The Trump campaign requested a copy of the surveillance video the city is creating at City Hall so it can review it for other possible infractions.

The latest fight is part of an ongoing dispute between the Trump campaign and the city about the legality of poll watchers at “satellite elections offices” which moved forward this week when an appeal was heard by a three-judge panel in Commonwealth Court. A ruling is expected soon.

In the first presidential debate, President Trump aired his concerns to a national audience.

“In Philadelphia they went in to watch,” Trump said at the September debate. “They’re called poll watchers. A very safe, very nice thing. They were thrown out. They weren’t allowed to watch. You know why? Because bad things happen in Philadelphia, bad things.”

The Trump campaign had tried to place poll watchers in locations the city was calling “satellite election offices.” The campaign sued after the city claimed that the locations were not polling places and continued to bar poll watchers from entering.

None of the three elections commissioners responded to a request for comment from Delaware Valley Journal.

A lawsuit from earlier in the year by the Trump campaign to prohibit the use of dropboxes in the state was dismissed.