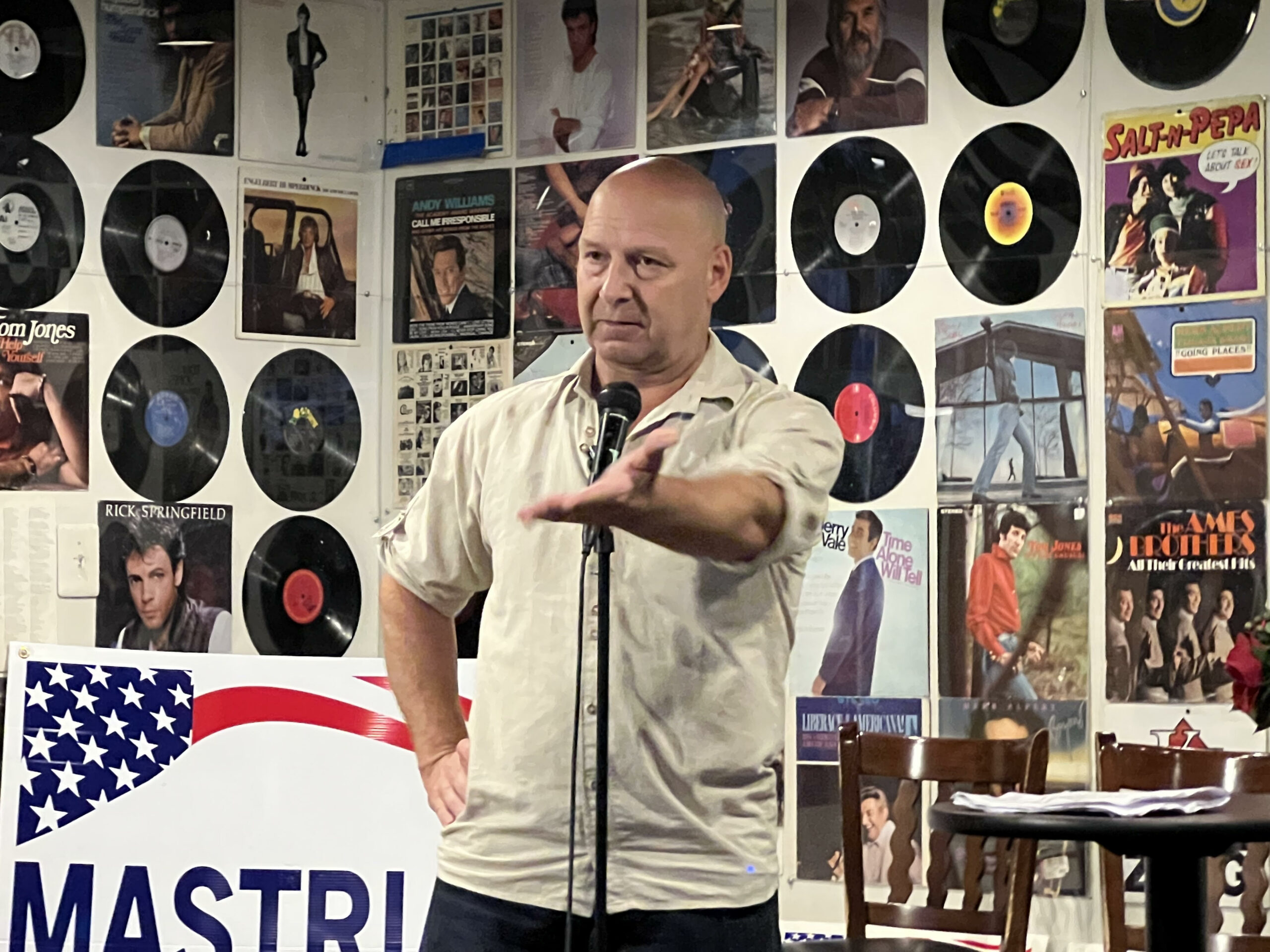 Before addressing the crowd, Mastriano shook hands and posed for pictures, along with his wife, Rebecca. Dave White, a Delaware County businessman and former Delaware County councilman who also ran for governor, introduced Mastriano.

“We came out of a contentious primary but in that primary, you had nine people that had nine great ideas and the people spoke,” said White, who has traveled the state supporting Mastriano. “And this is the time to come together. If you believe in economic development and tapping our resources and making Pennsylvania the energy capital of the United States, join this team. If you believe in school choice…we need Gov. Mastriano.”

Mastriano spoke for about 40 minutes, touching on various issues and getting in a few jabs at his Democrat opponent Attorney General Josh Shapiro as well as the press, which has not been kind to him. Every few sentences, the crowd cheered, applauded, or called out encouragement. 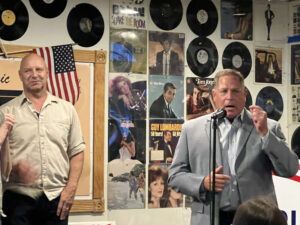 “The irony of coming to a state where our governor got it all wrong,” said Mastriano. “Ron DeSantis is showing us the way ahead for Pennsylvania. Our goal is to make Pennsylvania the Florida of the north.”

“My opponent spent $12 million and has nothing to show for it. He had no primary…He’s going to lose bad.”

“Sadly, Josh’s message is one of darkness and hate and division,” said Mastriano. “Of name calling, which Democrats are good at. And media, he has a six-year record as attorney general, won’t you even talk about that? No, because you like him.”

“He can’t run on his record because he’s a failure,” said Mastriano. “He’s been the attorney general for six years and crime has gone up 37 percent on his watch. Now Pennsylvania is the 12th highest in homicide, the senior law enforcement official…This guy’s incompetent. We ought to throw the bum out.”

“On his watch, we’re the 8th highest in overdoses,” he said.  “The fourth highest in Fentanyl. Sex trafficking is through the roof. He looks the other way with illegals.”

Instead of fighting crime, Shapiro sued the Little Sisters of the Poor, he said.

“Yes, he’s running lots of ads,” said Mastriano. “If anyone believes those ads I’ve got a bridge to sell you in Brooklyn, cheap. As my Afghan friends said, ‘best friend price.’”

Mastriano served in the Army for 30 years and retired as a colonel before winning a seat in the state Senate to represent Franklin County. He also holds a Ph.D. in history.

He called the Biden administration’s botched withdrawal from Afghanistan “disgusting,” and asked for a show of hands for Afghan veterans. “That just tore my heart out and I’m sure it’s a similar feeling to what the Vietnam veterans saw in 1975 with the fall of Saigon. Sheer incompetence. That incompetence emboldened tyrants like Putin. And I will note that Vladimir Putin behaved under Donald Trump, so we need old 45 to come rolling back.”

Trump endorsed Mastriano and plans to rally with him and Senate candidate Dr. Mehmet Oz in Wilkes-Barre on Sept. 3.

The Shapiro campaign has attacked Mastriano’s pro-life stand and, with the demise of Roe v. Wade, it has become an election issue.

About 20 demonstrators with pro-choice signs stood outside Gatsby’s before the Mastriano event and listened to remarks by Delaware County Party Chairwoman Colleen Guiney and state Sen. John Kane (D-Delaware/Chester).

“We believe that women have bodily autonomy,” she said, saying that they stand with Shapiro on women’s rights. Mastriano “has said, ‘Abortion should end right now and we should have no exceptions.’ That 11-year-old child has been victimized by a family member and is pregnant, she should carry that child to term. We don’t believe that is his choice. That is the choice of the child and their family and their doctor…I don’t believe doctors should do and I don’t believe women should go to jail for having healthcare in the United States of America.”

Kane said, “Yo, Doug Mastriano, you come into Delco with your no-comment express press conference. Delaware County does not want an extremist like you here.”

Asked by Delaware Valley Journal why Shapiro funded commercials that boosted Mastriano’s campaign during the GOP primary if he is such a ‘dangerous extremist,’ Kane said, “He wanted to make sure everybody knows what Doug Mastriano is all about. Doug Mastriano…when you’re taking rights away from women when you’re still talking about the election being stolen. When I got sworn in, I got sworn in with an awful lot of Republicans at the same time. Nobody ended up saying their election was stolen.”

During the rally, Mastriano introduced his wife, Rebecca, to talk about women’s rights.

“We believe in a women’s right to be born,” she said, and listed other rights such as safety, children’s education, and a “right to access baby formula and affordable groceries.”

“They don’t want to talk about inflation,” said Mastriano. “It’s so bad that even Jimmy Carter is looking decent now.”

“They don’t want to talk about the cities being burned to the ground just down the road from here, the Summer of Love,” he said.

Mastriano promised he would end Pennsylvania as a “sanctuary state.”

“When those ghost flights come into our airports, I’ll have the beautiful Pennsylvania State Police meeting those flights and…escorting those buses down to Joe Biden’s house in Delaware.” He praised law enforcement and mentioned that he’d gotten the state FOP’s endorsement. 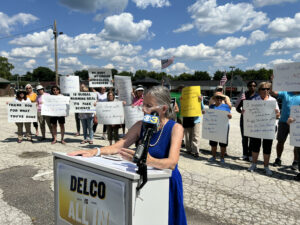 Mastriano also promised to take the state out of the Regional Greenhouse Gas Initiative that is driving up the cost of electricity and to bring energy jobs back to Pennsylvania.

“Our country is falling apart. I need to stick up for my children. I need to be able to tell my children I fought for our country,” said Maureen Willis of Landenberg, a former Democrat.

And Drexel Hill resident Richard Pruett said, “I support Doug, just like Donald Trump is supporting Doug. He believes in freedom. He believes in American first, energy independence. I love the fact he fought for us in battle, that he’s a colonel and on Day One he’ll open up the pipeline.”

Claim: Upper Darby Financial Fight Is Under Investigation by DA 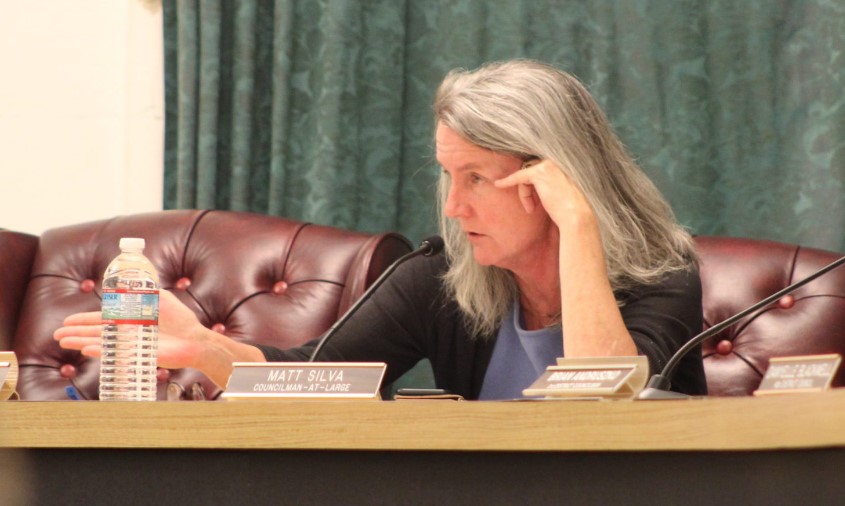 A former finance director for Upper Darby says the Delaware County district attorney’s office is investigating the ongoing financial fight in the township, in which a bipartisan group of township councilors have accused Democrat Mayor Barbarann Keffer’s administration of inappropriately transferring funds.

When contacted by Broad + Liberty about Wednesday’s township council meeting, Gary Merron (D) said, “I am witness in an ongoing investigation concerning this matter, and have been advised by law enforcement that I should not comment at this time.”

He later clarified that the law enforcement agency was the Delaware County DA’s office.

The district attorney’s office did not return a request seeking to verify Merron’s claim. Similarly, a request for comment to Mayor Keffer was not returned.

Merron resigned in September 2021 without controversy.

Merron’s claim comes in a week in which tensions continued to rise in the now three-months-long affair which has pitted Mayor Keffer and Chief Administrative Officer Vince Rongione, both Democrats, against six members of council — three Democrats and three Republicans.

The controversy first spilled into the public eye in February, after Upper Darby Treasurer David Haman (D) gave a presentation in which he said he was having difficulty tracking the township’s funds received from the federal American Rescue Plan Act, or ARPA.

While the number and kind of allegations has multiplied since that meeting, the core allegation at the time was that certain bank accounts that would have contained the township’s ARPA funds showed balances lower than they should have, raising questions about when and how monies were moved.

The group of six said they were having difficulty getting a full accounting from Keffer and Rongione, and two weeks later authorized an independent investigation by an outside firm.

Since then, the accusations and maneuverings have only multiplied.

Last Thursday, Mayor Keffer released the results of an audit from Marcum, LLP, that Keffer ordered in the wake of the accusations of the February meeting. The Marcum investigation ran independently of the one authorized by council.

“Despite numerous interviews, NO person reported or provided information alleging misuse of the ARPA proceeds,” reads a summary of the Marcum audit from the mayor, among other key findings.

Keffer also held a town hall with two of the Marcum auditors to answer questions, and live-streamed it on the township’s YouTube page.

Merron’s claim that he was speaking with a law enforcement agency was also noted in the Marcum report.

Council members and critics of the report say that the Marcum investigation only had access to a select number of township accounts — but not all — making the findings incomplete.

On Tuesday, Rongione issued a press release accusing the council of violating elements of the township’s home rule charter. According to the release, Keffer said the alleged violations had become, “flagrant, obvious, and damaging to our community[.]” She cited a legal analysis that said the violations could be remedied by removal from office.

Finally, at Wednesday’s council meeting, members of the group of six allied against the administration were clearly eager to begin pressing the administration for more answers in response to the Marcum report, but were stymied by legal technicalities.

For example, when councilman Brian Andruszko (R) began to question Rongione about whether the township had gone over budget in 2021, the assistant township solicitor recommended that the discussion was out of bounds because it did not hold strictly to the title of the agenda item, “Discussion regarding ARPA funds.” Council President Brian Burke (D) accepted the recommendation and stopped discussion.

Also at Wednesday’s meeting, the group of six passed a motion to appoint an accounting firm to wrap up the separate investigation they approved at about the same time Keffer authorized the Marcum audit.

Merron’s name appears more than 100 times in the Marcum report. Haman says most of the questionable activity came after Merron left office.

The duties of a treasurer can vary widely across the many governments in Pennsylvania. In Upper Darby, the treasurer has very little authority over the many accounts in the township’s name. Haman says his role is mainly one of oversight.

Haman also says he is working independently to formulate his own official response to the Marcum report. That report would be separate from the investigation still ongoing from council.

All the while, the township has not allocated any of the ARPA funds to any projects. Keffer and Rongione have argued the Marcum report has provided enough clarity to allow some funding to begin. The clutch of six councilors, however, have said a completely transparent understanding of the money must be in hand before project funding can begin.

This article previously ran in Broad and Liberty.