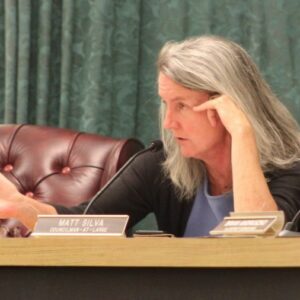 Claim: Upper Darby Financial Fight Is Under Investigation by DA

A former finance director for Upper Darby says the Delaware County district attorney’s office is investigating the ongoing financial fight in the township, in which a bipartisan group of township councilors have accused Democrat Mayor Barbarann Keffer’s administration of inappropriately transferring funds.

When contacted by Broad + Liberty about Wednesday’s township council meeting, Gary Merron (D) said, “I am witness in an ongoing investigation concerning this matter, and have been advised by law enforcement that I should not comment at this time.”

He later clarified that the law enforcement agency was the Delaware County DA’s office.

The district attorney’s office did not return a request seeking to verify Merron’s claim. Similarly, a request for comment to Mayor Keffer was not returned.

Merron resigned in September 2021 without controversy.

Merron’s claim comes in a week in which tensions continued to rise in the now three-months-long affair which has pitted Mayor Keffer and Chief Administrative Officer Vince Rongione, both Democrats, against six members of council — three Democrats and three Republicans.

The controversy first spilled into the public eye in February, after Upper Darby Treasurer David Haman (D) gave a presentation in which he said he was having difficulty tracking the township’s funds received from the federal American Rescue Plan Act, or ARPA.

While the number and kind of allegations has multiplied since that meeting, the core allegation at the time was that certain bank accounts that would have contained the township’s ARPA funds showed balances lower than they should have, raising questions about when and how monies were moved.

The group of six said they were having difficulty getting a full accounting from Keffer and Rongione, and two weeks later authorized an independent investigation by an outside firm.

Since then, the accusations and maneuverings have only multiplied.

Last Thursday, Mayor Keffer released the results of an audit from Marcum, LLP, that Keffer ordered in the wake of the accusations of the February meeting. The Marcum investigation ran independently of the one authorized by council.

“Despite numerous interviews, NO person reported or provided information alleging misuse of the ARPA proceeds,” reads a summary of the Marcum audit from the mayor, among other key findings.

Keffer also held a town hall with two of the Marcum auditors to answer questions, and live-streamed it on the township’s YouTube page.

Merron’s claim that he was speaking with a law enforcement agency was also noted in the Marcum report.

Council members and critics of the report say that the Marcum investigation only had access to a select number of township accounts — but not all — making the findings incomplete.

On Tuesday, Rongione issued a press release accusing the council of violating elements of the township’s home rule charter. According to the release, Keffer said the alleged violations had become, “flagrant, obvious, and damaging to our community[.]” She cited a legal analysis that said the violations could be remedied by removal from office.

Finally, at Wednesday’s council meeting, members of the group of six allied against the administration were clearly eager to begin pressing the administration for more answers in response to the Marcum report, but were stymied by legal technicalities.

For example, when councilman Brian Andruszko (R) began to question Rongione about whether the township had gone over budget in 2021, the assistant township solicitor recommended that the discussion was out of bounds because it did not hold strictly to the title of the agenda item, “Discussion regarding ARPA funds.” Council President Brian Burke (D) accepted the recommendation and stopped discussion.

Also at Wednesday’s meeting, the group of six passed a motion to appoint an accounting firm to wrap up the separate investigation they approved at about the same time Keffer authorized the Marcum audit.

Merron’s name appears more than 100 times in the Marcum report. Haman says most of the questionable activity came after Merron left office.

The duties of a treasurer can vary widely across the many governments in Pennsylvania. In Upper Darby, the treasurer has very little authority over the many accounts in the township’s name. Haman says his role is mainly one of oversight.

Haman also says he is working independently to formulate his own official response to the Marcum report. That report would be separate from the investigation still ongoing from council.

All the while, the township has not allocated any of the ARPA funds to any projects. Keffer and Rongione have argued the Marcum report has provided enough clarity to allow some funding to begin. The clutch of six councilors, however, have said a completely transparent understanding of the money must be in hand before project funding can begin.

This article previously ran in Broad and Liberty.