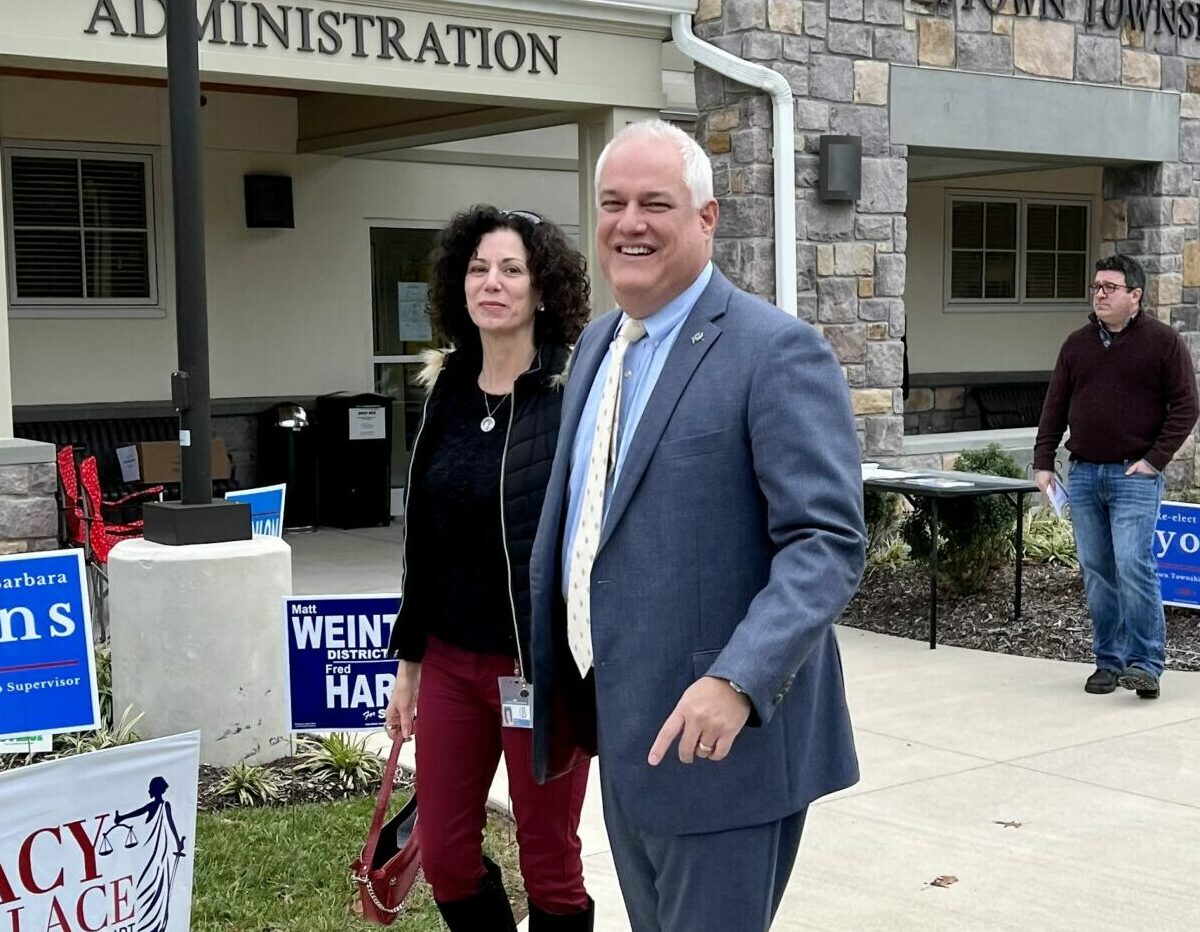 Bucks County incumbent Republican District Attorney Matthew Weintraub easily won re-election Tuesday, 58 percent to 41 percent over Democratic challenger Antonietta Stancu. And that may be just the beginning of the good news for the Bucks County GOP.

In the unofficial tallies, Republicans appear to have won some of the county row offices as well, with Fred Harran leading Democrat Mark Lomax in the sheriff’s race, 53-46 percent. Coleen Christian holds a similar lead over Democrat Judi Reiss for county prothonotary.

“It had been an honor to serve the citizens of Bucks County these last four years,” said Dougherty. “Working with the incredible team of caring and dedicated professionals here in the controller’s office has been a privilege. Congratulations to my opponent, I wish her all the best going forward.”

In Delaware County, Democrat candidates have pulled ahead for the county row offices, with incumbent Sheriff Jerry Sanders topping challenger Larry Weigand 51 percent to 48 percent. However, mail-in ballots were still being counted there Wednesday morning.

GOP Chairman Thomas McGarrigle noted the Republicans had been ahead Tuesday night, but the mail-in ballots are breaking Democratic. In many municipal races, like Upper Darby and Collingdale, Republicans are doing well. McGarrigle also chided county officials for their clumsy handling of the elections.

“You look at the county, it’s clear they can’t govern and the residents of Delaware County have seen that,” said McGarrigle, noting the Republicans ran clean, fair, and efficient elections there for 150 years.

“This is the fourth election these individuals have run and we’ve had problem after problem,” McGarrigle said. “We took them to court because 5,000 plus ballots were mailed out after the deadline.”

In Chester County, where mail-in votes were also still in the counting process Wednesday morning, it remains a nail-biter.

Republicans were hanging on to a lead in some of the county row offices including Jeanna Nicholas at 50 percent to incumbent Patricia Maisano at 47 percent and Controller Margaret Reif at 49 percent to challenger Regina Mauro at 50 percent.

“I would like to thank and congratulate all of our candidates, campaign workers, and volunteers from the top to the bottom of the ticket for the work they have done during this election cycle,” Chester County Democratic Chairwoman Charlotte Valyo said in a statement.

“Our candidates ran positive, fair campaigns focused on issues, facts, and accomplishments. The ballot counting in Chester County will continue today. Mail-in ballots that were received by mail or in drop boxes after 7:00 p.m. Friday, October 29 until 8:00 p.m. Tuesday, November 2 are still being processed.

“The initial results for the state judicial and county-wide races are very favorable. Mail-in ballots cast during an election are primarily cast by Democratic voters. If this trend continues, I see a victory for the voters of Chester County.”

Montgomery County’s row offices were not up for grabs in this election, but the county had municipal and school board races, as well as judicial contests.

Early Wednesday morning, Montgomery County GOP Chairwoman Elizabeth Havey Preate said, “The county has not completed the count as they had expected. But it appears Republicans had a great night winning in several blue townships across Montgomery County.”

Statewide there were several judgeships on the line, including a seat on the state Supreme Court.

While Republican Committee Chairwoman Ronna McDaniel predicted a “red wave” will sweep the country next year, Temple University political science department chair Professor Robin Kolodny said the most important factor for the 2022 midterms is likely how the redistricting maps are drawn.

“Probably the most important issue right now for the midterm elections is how the new maps will look in certain key states. Expect some surprising court decisions in some places,” she said.