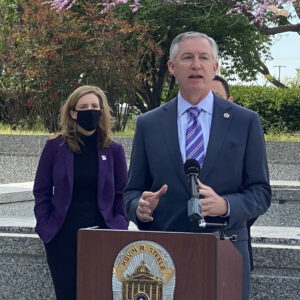 In total, 93 firearms were stolen. Just 33 firearms have been recovered by law enforcement, leaving 60 firearms on the streets and unaccounted for.

In adult court, two adults and two direct-filed juveniles, all from Philadelphia, were charged: Angel Mason, 40, of Poplar Street, Elijah Terrell, 16, also of Poplar Street, Donte Purnell, 22, of Olympus Place, and Liv Hall, 18, of Parish Street. Nine juveniles from West Philadelphia, who ranged in age from 14 to 17 years old, were charged in Juvenile Court and their names were not released.

The three burglaries and an attempted burglary of gun stores occurred between Sept. 24, 2022, and Nov. 20, 2022. All were overnight burglaries that occurred between 2 and 4:30 a.m. In each successful burglary, a group of the defendants gained access to each gun store, smashed glass display cases and grabbed numerous firearms before fleeing. The details of each burglary are:

· Sept. 24, 2022 (4:22 a.m.): Founding Fathers Outfitters, Lafayette Hill section of Springfield Township, Montgomery County: 26 firearms stolen, 6 recovered to date by law enforcement, including one used in a shooting incident in Philadelphia and one found on a suspect involved in a Sept. 29, 2022 homicide in Philadelphia. Also of note regarding this burglary, the burglars drove a 2020 Kia Forte that had been stolen in Philadelphia just prior to the burglary.

· Nov. 20, 2022 (2:15 a.m.): Attempted Burglary of Continental Armory in Hatboro in Montgomery County; burglary was interrupted when an individual heard breaking glass and called 911.

Through the use of numerous investigative techniques including interviews, physical surveillance, video surveillance, social media analysis and cellphone data and records, the investigation found that several members of a known, neighborhood-based juvenile street gang in Philadelphia—called “54th Street”—were responsible for the three completed gun store burglaries and one attempted gun store burglary in Montgomery and Bucks counties. The evidence found that the group also planned and had not yet executed two additional gun store burglaries. Criminal activity commonly associated with “54th Street” includes, but is not limited to, car-jackings, robberies, burglaries and gun violence, especially directed at rival groups.

The completed gun store burglaries resulted in 93 stolen guns. Detectives found that those stolen firearms were rapidly distributed and illegally transferred between members of the corrupt organization and to others, which led to the use of these stolen guns to commit crimes.

Of the 33 recovered stolen firearms, several have been recovered by law enforcement during the commission of crimes.

· Sept. 26, 2022: a Glock 17 firearm stolen two days earlier was recovered by Philadelphia Police in the possession of Ellijah Terrell on scene of an armed robbery at 5500 Poplar Street in Philadelphia;

· Oct. 5, 2022: an H&K 9mm firearm stolen during the Sept. 24, 2022 burglary was recovered by Philadelphia Police when they executed a search warrant related to a Sept. 29, 2022 shooting at 54th Street and Willows Avenue where a 16-year-old died of a gunshot wound to the head and a 14-year-old was also shot but survived,

· Dec. 14, 2022: a firearm stolen from the Tanner Sports Center burglary was recovered by Pensauken, N.J. Police after it was used by juvenile in an armed robbery.

“These defendants brazenly broke into gun stores and stole nearly 100 firearms, then sold and transferred them widely throughout Southeastern Pennsylvania, New Jersey and Delaware. With 60 firearms unaccounted for, we still don’t know the extent of the damage by this corrupt organization’s criminal activities, including shootings and murders,” said Steele.

“These arrests have made our communities safer and came about because of the excellent joint investigation with our numerous local, state and federal law enforcement partners.”

“DA Steele took the word that I would use to describe this organized criminal rampage right out of my mouth: ‘Brazen,” said Weintraub. “Together, we fight hard every day against lawless criminals that steal and use crime guns to terrorize our communities, regardless of whose borders they cross. And we will not rest. More to come.”

One of the key partners in this joint investigation was the ATF. “Burglaries of federal firearms licensees are a top priority for ATF, and we are eager to hold the responsible parties accountable for their actions,” said ATF SAIC DeGree. “The theft of firearms from FFLs and their diversion into the illegal firearms marketplace is a very serious crime that affects all the citizens of the Commonwealth. We will continue to work alongside our local, county, state and federal partners to seek justice for anyone who violates the federal firearms laws.”

Charges vary by defendant, but all include felony charges related to operating a corrupt organization, conspiracy, criminal use of a communications facility and firearms trafficking charges. Other charges against defendants include burglary,  criminal trespass, robbery, theft, receiving stolen property, aggravated assault, simple assault, recklessly endangering another person, fleeing or attempting to elude a police officer and possessing an instrument of crime.