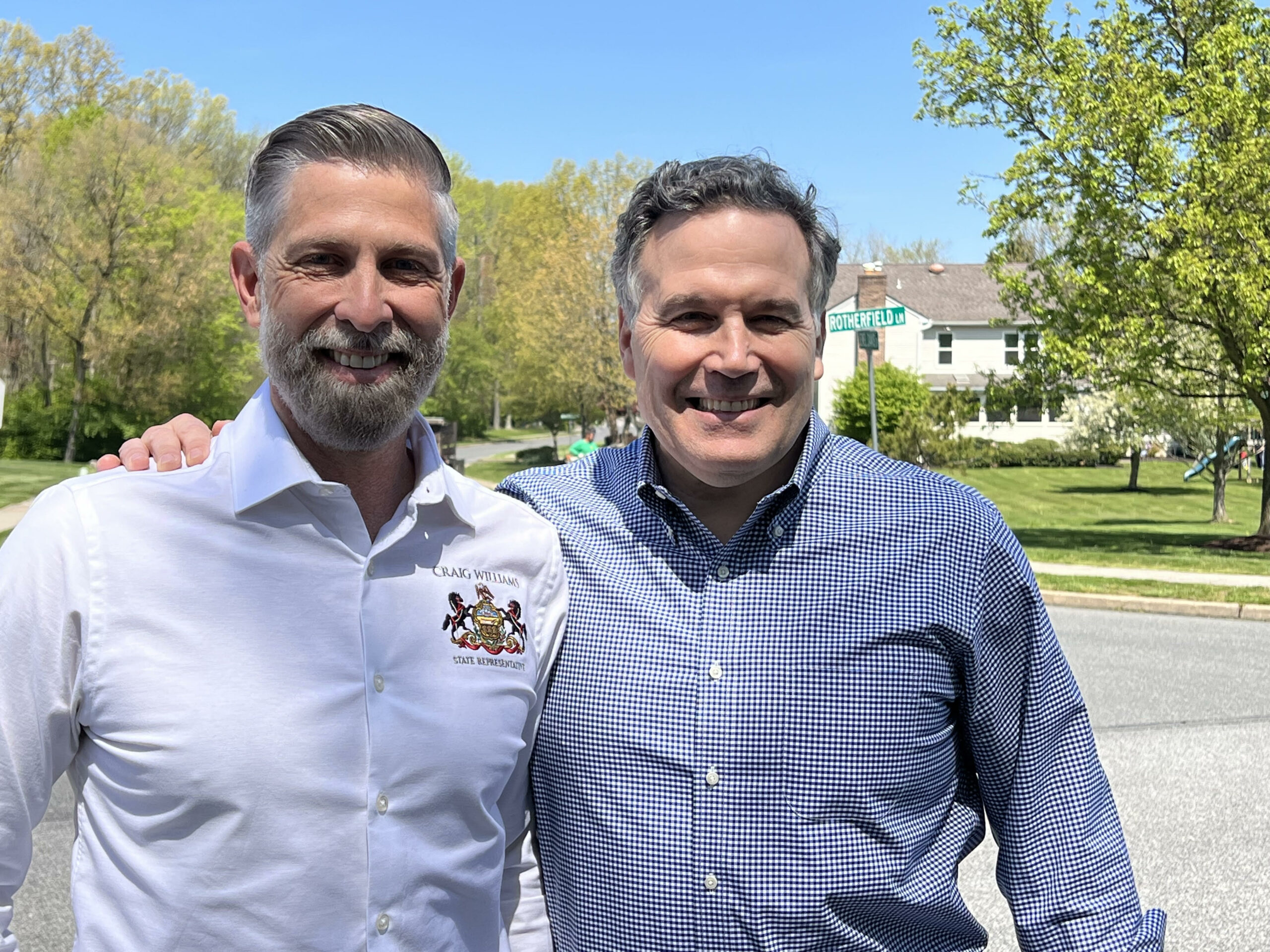 Williams said he enjoys meeting his constituents in person and typically knocks on more than 2,000 doors during his campaigns.

“My favorite part (of campaigning) is knocking on doors,” said Williams.

McCormick also enjoys talking to potential voters and has made in-person campaigning, whether knocking on doors or pressing the flesh in diners and American Legion halls, a trademark of his campaign. 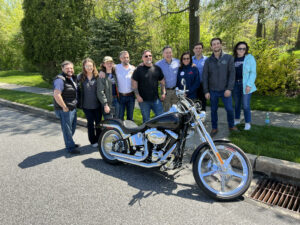 Rep. Williams and Dave McCormick, along with volunteers pose with a Harley Davidson motorcycle. A TV commercial shows McCormick riding his Harley Davidson Fat Boy. And when the weather is nice, he often rides it around Pittsburgh.

“I love it, I mean, I love it,” said McCormick. “If you knock on 10 doors and talk to one or two people, you get the connection.”

McCormick likes to hear voters’ opinions, telling him what they like or hate.

“It’s perfect,” he said. “I love it. I love being with (Williams). He’s a great guy. This is a great part of Pennsylvania that I need to spend more time in. I’m really devoted to spending time here in the southeast. It makes sure my message is out there.”

And it was a family affair, with McCormick’s wife, Dina Powell McCormick, who was a deputy national security advisor to former President Donald Trump, accompanying him and Williams’ 12-year-old son, Cole, also along, as well as campaign volunteers and staff.

McCormick, who is vying for the lead in the Republican Senate primary race with television celebrity Dr. Mehmet Oz and commentator Kathy Barnette, also has ads blanketing television screens, either from his campaign or a Super PAC that supports him. A former hedge fund CEO, he comes across as a down-to-earth, regular guy.

“I hope to get your vote,” he says to homeowners after a brief exchange and introduction from Williams, who has an app that tells him which houses belong to registered Republicans. Only Republicans or Democrats can vote for their respective candidates in the May 17 primary. 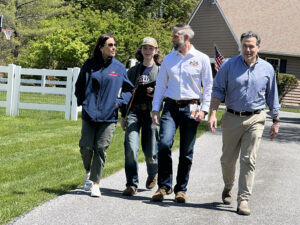 His wife, Debbi Kent, said, “He keeps saying, ‘the stakes are high,’ and we agree. We want the best person in the Senate, and I was very unhappy (with Sen. Pat Toomey). I want to learn more.”

She was “surprised but appreciative” that McCormick came to her door. “That shows he’s serious and wants to meet the people.”

Another resident, Joe Dailey, said that he was from Bloomsburg but did not know McCormick, who went to high school there when his dad was president of Bloomsburg University and chancellor of the Pennsylvania State System of Higher Education.  The family also owns a Christmas tree farm nearby that has been featured in McCormick’s TV commercials.

McCormick, 56, graduated from West Point, where he was on the wrestling team and served in the first Gulf War with the 82nd Airborne. He also served in several positions in the George W. Bush administration, including as Under Secretary of the Treasury, and he holds a Ph.D. in international relations from Princeton. In the private sector, McCormick was CEO of a software company in Pittsburgh and most recently held the CEO post at Bridgewater Associates.

During a talk at a VFW Post in Bensalem, McCormick said the Biden administration’s botched handling of the Afghanistan withdrawal led to his decision to run for the Senate.

“I’ve seen his ads,” said Dailey. “I’m a big fan of his. I like what he has to say. And Craig (Williams) is the best guy we’ve ever had here. Good luck to you guys. I will vote for you.”

Williams (R-Chadds Ford) also served in the military. He spent three decades in the Marines, retiring as a colonel.  The two candidates bantered about which of their rival branches of the service was best as they walked the neighborhood.