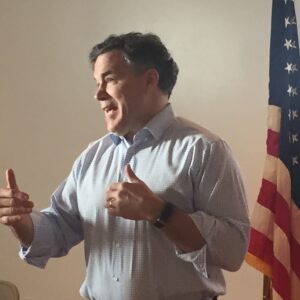 Republican U.S. Senate candidate David McCormick had never thought about running for elected office. Then he saw the Biden administration’s chaotic — and deadly — withdrawal from Afghanistan last year and decided he had to do something.

“Seeing Afghanistan play out just grabbed our attention and just shook us,” said McCormick, who is married to Trump administration national security advisor Dina Powell. “My wife has done a lot of public service, too. She’s an immigrant to this country. We both lived the American Dream. And when we saw that playing out — the humiliation, the embarrassment, and the lack of accountability — it just shook me. 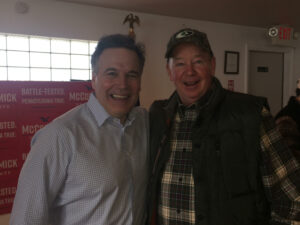 McCormick told a group of about 50 at the VFW post in Bensalem on Saturday there are many reasons Washington, D.C. needs to change.

“There are so many aspects of the country that feel like it’s headed in the wrong direction. We have 40-year high inflation, which is the result of these socialist economic policies. And that hurts all of us, but it really hurts working families all across Pennsylvania.”

McCormick, who served as undersecretary of the Treasury for international affairs under President George W. Bush, grew up on a family farm in Bloomsburg. His dad was chancellor at Bloomsburg University and chancellor for the Pennsylvania State System of Higher Education.

McCormick graduated from West Point and spent five years in the Army, where he served in the first Gulf War. He recently stepped down from his position as CEO of the hedge fund behemoth Bridgewater Associates.

McCormick has come under fire for his hedge fund’s investments in China, including an attack ad from a Dr. Mehmet Oz SuperPAC. But he noted that only 2 percent of Bridgewater’s investments were in China.

“China is the existential challenge of our time,” said McCormick. “It poses an economic risk. It poses a national security risk. We need a whole nation strategy to deal with it. And we need to reduce our dependence on China.”

Pharmaceuticals come from China and most semiconductors are made in nearby Taiwan. The United States’ investment and trade must not support the Chinese military or the oppression of its minority Uighurs, he said.

“The risk has grown in the last 10 years under (Chinese President) Xi,” he said. “Do you really want your drugs dependent on whether China is having a good day?

Meanwhile, America needs more skilled workers and must find a way for businesses to get capital to compete with Chinese businesses that are subsidized by the state.  More emphasis on technical training would help, he said.

“As military veteran…somebody who’s run businesses, created jobs, someone who’s served at the highest levels of government negotiating with China…That’s the kind of person you need to be able to go and fight in Washington.”

And “the border situation is completely unsustainable,” said McCormick, who recently visited Yuma, Ariz., to see the situation first-hand. A year ago, there were 30 illegal border crossers caught every day at Yuma, he said. Now there are 1,000. The Border Patrol agents’ union has endorsed him.

“The border guards are completely overwhelmed,” he said. “Literally, people are just walking through.”

Deaths from fentanyl brought across the border are increasing, and so are related crimes.

“You all feel it here in Philadelphia and moving into the suburbs,” said McCormick.

On education, McCormick said, “I don’t recognize the history that’s being taught to our kids today, with parents not having adequate involvement. And I don’t recognize the cancel culture where you can’t have the right conversations and disagree. It’s a disaster…The American Dream we lived is not going to be available to our kids five years from now or 10 years from now.”

An audience member asked McCormick about the crisis with Ukraine and Russia.

“The world is more dangerous now than it’s ever been,” said McCormick. “I think Biden invited that with Afghanistan. If you show weakness the bullies will take advantage of it. And that’s what happening with Russia. That’s what I think is happening in China. So we need to project strength. And our military today, I’m worried about it.”

While the U.S. spends $80 billion on defense, “there’s a whole social agenda, ‘wokeness’ that’s taken over our military (instead of its) warfighting focus.”

And China is spending its military budget on next-generation technology while the U.S. is spending “90 percent on old platforms” instead of innovation for the future.

“Ukraine is a terrible mess,” he said, and he would “look hard” at sanctions against Russia if it crosses into Ukraine.

“I don’t think we want to be part of a land war in Ukraine. And if we get too focused on that, we have to look over our shoulder, because I think China will move on Taiwan. If we go into something militarily, it has to be so decisive and conclusive it has to be beyond doubt.” 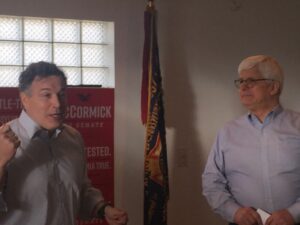 “Russian gas, which is much worse environmentally, is being shipped to Europe and the rest of the world so the greenhouse gases go up, our economic benefit goes down and our security in the world goes down because now we’re dependent on outside energy. It’s a madness that is taking place,” he said.

State Sen. Robert “Tommy” Tomlinson (R-Bucks) said McCormick is “truly a proud American, truly somebody capable of moving this country forward, truly somebody who believes in this country. I’m happy that we’ve got a candidate that I could feel that good about.”

And many in the crowd seemed to agree, leaving with McCormick yard signs and hats.