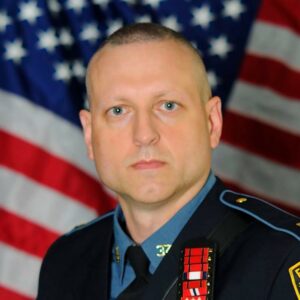 Falls Township Police Chief Nelson Whitney dropped a bomb days after being placed on paid administrative leave. Not only is he being investigated by the township for performance-related allegations–but his attorney says Whitney is also a witness in a federal probe.

The move followed a no-confidence vote from the local police union, citing an “absolutely toxic” work environment and “non-existent morale,” according to media reports. In Whitney’s absence, Lt. Henry Ward is now in charge of the 53-person department.

Township officials confirmed the suspension but refused to provide Whitney’s salary and declined further comment on the personnel matter.

In a statement released later by his lawyer, Whitney claimed he was served with a federal grand jury subpoena.

Attorney Scott Pollins said authorities sought his client’s cooperation in an ongoing probe, but he did not specify the nature of the investigation.

The top cop hinted that he feared his cooperation was linked to the Police Association of Falls Township’s (PAFT) no-confidence vote.

“Chief Whitney has retained legal counsel to investigate whether the chief’s cooperation in a federal investigation has any connection to the recent no-confidence vote by PAFT or him being placed on administrative leave by Falls Township,” Pollins wrote.

Pollins did not respond to a phone call from Delaware Valley Journal seeking additional comment.

A 33-year department veteran, Whitney became the acting township police chief in late 2020 following Chief William Cox’s retirement. He was appointed to the position permanently at the start of last year.

His attorney claims Whitney “sought to make cultural changes and implement efficient business practices” in the department that may have ruffled feathers.

Union leaders paint a much bleaker picture of the police force under Whitney, which resulted in 40 of 48 members favoring the no-confidence measure.

In a letter obtained by LevittownNow, Union President Edward Elmore cited problems solving grievances and Whitney’s apparent “contempt” for rank-and-file officers, including some who were so “disillusioned with the workplace” that they left for another department not long into tenures with Falls Township Police.

“One of the most repugnant aspects was when the chief offered Wawa gift cards to any officer who could beat his ‘high score’ with tickets within a given month,” Elmore wrote. “This practice has also created an enormous financial liability for the township’s citizens. By statute, all such citations are null and void; each may be required to be refunded. This liability increases with each passing day that this practice is not ended.”

The Bucks County Courier Times reported at least five former and current Falls Township police officers filed suits against the township and police over allegations that they faced harassment, discrimination, and retaliation.

An arbitrator earlier this year ordered fired officer Stephanie Metterle to be reinstated after she was accused of lying in a 2019 Pennsylvania Human Relations Commission complaint about serving on the township’s Major Incident Response Team, the outlet reported.