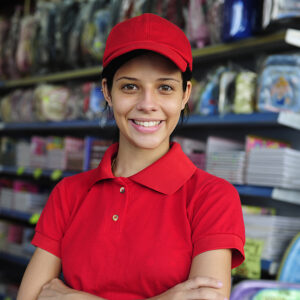 Summer Jobs Are Back, and DelVal Teens Are on the Hunt

With temperatures rising, longer days, and COVID restrictions slowly being rolled back, teen summer jobs have returned just when many businesses are looking to hire. While the Philadelphia area may have some of the lowest summer positions available in the U.S. this year, that’s not deterring teens from their searching for them, nor businesses from hiring them.

The traditional teen summer job routine was upended last year due to the pandemic. In April and May 2020, when teenagers traditionally begin looking for work, many businesses had no clue if they would reopen.

“We hired six people last year,” said Casey Buchanan, manager and part-owner of Handel’s Berwyn. That’s significantly lower than typical years, and it was a huge hit for teens as they make up most of his workforce.

Karen Pernaci, owner of Pop’s Water Ice in Havertown, said last year she “didn’t get many applicants at all.” She believes part of that was because “parents didn’t want the kids out in that environment,” working and being exposed to more people.

But teens are looking for work in greater numbers this year. In fact, teenagers are gaining jobs at the fastest rate of any age group. Buchanan said this year he’s had to tell people, “We’re no longer accepting applications because we have a larger roster than we’ve ever had.”

Taylor Smith, a teenager who lives in Montgomery County, currently has one job but is looking for another.

“I am mostly looking at restaurants, as they are always hiring the most it and also pay well,” she said.

Another Montco teenager, Aiko Palaypayon, is looking at a diverse field from grocery stores to cafés. Many teens are beginning the search for work at this time, but not every business is experiencing the same surge in applications like Buchanan’s.

Todd Serpico, a teacher at Radnor Elementary School and co-owner and co-founder of Beach Caddy LLC down the Jersey shore, said applications are lower compared to last year.

“I just think teens don’t know what to expect this summer,” he said. Despite this, Serpico says they only have “a couple more positions to fill.” However, he does expect throughout the summer demand will increase, leading them to “look to supplement our staff with new hires to meet the demand.”

While many businesses are hiring, success for Smith and Palaypayon isn’t easy to come by. “I haven’t had luck with [one location] because of age requirements,” said Palaypayon. Two other locations she applied to haven’t responded yet. Smith said there’s a little bit of confusion sometimes about who’s hiring and who isn’t.

“When you walk up to stores it’s an entirely different thing, they advertise in their store that they are hiring, but online they don’t.” They feel that most places are hiring, but they’re not being totally clear. There’s also much competition as teens apply en masse to similar businesses. And many times businesses that hire seasonal teens have workers that come back year after year, decreasing the number of positions available.

“I have teens that come when they’re 16 and they’ll come back through college in the summer,” said Pernaci. Despite low case counts, COVID continues to hover over the summer.

Serpico said his company learned last year it’s always good to have “reserve” staff, who can be “ready to step up and fill in,” especially if someone had been exposed to the virus and needed to quarantine. That practice may continue this summer, he said. Many people have been reluctant to return to work due to COVID-exposure concerns, but that’s not a major issue for the two teens.

“I was fully vaccinated recently and I believe the vaccine will keep me safe… I still plan on wearing a mask even if my workplace says I don’t have to,” said Palaypayon.

“I’m not really concerned,” said Smith. “Where I work, we still ask people to wear a mask and we also have plastic barriers protecting us.” Teens have different considerations when choosing where they apply, and Buchanan believes what makes Handel’s appealing is its flexibility and staple position in the community.

“Kids grow up coming here. They see teenagers who work here and know that’s an opportunity,” he said. “Shifts aren’t incredibly long, most are three to four hours.”

“You have to be very flexible,” said Pernaci, describing a characteristic both she and employees should possess. That means workers being able to work different times of the week, and Pernaci trying to craft their schedules to fit around extracurricular activities like sports.

For Serpico, he thinks it’s the work environment that motivates teens to apply for jobs at his business. “We get to work with people on the beach or near the beach, so it’s just a fun environment to be around.” Cash tips don’t hurt either. “They love cash tips,” he adds. But cash isn’t factoring into either of the Montco teens’ searches.

“I’m just trying to get anything I can at this point,” said Palaypayon. “Money is money.”