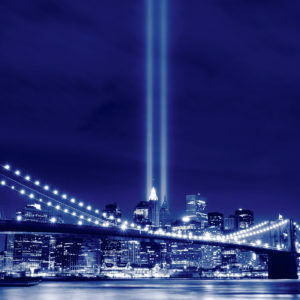 Brooklyn Brigde and the Towers of Lights at Night
[IS] Opinions

STEIN: Lesson From 9/11 To Seize the Day

On Sept. 11, 2001, I drove my red sports car north on Route 1 to Trenton, N.J. from the leafy Montgomery County suburb where I still make my home. The sky was a very beautiful blue with no clouds and I was looking forward to covering an ongoing trial.

I arrived at the courthouse a bit early. In the tiny press room I shared with a rival reporter, I perused my copy of The Times of Trenton, the newspaper I worked for then, checked my emails, then went into one of the judge’s offices to schmooze with his secretary while finishing my coffee.

One of the court stenographers ran in and told us to turn on the television, saying a plane had just hit the World Trade Center. We watched in disbelief as a second plane hit the other tower. Like most people, I was shocked, horrified. and afraid our country was under attack.

The news that a third plane struck the Pentagon hit too close to home. My daughter had just gotten her first job after college and worked for a defense contractor in D.C.  I was immediately worried she could have been in the building.

Throughout the day, I called her cell phone and her office number but the lines were busy. My instinct was to go home to my teenage son. But, I told myself, I was a professional journalist and had a job to do — although it was hard to concentrate with history happening before my eyes. The fear and uncertainty of what might be next felt overwhelming. News developments later in the day, that a plane had crashed in rural Pennsylvania and that all air traffic was halted, reinforced my feeling of dread.

I also had the opposite thought– that I should head up to New York and help cover the situation for our newspaper. But when I suggested that to my editor, Vikki Monaghan, she said to stick with the trial, that local news was needed, too.

And oddly, the trial went on. It was what the former Montgomery County District Attorney Michael Marino called a “Mom and Pop job” where a husband was accused of attacking his then-wife.

The defendant had disguised himself as a masked robber and stabbed the woman in a beauty shop as she was getting her hair done. Defense lawyer Scott Krasny called psychiatrists to testify that his client was in a psychotic state at the time of the crime.

Although former Superior Court Judge Ira Kreizman gave the jury the option of going home, the jurors opted to hear the closing arguments instead. Later, the jury was unable to reach a verdict and the case had to be retried.

Late in the afternoon, I finally reached my daughter and she was fine. In fact my husband, my son, my whole family were fine.

But the families, ordinary American families like mine, of nearly 3,000 others—people who jumped from skyscrapers rather than burn to death, office workers who were crushed under the weight of a falling building, the firefighters and police officers who had rushed in to try to save them, losing their lives in the process, were destroyed by Islamist terrorists.

Years of covering random accidents, trials where the details and often pictures of gruesome assaults were shown, murders, and random mayhem did not prepare me for Sept 11, 2001. The main lesson is life can be short, end suddenly, unexpectedly, unfairly and you should live, really live, every day. The phrase, carpe diem, or seize the day, took on a new and vivid meaning.

And, as for the country, our collective sense of well-being and safety was also lost that day. Now, 20 years later, it’s still hard to make sense of what happened that clear September morning, a day where everyone remembers where they were when they heard the news that airplanes struck the Twin Towers.