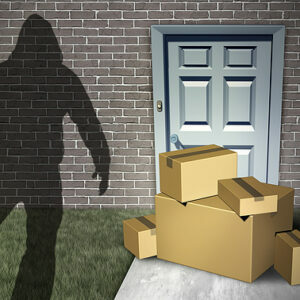 America’s crime wave is coming to your front door if it has not hit there already.

Porch piracy — the theft of brand-new, unopened items in packages lying just outside the sanctuary of your home’s living space — is a hot trend. Especially coveted items include large-screen televisions, cell phones and anything from high-end retailers. But even the loss of items such as baby formula, prescription medicines and medical devices can be highly disruptive.

Ben Stickle at Middle Tennessee State University, one of the country’s top experts on porch piracy, found in a thorough pre-pandemic study that 24 percent of 562 respondents surveyed in 49 states had been a victim of porch piracy. The pandemic drove a significant increase in package deliveries and, consequently, in thefts.

A late 2021 survey by SafeWise, a home security publication, put the figure at 64 percent, with 53.5 percent having multiple packages stolen. The hardest hit cities in 2021, according to SafeWise: Denver, San Francisco, Salt Lake City, Seattle and San Antonio.

Despite the audacity of someone doing a near-home break-in to steal a package, statistics on porch thefts are likely underreported for several reasons. Retailers often do not want to upset a customer who suffered a theft and often just agree to replace the item. Customers who suspect thefts may also hold off on making police reports because of the time involved, especially if the item is insured or replaced.

It is time to get tough on thieves who commit these crimes in broad daylight. Even door cameras are not a deterrent as perpetrators can easily cover their faces with a hoodie, baseball cap or other clothing.

Like many other crimes, the poor and the middle class are most affected by porch piracy. The well-off have homes farther from the road, where crimes are less likely to occur, and they can afford devices and services where packages can be safely stored. The poor and middle class must worry about nefarious actors taking hard-earned, valuable items.

And we all should be concerned about porch pirates becoming emboldened and moving to bigger crimes.

It is imperative to send a message that porch piracy is unacceptable and not worth the risks to those contemplating it.

Prosecutors should have the flexibility to treat porch piracy as a felony. Yet federal law applies only to thefts from the U.S. Postal Service, which delivers 32 percent of the country’s packages.

States are already taking action. In January, New Jersey Gov. Phil Murphy signed the Defense Against Porch Pirates Act, which allows prosecutors to seek fines up to $15,000 and/or three to five years of imprisonment. Kentucky Gov. Andy Beshear signed legislation in June that toughens penalties as well. Texas and Georgia did so earlier.

Congressman Dean Phillips of Minnesota has introduced the Porch Pirates Act in the House of Representatives. It would treat the theft of packages from private carriers the same as the theft of packages from the Postal Service while ensuring prosecutorial discretion. The measure, introduced in May, already has a bipartisan group of 70 co-sponsors, 48 of them Democrats.

The congressman is spot-on in his call for swift action to deter these escalating crimes.

“Porch piracy is an increasingly dangerous crime as more Americans, especially our seniors, rely on delivery services for vital necessities such as medicines and groceries. American consumers lose hundreds, if not thousands, of dollars as victims of this crime,” Phillips said.

Strengthening penalties against porch piracy, as would happen under Phillips’ legislation, is an overdue, common-sense action necessary to protect American homes. It merits bipartisan support, as it has already received in many states.

Paul Steidler is a senior fellow with the Lexington Institute, a public policy think tank in Arlington, Virginia