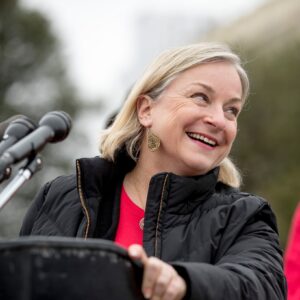 In Washington, D.C. Republicans only need five more seats to win control of the House. And they could pick up two of them in southeast Pennsylvania, strategists say.

At the same time, perennial Democratic hopes of taking out GOP Rep. Brian Fitzpatrick in the Biden-friendly First Congressional District have largely faded.

According to the data analysis website FiveThirtyEight, redistricting made Wild’s district more difficult to hold. Picking up Berks County was not ideal for Rep. Wild, nor was losing Stroudsburg—a borough in Monroe County that is a Democratic stronghold, said Charlie O’Neill, grassroots programs coordinator for the Leadership Institute.

Wild’s district is now considered one of the state’s three competitive congressional races, including races for an open seat in Beaver County and incumbent Rep. Brian Fitzpatrick (R-Bucks), according to FiveThirtyEight.

Federal Election Commission filings show Ehasz has $77,976 on hand, while incumbent Fitzpatrick has close to $1.4 million.

Wild may have twice the amount of cash as her Republican challenger Lisa Scheller, but veteran Democrat strategist TJ Rooney said this will be a difficult election cycle for the incumbent.

“Folks who have been elected in the last four or six years had nothing but favorable conditions to run as a Democrat,” Rooney said. “This time, the president has a very low approval rating and Americans, by and large, think the nation is heading in the wrong direction.”

The Democratic Congressional Campaign Committee (DCCC) has both Houlahan and Wild in their “Frontline” program, a sign they believe the seats are at risk. Houlahan apparently believes it, too. Last week she hosted her 60th town hall meeting.

“Of all of the more recently elected members from Pennsylvania, she’s the head of the class,” Rooney said. “She’s done the things at home that will enable her to win this year.”

O’Neill isn’t so sure. Houlahan’s challenger, former Chester County Chamber of Commerce president Guy Ciarrocchi won a tough, competitive primary and is an experienced political player. And his background in the business community gives him credibility on the economic issues dominating this election cycle.

Both Houlahan and Wild voted with Biden 100 percent of the time, FiveThirtyEight reports, not a positive when the president’s approval is around 40 percent in most polls.

“It’s going to be hard for Wild to talk about the pocketbook and kitchen table issues when her president is largely responsible for inflation, O’Neill said.

Wild’s opponent, Scheller, serves as president and chairman of her family’s manufacturing company. She ran against Wild in 2020 and lost by 4 points.

“In 2020, Donald Trump won Carbon County with 65 percent of the vote as opposed to his 44 percent in Monroe County, which is now almost entirely eliminated from the new district,” Bullock said. “If Scheller mirrored Trump’s 2020 performance in Carbon County, she would have defeated Wild in 2020 due to her performance in Northampton and Lehigh Counties.”

Wild also faces a $50,000 ad campaign organized by the Pennsylvania Hispanic Republican Coalition of Pennsylvania targeting Hispanic voters in her district. It is the first Spanish-language advertising from the right in Pennsylvania, according to Chris Mundiath, the group’s chairman.

“We are investing in reaching the Latino community in areas like the Lehigh Valley and Hazleton where we can really make a difference,” Mundiath said. “Democrats will no longer have a stranglehold over our demographic in our commonwealth. We are ready to lead the movement.”

Lehigh County has the state’s largest Hispanic population at 26 percent, according to the Pennsylvania State Data Center. Wild won the county by a 6-point margin.

Back in Chester County, Ciarrocchi laid out a mantra voters are likely to hear again and again between now and November.

“This election is a referendum. If you like $5 gas, paying up to 40 percent more for groceries, rising crime rates, unsecured borders, our children being used as political pawns, and Russia and China growing in power, vote for Congresswoman Houlahan. She supported every single policy that brought us to this dangerous place.”