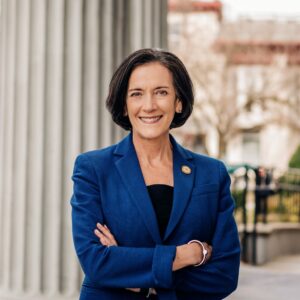 Arkoosh, a Democrat who ran for the U.S. Senate last year, was first appointed a commissioner to fill a vacancy in 2015. She also made an unsuccessful bid for Congress in 2013.

Arkoosh said she was “extremely honored to accept the nomination.”

“As a physician and public health advocate, I spent my career fighting for health care access and affordability for families, and I am deeply honored to be able to continue this fight alongside my friend, Gov.-elect Josh Shapiro,” said Arkoosh. “Working together as Montgomery County commissioners, I saw Gov.-elect Shapiro’s commitment to enhancing the health and well-being of his constituents firsthand. I look forward to advancing the governor-elect’s agenda to ensure vulnerable populations across the commonwealth have the support they need and every Pennsylvanian has equitable, affordable access to health care in their community.”

She added, “I thank Gov.-elect Shapiro for his support and trust in me to continue my track record of delivering equitable, efficient, and data-driven programs and services to the people of Pennsylvania.”

“DHS provides services to care and support Pennsylvania’s most vulnerable individuals and families. As secretary, I will continue the department’s critical work to help Pennsylvanians lead safe, healthy, and productive lives through trauma-informed services. As a physician of more than two decades in Philadelphia teaching hospitals, an advocate for the Affordable Care Act, and the head of Pennsylvania’s third-largest county for nearly eight years, I am fully prepared to lead the commonwealth’s largest government agency.”

“My experience as both a physician and public health professional continues to inform my work. It was front and center as I shepherded Montgomery County’s efforts to combat the COVID-19 pandemic through a data and science-driven response, focusing on clear communication and transparency,” said Arkoosh.

Arkoosh leaves behind a big pay hike in commissioners’ salaries she helped push through late last year. In December, Arkoosh and Democrat Commissioner Kenneth Lawrence voted to increase county taxes by 8 percent while giving raises to themselves and other county row officers.

Arkoosh’s handling of COVID wasn’t universally popular. Minority Republican Commissioner Joe Gale called her a hypocrite for criticizing him over handing out flags to put on veteran’s graves at a Conshohocken cemetery before Memorial Day in 2020. He accused her of “mask shaming.”

“You don’t need a mask to put American flags at a cemetery outdoors,” he said. “What you just said was ridiculous…I have been very clear. People should use their own judgment.”

Parent activist Megan Brock tweeted about the Arkoosh nomination, “I think there are few people in the country who worked harder to keep schools closed than Val Arkoosh. She demoralized parents and students. And now she’s going to be the secretary of human services. Many of us predicted this would happen.  Democrats fail up.”

Arkoosh has voted for five tax increases during her eight years as county commissioner. When she was appointed in 2015, the county millage rate was 3.152. It is now 4.627 (including the .39 millage rate for the community college, which was added under her leadership). Taxes have increased 46.8 percent since she took office.

Shapiro and Arkoosh voted to raise Montgomery County property taxes in 2015 and 2016 by 21 percent.

The court wasted no time in announcing the vacancy.

Candidates will be expected to be available for interviews at a time to be designated by the court.”