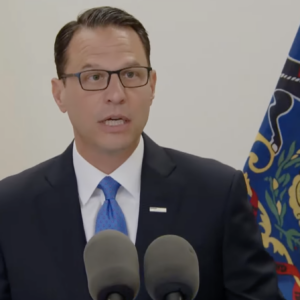 Specifically, Shapiro says he would cut the cellphone tax, send $250 gas tax rebates to car owners, and expand the property tax and rent rebate program. Both Shapiro and his Republican opponent, state Sen. Doug Mastriano, agree the state’s corporate taxes  — the second highest in the country — should be reduced to attract businesses and jobs.

But Shapiro had a record of raising taxes when he served as a Montgomery County commissioner, despite promising voters during the campaign that he would not.

Shapiro voted to raise Montgomery County property taxes in 2015 and 2016 by a total of 21 percent. In 2015, Shapiro had just been re-elected as commissioner and in 2016, he had been elected as attorney general and was leaving his county post when he voted to again raise taxes.

Before being elected county commissioner, Shapiro pledged not to raise taxes.

“Josh Shapiro campaigned for county commissioner on a no-tax pledge, yet within weeks of being re-elected commissioner, Shapiro voted to increase taxes by 10 percent,” Gale said at the time. “Just a few weeks after being elected to his new position (attorney general), he’s increased taxes by 11 percent.”

Gale said, “There’s a pattern here. You elect Josh Shapiro on a Tuesday and the next week you’re hit with a double-digit tax increase…A 21 percent tax increase over the course of two years is outrageous.”

Skippack resident Mike Marino, a former Montgomery County Commissioners chair, said Shapiro “imposed an assessment as a contribution to Montgomery County Community College. It appears on my county bill of over $100 each year. It was a sneaking way of raising your taxes without calling it a tax. He is a typical Democrat that constantly raises taxes and then states that he does not. Just another attempt to deceive the public. Exactly the same tricks as Joe Biden.”

For his part, Shapiro tweeted on June 22, “As county commissioner, I inherited a deficit – so I got to work. I balanced our budget, and by the end of my term, Montgomery County was back on track to financial stability. Experience matters.”

Shapiro’s campaign did not respond to a request for comment about Shapiro’s record on taxes.

Gale, who had also run for governor but lost to Mastriano in a crowded Republican primary, added, “Josh Shapiro is, and has always been, a tax and spend liberal who has never seen a money grab he didn’t like. Once elected governor, he will grow the size of government and the already bloated state budget.”