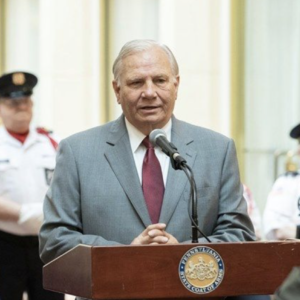 With one of the most tumultuous years in a century coming to a close, we asked two Delaware Valley area lawmakers to reflect on 2020, and also to take a look forward at what’s in store with a new legislative session right around the corner.

This conversation is with Republican Sen. Bob Mensch, whose 24th Senate District includes parts of Berks, Bucks and Montgomery Counties.

For a look at the Democrat side of the aisle, please see our interview with Sen. Katie Muth.

Unbeknownst to Delaware Valley Journal at the time of the interview, Mensch’s wife had just passed away on Christmas Day. We express our most heartfelt condolences at his loss, and that of his family.

These interviews have been edited for clarity and brevity.

DVJ: What accomplishment are you most proud of in 2020, whether for yourself or for the Republican caucus, or for the General Assembly as a whole?

Sen. Mensch: I’m going to take credit for my own legislation on, um, working on breast cancer — a series of three bills that I want to do. It takes some time to navigate these [stakeholders] — the Legislature, the medical community and the insurance industry — but we, we have now expanded insurance coverage for detection of breast cancer.

My first bill was, was dealing with a greater system that would sooner diagnose breast cancer, and opening it up for [detection through] MRI and for other more sophisticated technologies. This [next] bill builds on that and, and we have one more where we want to tie together some additional insurance.

My wife was a cancer survivor for many years. She passed recently from it. But breast cancer, when you have witnessed it, or, you know someone that has endured it, it is a devastating disease. And it’s one that if we are a little bit more proactive in some of the things that we do toward the treatment of breast cancer, we can, we can save many more women’s lives, or many more people’s lives because men can contract it as well. So that’s, that’s why it’s extremely important to me. I took a very personal attitude toward improving it when I learned that my wife contracted it. I started to work [on the issue] before I knew that she had breast cancer.

DVJ: Biggest disappointment or maybe a missed opportunity of 2020?

BM: I think the biggest lost opportunity was when the pandemic was so politicized and we began to divide camps, political camps strictly for supporting a governor or fighting with the governor, as opposed to coming together and doing what was right for the people of Pennsylvania. We missed so many opportunities to improve services to mitigate or minimize the impact of the virus on the economy. It made everything way too political, made it impossible to work together. And I think that it will have a lasting effect that when — when you begin to call, when one party calls another party “killers,” when, when they do fundraising efforts around the notion that Bob Mensch is killing people, because he wants to do what is right to move the economy forward and then continue to support the people of Pennsylvania — that will have a lasting effect, and that, that will not go away soon.

And so, I’m afraid that the opportunity that was lost was to help the people. But so too was we have destroyed a working relationship in the Senate between the two parties. And it’ll be some sometime before that is fixed.

BM: To get people back to work, to get the economy back to work. I understand that many citizens believe they’re being hunkered down and doing nothing is the safest thing they can do. For some people’s lives, I believe that’s true. But as a government, we need to be able to provide services essential to defeating the virus, being able to put people back to work, being able to provide all of the other human services that we do — highway services and so on and so forth. We can’t do that if we don’t have revenues — you know, we’re just like every other business and the money’s not coming in the door, we can’t provide the activities that we need to. The only alternative we have is, well — we have two alternatives: we can cut spending, uh, or we can increase revenues through taxes. 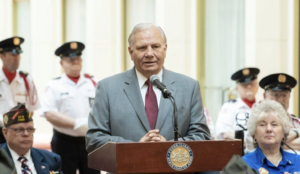 This is certainly not the right time to be increasing taxes because too many people are out of work. People can’t support it. I’m afraid of the political backlash that would occur — and rightly so — people will be very angry. So, this will have an impact on the services that we provide.

They are curtailed because we don’t have sufficient revenues. And if people think that it goes away in 2021, uh, it’s not going to. We have a $5 billion legacy issue now in the economy in the spending stream for the state that won’t go away anytime soon. And as long as we are working with depressed revenues, we’re going to struggle mightily to be able to provide adequately all of the services that we need to.

DVJ: What’s the goal that is within reach, but will take a lot of tough work to pull it off?

BM: When you think of government, you think of a couple of things: infrastructure, education and human services. It will be an extraordinary effort to be able to adequately support all three of those areas of government interest. We’re not going to be able to pull that off. The highways, you know, recently we’ve learned that PennDOT was running short of money and didn’t tell us. But now they’re going to be in the debt market trying to find sufficient monies. What are we going to do with human services longer term when we have people, very needy people?

You know, one of the things that we protected in, in the budget was food security, but that’s going to become more and more fragile in coming years because of insufficient revenues.

What are we going to do with education? How are we going to get kids back into the classrooms so that learning begins again? We were seeing that in the wholesale fashion that we’re approaching it, that distance learning is not working, not, not adequately.

And while we’re, we’re doing some teaching — and God bless the teachers that are trying to do it, but — we’re not at the same level of, of efficiency of concentration that we would be if we had people in the classroom.

Those three will keep me — and I think most of the legislature — awake trying to figure out how to do it.

There are a lot of other pet things that each of us as a legislator would probably want to do, but those issues will climb to the top very quickly. And I think we’ll remain there for some time.

DVJ: Biggest change or any changes you expect to see in Harrisburg next year because there is a change at the White House?

BM: I’m starting my 15th year [in Harrisburg], so I’ve been there through Democrat and Republican administrations. And I’ll be honest with you. There’s not a significant change between [presidential administrations].

Maybe because of the pandemic, we’re going to see a little bit more money coming. That’s the only thing that I can imagine, but I think that, that the Republican administration that’s there now did a yeoman’s job in providing revenues. Some hardcore fiscal people on the right say that Trump went way too far. I’m not sure how much further bird Biden can go. Um, because it does stress the American economic fabric sooner or later. And so I, I just don’t, I don’t expect that big of a change.