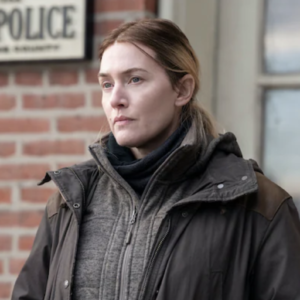 REVIEW: In the ‘Mare of Easttown,’ Details Matter

That’s what I thought while watching the first installment of HBO’s new limited series “Mare of Easttown.”

Set in the fictional Delaware County town mentioned in the title –which actually does exist, although the actual Easttown is in Chester County and way more upscale, the home of the tony Devon Horse Show– the producers made every effort to bring the real flavor of a Delco borough to the small screen.  And they did a magnificent job in setting the stage.

From the indigenous, and entirely unique accents to the authentically gritty streets of southeastern Delco, to the casual references to hoagies and cheesesteaks, the sports team magnets on refrigerators, and the way that Kate Winslet, the Mare of the title, nailed the pronunciation of “home” (mangling the o so it became something like “howmm,”) people from my part of the world would recognize themselves on the screen.

That’s what elevated this very good crime drama into a potentially great one. I say potentially, because we’re only at the first episode and while the plot is interesting enough, it remains to be seen whether the writers can engage an audience that doesn’t know “Wawa” from “Walmart.”

In a nutshell, the story: Winslett plays a small-town police detective who, when the episode opens, is saddled with the unsolved mystery of a young girl’s disappearance. The fact that the girl happens to be the daughter of Mare’s former high school friend and basketball teammate, Dawn, complicates the situation, since Dawn is actively critical of the Easttown police department’s failure to locate her missing child. Mare takes the criticism personally, something which becomes obvious in a heated confrontation between the two women later in the episode.

And the drama is not limited to the past. Early on in the pilot, we are introduced to a young woman named Erin McMenamin, heartbreakingly sweet, lovely and innocent.  The innocence is only underscored by the fact that she is a teen mother, and the biological father of the baby is a long haired, callous-to-the-point-of- cruel youth who comes to pick up his baby son for visitation with his current girlfriend, a rough number named Brianna, perched in the front seat of his truck. The jealousy displayed by that young woman toward her lover’s baby mama is visceral and foreboding. You perceive early on that she will be a formidable threat.  Those of us who grew up in and around Delco and perhaps other locales, recognize the type, someone whose possessiveness of “her man” can cross the line into criminal acts. Erin finds herself in Brianna’s crosshairs, and the final moments of the episode establish a tragic plotline that will parallel the one involving Dawn’s missing daughter.

There is a lot more going on in this premiere, including Mare’s contentious relationship with her mother, a magnificent Jean Smart who has become one of Hollywood’s most talented and reliable character actresses. She slips effortlessly into the role of a Delco woman who, not yet out of her sixties, is already a great-grandmother.

Mare also has an encounter with a newcomer to town, an attractive man who picks her up at a local bar. His approach is almost genteel, if a bar pick up can be called that, and his comment that Mare is “beautiful” is both believable and also poignant. Winslet, albeit a beautiful woman, has allowed herself to be presented as an overweight, frayed-around-the-edges matron whose hopes are as faded as her roots.  The chemistry between the two promises to be one of the highlights of the series, an opportunity to humanize a woman who has seen, and lived through, much more than her years would suggest.

Like “The Sopranos,” also an HBO series, “Mare of Easttown” is a strange hybrid.  It is a family drama, a crime drama, a social commentary and a psychological exposition. It also touches on the greatest plague in Delco, and many other depressed regions in the rust belt: the opioid crisis. We will see the toll that narcotics have taken on the young people of Easttown, and the first episode foreshadows the very personal impact it has likely had on Mare. In one of the final scenes, Mare lies in bed cradling her 4-year-old grandson and looks up to see the image of her son, the boy’s father.

Just as she recognizes his face, it vanishes.  That may be a metaphor for his life, and her own.

“Mare of Easttown” is a deeply moving commentary on life in a small town on the outskirts of a large metropolitan area. The fact that it’s our small town, in our part of the world, makes it irresistible, must-watch television.