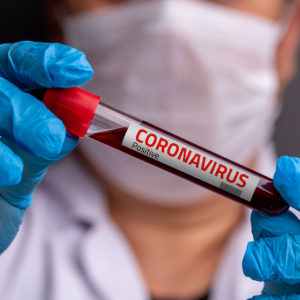 A new study published by the data analysts of WalletHub.com ranks Pennsylvania as number 19 on the list of most aggressive states in taking measures to combat the spread of the coronavirus.

The study evaluated 51 different metrics, “from tested cases of COVID-19 per capita and state legislation on the pandemic” as well as examining affected industries and the uninsured population in the commonwealth.

This is Wallethub’s third such report since early March and Pennsylvania continues to move up the ranking from number 21 and number 29 among the 50 states and the District of Columbia.

The top three in the latest ranking are New York, the District of Columbia, and Alaska. The worst performers were Nebraska, South Dakota, and Oklahoma.

This report comes as the state has made national news for controversy around some of its aggressive actions, including state police ticketing a 19-year-old driver for violating Gov. Wolf’s stay-at-home order and shutting down the state’s retail liquor stores.

Some lawmakers have expressed concern about economic upheaval after unemployment figures showed Pennsylvania behind only California in new unemployment claims filed as the virus continues to wreak havoc on the U.S. economy.

Republicans in the state House of Representatives are backing a bill designed to get more businesses back at work, such as residential and commercial construction. House Speaker Mike Turzai (R-Allegheny), the primary sponsor of House Bill 2400, said, “these stop work orders are devastating the households of thousands of Pennsylvania families when they could be earning a paycheck.”

As for the spread of the virus itself, a New York Times national tracking webpage put the state as the tenth highest in the nation for coronavirus infections on a per-capita basis, with 114 cases per 100,000 persons.

Gov. Tom Wolf on Tuesday tweeted pictures of himself and First Lady Frances Wolf donning face masks, “asking that all Pennsylvanians wear masks when they leave their homes to help prevent transmitting #COVID19.” 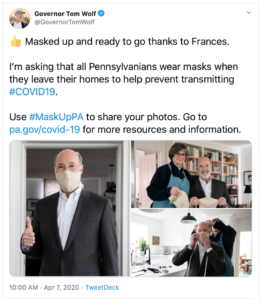 The governor’s website is also giving tips for making homemade cloth masks for public use.

“Because homemade masks protect everyone else from the droplets created by the wearer, it is important that as many people as possible wear these masks when leaving their homes,” the website says. “This helps prevent those who may be infectious but are only mildly symptomatic or not symptomatic from spreading the virus to others in the community.”

A forecasting model released by the Institute for Health Metrics and Evaluation, part of the University of Washington, estimates that cases in Pennsylvania will peak on April 11 — assuming “full social distancing” stays in place through May.

In a streamed news conference Monday, Gov. Wolf was asked about the planned lifting of the “stay at home” order set for the end of April.

“I’m not moving it [stay at home order] beyond April 30th, but that may happen,” while adding “the surge may not be as great as we once anticipated” thanks to reduction measures that are working.