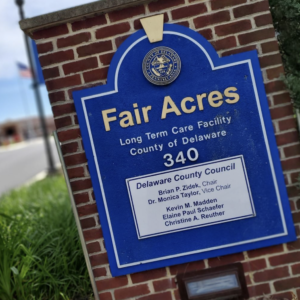 Report: Delco Nursing Home Has Highest Number of COVID-19 Deaths in the Nation

The Fair Acres long term care facility in Delaware County owns the dubious distinction of having more COVID-19 deaths of its residents than any other similar facility in the nation, according to an analysis from the New York Times.

Fair Acres is a government-owned facility run by Delaware County and has had 94 total deaths, according to the Times analysis.

The numbers only look at the raw number of deaths, however, and do not offer a comparison on a per-capita basis.

And the Times offered its own caveat on the breakdown.

“Some states, including Colorado, Illinois, Nevada, New Jersey and South Carolina, regularly release cumulative data on cases and deaths at specific facilities,” the report said. “New York regularly releases facility-level information about deaths, but not about cases. Ohio, Wisconsin and Minnesota, among others, provide some details on the number of cases at specific facilities — but not on deaths.”

The Delaware County Council has not provided a comment on the data. 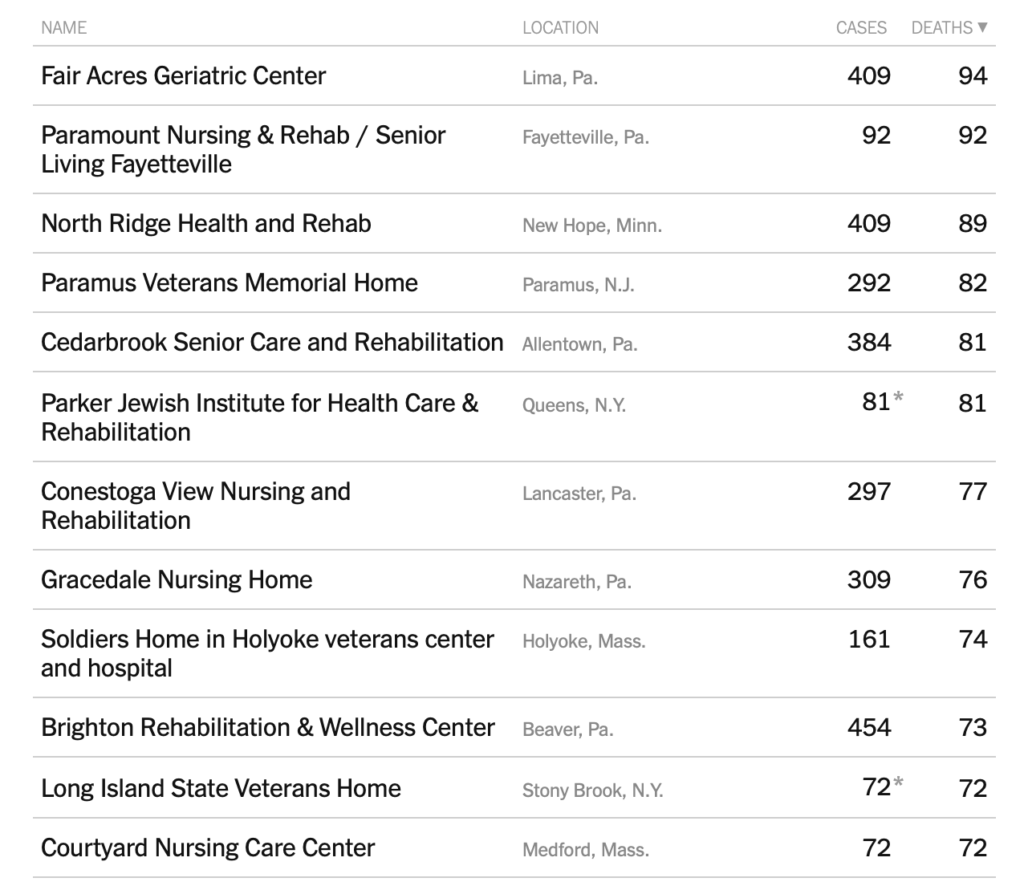 In May, Delaware Valley Journal inquired with the county about the high number of deaths at the facility.

“Fair Acres is high in both positive cases of residents and employees and deaths because it is an extremely large facility,” the county’s spokeswoman, Adrienne Marofsky replied at the time.

“It is the largest stand-alone skilled nursing facility in the County.  It has over 900 licensed beds and generally has between 575 and 750 of those beds occupied.  In most weeks, the total number of residents and staff members at the facility is approximately 1,500.  When you take into account the number of residents and employees at Fair Acres, the percentage of positive cases and the number of deaths is slightly below the average for nursing homes in the region.”

However, the current census shows just 445 beds out of 745 in use — still one of the largest facilities in the state, but putting the death toll into an even more troubling context.

The Pennsylvania Department of Health was under fire for the high rate of deaths in nursing home and other long-term care facilities (LTCFs) at the beginning of the pandemic, to the point that Democratic Senator Andy Dinniman (Chester County) shouted out during a May policy hearing, “The department of health has failed our nursing homes!”

Department of Health spokesman Nate Wardle linked the data to the latest round of restrictions put in place by Gov. Wolf last week.

“That is why the mitigation efforts put in place last week are so important. We need Pennsylvanians to take a pause, to stay home and to help prevent our health system from being overrun,” Wardle concluded.

Wardle provided a list of nine bullet points summarizing highlights of the Wolf administration’s reaction to the coronavirus crisis specifically as it relates to the response to LTCFs. He said the administration had prioritized “nursing homes and long-term care facilities to receive PPE, and for testing among symptomatic individuals,” and “providing personal protective equipment (PPE) regularly to facility operators, as well as education and training on how to safely put it on and take it off.”

Wardle’s response also said the Department of Health had provided support through regional programs, such as providing  “infection control contractor ECRI.” However, ECRI’s contributions were found to be vastly insufficient, according to those in the nursing home community.

“As of April 29, ECRI had consulted with 76 facilities, or about 15% of all long-term care facilities with cases reported to the state,” Spotlight PA reported in May. “Providers criticized that number as too low when hundreds of facilities are vying for support.

“If ECRI is the be-all, end-all of the state’s response at this point, why have they not been to every facility?” Zachary Shamberg, president and CEO of the Pennsylvania Health Care Association, said in the SpotlightPA report.

“Long-term care residents and staff have been disproportionately affected by COVID-19, despite the extraordinary effort of those on the front lines,” Shamberg told Delaware Valley Journal after seeing the Times statistics. “Even before the first case of COVID-19 was confirmed in long-term care in Pennsylvania, we knew the risks of failing to prioritize our most vulnerable, which is why we fought for personal protective equipment and testing supplies, as well as critical funding for staffing assistance. We continue to call on state and federal partners for collaboration and support, as well as vaccine prioritization, to ensure providers have access to critical resources to effectively mitigate the spread of COVID-19 in their facilities.”

Delaware Valley Journal reported that Montgomery County Chairwoman Dr. Valerie Arkoosh found ECRI’s response so lacking, the county decided to abandon any hope for help from the company, and instead set out to create its own nursing home response team.

Pennsylvania was one of a handful of states that directed nursing homes to readmit COVID-19 infected patients after being released from the hospital in the early months of the pandemic.