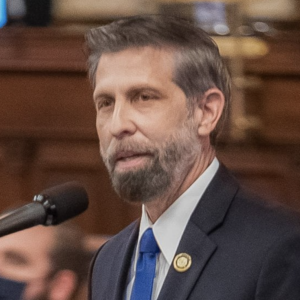 Even as the Delaware Valley reels in shock at the shooting on South Street in Philadelphia Saturday night that took three lives and injured 11 people, a bill is pending in the state legislature that could help stop the bloodshed.

State Rep. Craig Williams (R-Chadds Ford) spoke to the Delaware Valley Journal in a podcast about the bill he sponsored with Rep. Martina White (R-Philadelphia) that passed the House in April and awaits action in the Senate.

The bill, HB 2275 would extend Act 58, which gave the attorney general the authority to investigate and charge certain gun crimes in Philadelphia as part of a two-year pilot program that Gov. Tom Wolf signed into law in 2019.

Attorney General Josh Shapiro did not use that act before it expired in 2021. However, Shapiro, now the Democratic candidate for governor, worked with Williams on the new legislation. Williams added an amendment that would establish a gun violence task force in Philadelphia with some “serious teeth” built into it.

Act 58 gives the attorney general concurrent jurisdiction to prosecute gun crimes with the Philadelphia district attorney, according to Williams, a former federal prosecutor and a Marine prosecutor.

“It is both a federal and a state crime for a previously convicted felon to even possess a gun,” he said.  “The sentences for those crimes are extraordinary because they are based on their prior criminal history.”

“Act 58 would have given Josh Shapiro concurrent authority to prosecute criminals not to be in possession of a gun and also straw purchasers,” said Williams. “He did not use that authority and so it expired.”

Philadelphia District Attorney “Larry Krasner has said publically on a number of occasions that he believes a prior felon in possession of a gun is simply a possession case, which he is not inclined to prosecute,” said Williams. “You can still prosecute these cases in the United States Attorney’s Office.”

Arresting criminals carrying guns, prosecuting them, and putting them in jail is “proactive,” said Williams.

Philadelphia police said five different guns were used in the South Street melee. As of June 5, there were 218 homicides in Philadelphia, down from 227 last year.

When he was convicted of being a felon unlawfully possessing a gun, “We prevented him from doing major gun violence, at least while he’s in prison. And that’s why these measures are proactive. This is about taking the streets back.”

Senate Pro Tempore Jake Corman (R-Bellefonte) is in favor of the legislation.

“The streets of Philadelphia would be much safer if the district attorney enforced the laws on the books. Using these senseless shootings to advance any sort of partisan policy agenda does nothing to honor the memory of the lives lost and fosters deeper division at a time when we need unity,” Senate Majority Leader Kim Ward said. Her spokeswoman on Monday could not give Delaware Valley Journal a date when the bill will be taken up by the Senate.

Meanwhile, Philadelphia Mayor Jim Kenney said, “It’s gotten to the point where there’s no price to pay for carrying illegal guns, so people carry them because they don’t think anything is going to happen.”

For his part, Krasner blamed the National Rifle Association and legislators who take contributions from the gun lobby for the issue.

But the NRA fired back.

“Philadelphia has been awash in crime for years as a result of Krasner’s ineptitude and loyalty to his benefactor, George Soros, who supports weak DAs who pledge not to prosecute violent criminals and release them almost immediately as law enforcement arrests these violent felons,” the NRA said.