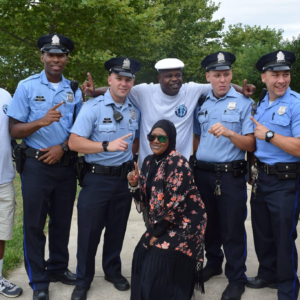 Race for Peace To Hold Event Saturday in King of Prussia

They say everyone should do their part to make the world better.

Alim Howell and his dad, Andrew Howell, are doing just that. The Delaware County father and son founded Race for Peace, an event that tries to improve relations between the police and the African American community. They started the nonprofit in 2016 and have held events to try to bridge the divide that exists and is perhaps even sharper these days.

“The goal of our organization is to have better relationships with the police,” said Alim Howell, 24, in an interview with Delaware Valley Journal. “The police are not here to purposely hurt us and harm us. They’re here to protect us. We’re not about negativity.”

But Howell admitted last year was a difficult time for his organization, with the death of George Floyd and the Black Lives Matters riots that followed, along with other deaths of Black people during interactions with police officers that have received widespread publicity.

Even with the pandemic, Race for Peace held its annual event at the King of Prussia Mall last July, said Howell. However, most young Black men walked right by their table, some making derogatory noises.

“That was an awkward vibe,” he said.

But many other people, including families, stopped by “so it was a positive event,” Howell said. And he’s hoping for a good turnout this year with the pandemic receding and businesses opening up again.

Howell hopes Race for Peace can help with learning and understanding on both sides, with the police and Black people. Officers should be trained in how to interact with people without using unnecessary violence and to not racially profile, he said. And people need to know that they should cooperate when stopped by an officer.

“The police are not here to get the Black people,” he said. “If someone breaks the law, you got to do the time, right?”

One good thing that happened Floyd’s death was a bill that bears his name that passed in the House in March and is pending in the Senate. It includes a wide range of rules requiring police to be more accountable for their actions, Howell said.

Howell hopes the group can change people’s attitudes toward the police through dialogues, whether in schools, churches, community centers, or at the mall on Saturday.

“It’s important to talk to kids, not just to talk to police, but to talk to kids to change people’s attitudes,” said Howell. He would like “youth to feel more comfortable with police,” which would go a long way toward creating an atmosphere of trust.

Radnor Police Superintendent Chris Flanagan said his department became involved with Race for Peace shortly after it was formed and supports its work of bringing police officers and community members together.

“It’s not a huge organization but its mission is big,” said Flanagan. He is looking forward to Saturday’s event at the mall because so many people from all walks of life and various ages come to malls so it’s a chance to interact with a wide group of people.

“Race for Peace means to stand together as one,” said Andrew Howell, the group’s president and founder. “We started a nonprofit to bring people together promoting peace as one unit. We need to keep promoting peace. There are a lot of good people in this world. But some need to reach out and get more actively involved. Race for Peace only works if we have togetherness, creating peace between citizens of our nation and police.”

This Saturday, June 12, Race for Peace will hold its 5th annual meet and greet at the King of Prussia Mall outside the main entrance next to Neiman Marcus and Lux Cafe at 160 North Gulph Road in King of Prussia, from 11 a.m. to 2 p.m.

In addition to members of Race for Peace, officers from Lower Merion, Upper Merion, Radnor, Philadelphia, Tredyffrin, Bensalem, and Upper Moreland are expected to attend.