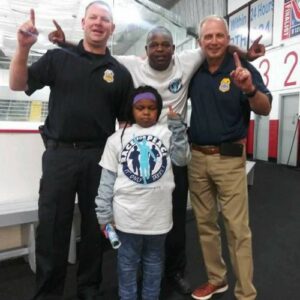 Race for Peace and the Haverford Police are holding their 4th annual Ice Skate for Peace on July 19.

Race for Peace is a nonprofit group that seeks to promote better relations between police and African Americans. It is just one of several events that Race for Peace holds during the year to bring police and Black people together to foster friendship and understanding.

“Race for Peace Organization brings communities together through programs, resources, and activities for the family, and to reach an understanding between law enforcement and the communities they serve,” said Alim Howell, an activist, advocate, and spokesperson for the group. Howell and his father, Andrew Howell, of Delaware County, started the organization in 2016.

“All of the Race for Peace events bring together diversity and unity within the community. In addition to bringing a positive engagement with our police officers. Having youth alongside Police in a positive manner is very great to see,” said Howell.

Haverford Police Lt. James Kelly said the department has been working with Race for Peace for about 10 years to try to foster better relations with the community. And various other departments in the area, including Lower Merion, Philadelphia, Radnor, and Tredyffrin are also involved.

The Skate for Peace event allows people, especially youngsters, to meet police officers in a friendly environment and talk and get to know each other, he said. Haverford Township owns the indoor ice rink and donated the time to Race for Peace.

As a bonus, the Philadelphia Flyers will be hosting a simultaneous event in the parking lot, with some players, food, fun, and its mascot, Gritty.

“It’s helpful,” said Kelly, about the connections with the community fostered by Race for Peace. “The world has a lot of problems right now. To solve them, it always starts somewhere. It starts with one person at a time, as Race for Peace founder, Andrew Howell, says.”

Race for Peace President Hameen Diggins said, “Our young people are awesome! Having the youth show up to our past events was an honor. We want to see greatness from them to create better connections with the new generations.”

About 10 Haverford officers and command usually staff attend, as well as police from other area departments, Diggins said.