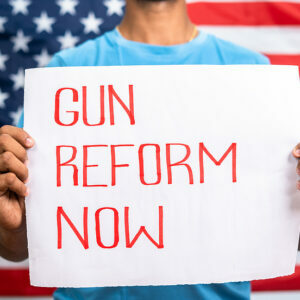 Point: Gun Control Should Be a Winning Issue in November

For another point of view please see: Counterpoint: Gun Violence is an Important Issue But not the Most Important

Gun violence is a clear and present danger to the lives of Americans. Voters want to address it, and candidates need to follow.

From horrific mass shootings to the slower but grislier toll of daily gun homicides, gun violence is an epidemic that killed more than 45,000 people in this country last year — an increase of  43 percent from the previous decade.

This year, the horrific murders of children and teachers in Uvalde, Texas, the racially motivated execution of Black shoppers in Buffalo, N.Y., and the combat-style killing of families watching a 4th of July parade in Highland Park, Ill., have again burst open our hearts and minds.

These unspeakable tragedies are just the tip of the iceberg. The first six months of 2022 saw more than 350 mass shootings.

With a gun homicide rate well over 20 times that of Europe and Australia, the U.S. leads the developed world in firearm homicides by a long shot. And to our shame, we’re the only industrialized country in the world where gun violence is the leading cause of death for children.

What could account for this? It’s not complicated — because we have the highest rate of civilian-owned guns per capita. Even within the United States, gun deaths are highest in the states with the fewest gun restrictions.

The evidence is clear that the more guns and fewer gun-safety measures a country has, the greater the violence and death from firearms.

Assault rifles are especially deadly, designed to inflict the greatest lethal damage to the human body and in rapid-fire volleys. Evidence shows six times more people are murdered in a mass shooting with an assault weapon than with a handgun.

Finally, courts have repeatedly found that gun safety does not conflict with the Second Amendment. And the right to bear arms simply does not override the right to life.

But the pro-gun lobby not only ignores these facts bit it also propagates outright distortions by vastly outspending all of the gun-safety organizations. The NRA is one of the largest special interest lobbies in the United States, and it spends freely to peddle its lies and buy off politicians willing to repeat them.

As a result, too many politicians are wary of running explicitly on gun safety — and Congress has done almost nothing to address it.

The federal ban on assault weapons expired in 2004 and attempts to revive it were weak until the massacre in Uvalde. This year the Democratic-controlled U.S. House passed an assault weapons ban. Still, it had no chance in the anti-majoritarian Senate.

In a glimmer of hope after Uvalde, lawmakers finally passed the Bipartisan Safer Communities Act this summer. The bill made modest advances by requiring background checks for gun buyers under age 21, tightening the so-called “boyfriend loophole” that gives unmarried domestic abusers access to guns, and providing needed funding for mental health care.

Still, it contains little actual gun control. Instead, the new law invests $300 million in so-called “school safety” measures that are nothing more than the manifestation of the false NRA narrative that militarizing our schools makes us all safer.

But not all gun-safety candidates are intimidated by the NRA’s money and influence — even in traditionally pro-gun states.

Rep. Lucy McBath, whose son was murdered in a shooting, won a series of tough races in Georgia with a message about stopping gun violence. Gubernatorial candidate Stacey Abrams is running on a gun-control agenda in the same state. And in Texas, former Rep. Beto O’Rourke is challenging the NRA-funded Gov. Greg Abbot on a gun safety agenda, with voters saying they trust O’Rourke more on the issue of guns.

Elections are complicated, so these candidates may or may not triumph. But their willingness to take on the gun industry and its special interest front groups shouldn’t be surprising. More than two-thirds of voters tell pollsters they want stricter gun control measures. It seems clear that a common-sense message about stricter gun laws should be a winning one.

We all want our families to be safe, making common-sense gun control a winning issue. Candidates should campaign proudly on a gun-safety agenda.

Karen Dolan directs the Criminalization of Race and Poverty Project at the Institute for Policy Studies. She wrote this for InsideSources.com.