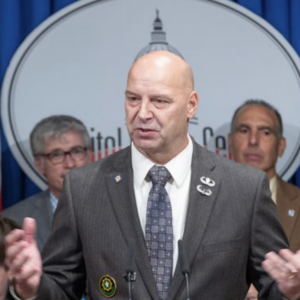 The Democrat-controlled congressional committee investigating the January 6, 2021 riot at the U.S. Capitol has subpoenaed a Pennsylvania state senator to testify.

Sen. Doug Mastriano (R-Franklin), who is running for governor, attended the rally for former President Donald Trump, but he did not participate in the riot or enter the Capitol building.

“Based on publicly available information and information produced to the Select Committee, we believe that you have documents and information that are relevant to the Select Committee’s investigation. For example, we understand that you have knowledge of and participated in a plan to arrange for an alternate slate of electors to be presented to the President of the Senate on January 6, 2021, and we understand that you spoke with former President Trump about your post-election activities,” the letter to Mastriano from committee Chairman Rep. Bernie G. Thompson (D-Miss.) said.

”Based on your public statements, we understand that you were present during the attack on the U.S. Capitol on January 6, 2021, and that you witnessed ‘agitators…getting in the face of the police’ and ‘agitators…start pushing the police up the [Capitol] steps,'” the letter said.

The subpoena is unlikely to hurt Mastriano’s chances in the GOP primary, political observers agree. But it could prove a liability in the general election if he were to be the Republican nominee. A recent poll of primary voters showed Mastriano within 4 points of frontrunner Lou Barletta, a former congressman.

“I think it is too soon to tell whether this is going to become an issue for the Mastriano campaign,” said Berwood Yost, director of the Floyd Institute for Public Policy at Franklin & Marshall College. “I think it could help him with his core supporters generally and with those in the Republican Party who align with former President Trump if he chooses to defy the subpoena, which could be a benefit in the primary campaign. Complying with the subpoena could hurt him with those same voters. However this works out for the primary, I could see this as being harmful to a general election race.”

Mastriano was first elected to the state Senate in May 2019.

Mastriano could not immediately be reached for comment regarding the committee’s demand that he testify.

He is on record questioning the integrity of 2020 election. Mastriano also traveled to Arizona to observe the forensic audit there, before calling for a similar audit to be performed in Pennsylvania.

However, after running afoul of the Senate leadership, Mastriano was stripped of the job of overseeing the audit, replaced by Senate Intergovernmental Operations Committee Chairman Sen. Chris Dush (R-Jefferson). Mastriano has continued to push for election integrity in the commonwealth, including his opposition to changes made to Act 77, which allows no-excuse mail-in ballots.

The audit remains tied up in court because of a lawsuit brought by Attorney General Josh Shapiro. Shapiro, a Democrat, is also running for governor.