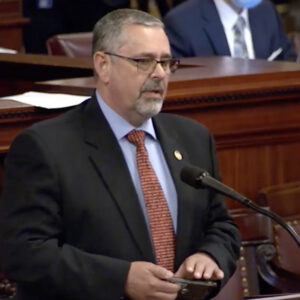 Pennsylvania Republican state senators are seeking testimony from people who witnessed election fraud in the November 2020 election. However, Democrats are pushing back.

Voters should submit information only if they experienced irregularities or other election improprieties firsthand. State residents can share their stories and contact information. The information will help lawmakers develop potential improvements to state law to bolster election security. The Oct. 1 date matches the deadline for the Department of State to respond to subpoenas issued by the committee last week.

Dush noted that testimony is only being accepted from Pennsylvania residents, and the infractions must have been witnessed in person or affected the state resident personally. In addition, members of the public should submit testimony on the webpage only if they are comfortable signing an affidavit and potentially testifying under oath at a Senate committee hearing under penalty of perjury.

“I shouldn’t be surprised at this point that my colleagues on the other side of the aisle are prioritizing their misinformation campaign over supporting working families, but I am,” said Sen. John Kane (D-Chester). “The 2020 election was the most free and fair election in American history. It was audited twice, and affirmed by the courts over a dozen times. It’s time to move on and get back to doing actual work for Pennsylvanians.”

Sen. Amanda Cappelletti (D-Montgomery/Delaware) said, “Senator Dush’s focus on finding problems that do not actually exist only creates confusion and wastes taxpayer money. His efforts and determination would be much better utilized if he was focused on problems that actually exist in Pennsylvania that we can fix. Our legislature needs to focus on the existential threat of climate change, addressing the pandemic, creating fair and equitable school funding – things that are real and matter to the citizens of Pennsylvania.”

Meanwhile, Attorney General Josh Shapiro is suing to prevent the collection of voter information, including driver’s license numbers and the last for digits of social security numbers, as part of the GOP election fraud investigation.

“Giving this data away would compromise the privacy of every Pennsylvania voter — that violates Pennsylvanians’ constitutional rights. By trying to pry into everyone’s driver’s license numbers and social security numbers they have gone too far,” said Shapiro.

The lawsuit, which was filed Sept. 23 in Commonwealth Court, argues the committee’s subpoenas demand Pennsylvanians’ constitutionally protected information without providing a reasonable justification for needing that data.