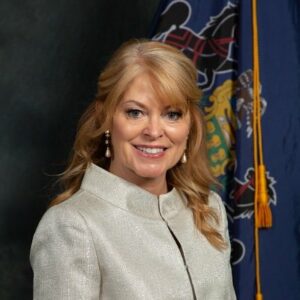 The letter was organized by the State Financial Officer Foundation (SFOF), a group of Republican state auditors and treasurers whose mission is to “drive sound fiscal policy.”

The missive, signed by financial officers from Alaska to Florida, calls energy “a critical component of every business and service provided in our economy as well as foundational to every American’s quality of life. As energy costs rise, its impact is felt throughout society. Businesses experience increased costs, which must often be passed onto consumers, while many Americans are forced to decide between various necessities of life, simply to keep the lights on and their vehicles powered.”

Energy production and its fiscal impact are particularly important in Pennsylvania, the nation’s second-largest producer of natural gas. Revenue from Pennsylvania’s natural gas tax is expected to hit $233 million this year, a near-record level.

“The current economic climate, amplified by the Russian invasion of Ukraine, requires immediate action at the national level,” Garrity said in a statement. “Hardworking families everywhere are paying more to keep food on the table and paying too much at the gas pumps. Our current federal policies are making the problem even worse.”

The SFOF letter pushed back on the Biden administration’s suggestion that electric vehicles are the solution to high energy prices.

“Instead of asking Americans to purchase electric vehicles—which is simply not an option for a great number of American families—government leaders should eliminate barriers to and expand development of these critical resources, bringing down the price of gas at the pump,” they wrote. “SFOF state leaders urge you to support traditional energy industries in their desire to ramp up production in the U.S. by providing certainty on oil and natural gas leasing by compelling the Department of Interior (DOI) to meet deadlines and honor its obligation to lease on federal lands and waters.”

“America has abundant natural resources right under our own feet,” she said. “The Biden administration should be doing all it can to support efforts to harness these materials to achieve energy independence, instead of backing policies that make us more dependent on other nations. Investing in our own reliable energy sources is an investment in American families, and imperative to our national security.”