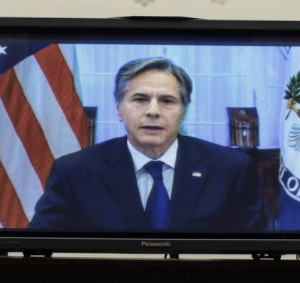 During his opening testimony before the House Committee on Foreign Affairs, Blinken said “even the most pessimistic” intelligence last summer did not predict the Afghan government would fall in 11 days to the extremist Taliban. But he added the Biden administration still planned for “a wide range of contingencies” and had executed the sudden evacuation well.

“We should be proud of what we’re doing,” Blinken told the committee, adding the administration could also take credit for welcoming refugees from the new Taliban regime.

Fitzpatrick, the only GOP member of Congress from the Delaware Valley, asked Blinken about the impression the Afghan evacuation gave of American military weakness, pushing the secretary to say whether the Biden administration’s actions represented “a display of strength.”

Fitzpatrick said it was anything but.

“I just returned from Ukraine two days ago, my next stop will be Taiwan,” Fitzpatrick said. “These people are scared to death.”

Fitzpatrick also challenged Blinken to explain why U.S. military equipment trackable by GPS had yet to be destroyed despite being in Taliban hands.

“I’m not the expert on this and I defer to my colleagues in the Pentagon,” Blinken told Fitzpatrick of the still-undestroyed military equipment now in militant hands.

Houlahan said she supported the administration’s Afghanistan policy, though she conceded, “I do think this process was not without its missteps.”

In response to Houlahan’s questions about abandoning Bagram Air Base, Blinken said it was part of the drawdown plan and required too many troops to defend.

Houlahan further questioned the wisdom of Biden pushing for a withdrawal before the 9/11 anniversary, widely criticized as a purely political, rather than logistical, decision.

Perry used his time to push Blinken to say how many of the Afghan refugees had arrived in the U.S. without meeting the qualifications for a Special Immigrant Visa.

Blinken responded “approximately 60,000” immigrants have been received through a “rigorous screening process” that will include mandatory COVID-19 vaccination as a condition of resettlement in the US. He said, “some…will have been through the SIV process, but not all of them.”

Irked at not receiving a clear answer, Perry then shifted topics, asking Blinken whether relief money was ending up in the hands of terrorist organizations.

“So I would say we should no longer pay Pakistan and we should pay India,” Perry said after Blinken denied that any money was being funneled to terrorists.

In opening statements prior to Blinken’s appearance by video link, committee chairman Rep. Gregory Meeks (D-NY) blamed the Trump administration for locking the Biden administration into a deal with the Taliban, while ranking member Rep. Michael McCaul (R-Texas) called the execution an unconditional surrender to U.S. enemies as well as a betrayal of American allies.

“Our allies no longer trust us,” McCaul said.

In addition to images of desperate Afghans clinging to evacuation planes and falling to their deaths, Americans were treated to the horror of an ISIS-K suicide bomber killing 13 military service members and 95 Afghans at the Kabul airport during the pullout.

Following this attack, the Biden administration launched a drone strike that it said eliminated the ISIS-K bomb planner and a car full of explosives.

But concurrent investigations of video footage by The New York Times and The Washington Post last Friday confirmed the attack actually killed only civilians, including several children and a U.S.-allied aid worker carrying water, and that the car contained no explosives.

After thanking Blinken and Biden for “ending our longest war,” Rep. Ilhan Omar (D-MN) broke from the script, asking about the Aug. 29 drone strike that she said represented a “not uncommon” pattern of the U.S. claiming military successes for attacks that were later revealed to have killed civilians.

“How can you possibly assure us that our drone strikes…will actually reach their targets?” Omar asked.

Blinken responded that the strike “is being looked at very, very carefully” to better understand what happened.

“If people see [drones] as a tool to do harm to innocent civilians…that will undermine support in what we’re doing,” Blinken admitted.

Monday’s hearing marked the first congressional inquiry into the Biden administration’s handling of the Afghanistan debacle and collapse of the U.S.-supported government. Blinken is scheduled to speak at a companion Senate committee hearing on Tuesday.