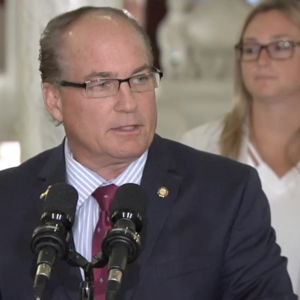 Helping communities recover from Tropical Storm Ida, the opioid addiction epidemic, and restoring local control for mask mandates are all at the top of legislative priorities for Republicans in Harrisburg, House and Senate leaders said Monday.

As for the opioid addiction crisis, the legislators say they hope to work collaboratively with the governor to pass measures to tackle that ongoing problem.

“Together, we can find a strategy to fight this devastating scourge,” said Benninghoff.

Many state residents believe local control is the best way to cope with the pandemic since different regions are affected differently, he said. But Wolf has issued a statewide mask mandate for schools that took effect Sept. 7.

“In the nearly two weeks since the mandate went into effect, our members have been overwhelmingly inundated with comments, calls, concerns, even visits from parents, families, students, school board members, and other local officials as well who predominately agree that local control is best,”  he said. The goal is to “try to keep our children in school as much as possible.”

House Speaker Brian Cutlter (R-Lancaster) said, “We consistently fought for local control because we feel they’re the best informed and the closest to the people in making this decision.” Wolf had agreed with the legislature on this stance in August, then changed his mind and issued a statewide mask mandate, said Cutler.

Senate Majority Leader Kim Ward (R-Westmoreland) outlined similar goals in a phone call with the press Monday but also touched on other issues, including redistricting and election integrity.

“The goal is to return Pennsylvania back to a full-employment economy, to be stabilized with consideration to the status of COVID-19,” said Ward. The pandemic is “not going away,” and while Wolf’s efforts are “well-intended,” his “approach does not consider the geography and cultures across our commonwealth.”

Wolf’s actions, along with President Biden’s, fuel “mistrust of government among Pennsylvanians by creating greater fear, confusion, and chaos.”  Pennsylvania residents had voted “overwhelmingly” earlier this year to limit the governor’s emergency powers, she pointed out.

Meanwhile, Wolf has promised to work with the legislature on the ongoing opioid crisis, she said. An area of agreement is telemedicine, “which I totally support,” Ward said.

“We will work with the attorney general on appropriating opioid settlement dollars and finding proactive ways to combat the rise of opioid addiction, working with the House and the governor” she said.  “We can see things move as early as the last week in September.”

And for the damage from Tropical Storm Ida, the emergency order is coming to an end so the legislature will work to extend it, she said.

Meanwhile, the redistricting process is continuing “despite delays in delivery of the Census data.” And the public has been invited to weigh in. As for the issue of prisoners being counted where they are incarcerated, Ward said she favors that and will introduce an amendment to count those who are to be jailed for 10 years or more at their prison site. Areas where the prisons are sited often have to provide resources to those inmates, she said.  Benninghoff said in a press release Tuesday he supports Ward on the prisoner issue.

Meanwhile, Ward favors examining the state’s election laws. In 2020, “Pennsylvania had some of the most significant changes in election law in 20 years,” said Ward. “The implementation of those laws was managed aggressively by the Department of State…That same Department of State issued last-minute guidance to counties, which the counties testified repeatedly caused confusion.”

But the state Supreme Court, which she characterized as “the most political court in the country,” then “chose to legislate from the bench,” adding things that were “not part of our original legislation.”

“I remember saying, ‘What’s a dropbox?’” Also, the Department of State gave voter information to “many third-party vendors,” who had access to the state’s voter database.  The Senate’s subpoenas ask for the same information that election officials had already given those groups, she said.