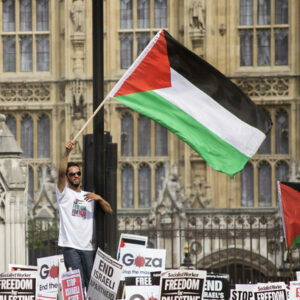 OPINION: 75 Years On, the Dead End of Palestinian Grievance

Nov. 29 will mark 75 years since United Nations General Assembly Resolution 181, which endorsed the establishment of neighboring Jewish and Arab states in the Holy Land.

One of the U.N.’s most significant decisions, it helped restore a sovereign country for Jews in the ancestral land from which they were exiled by the Romans, who renamed the territory Syria Palaestina.

For Palestinian Arabs, the plan offered something even more groundbreaking: the creation of a Palestinian country for the first time.

But it is only Israelis who will soon celebrate the 75th anniversary of their country’s birth–and its hard-won success. Palestinian leaders will do what they’ve always done: bemoaning the deferral of Palestinian nationalism’s stated primary objective and incriminating Israel in it.

Often, this incrimination takes the form of delegitimization – by presenting Israel as a foreign, “colonial” entity and by vilifying Israel as evil.

Palestinian advocates frequently promote a map showing Israel’s share of the land expanding from 1948 until today, while Palestinians’ has diminished. The message is clear: Zionist territorial gluttony is boundless – and Palestinians are nothing but dispossessed underdogs.

Appearances, however, can be deceiving. Palestinian activists, now with the help of an automatic U.N. majority maintained by nearly 60 Arab and Muslim governments, have perfected the craft of political polemicizing.

Beyond the decades and centuries omitted from Palestinians’ visual synopsis of Israeli-Palestinian history is all that it obscures even during the period it highlights.

After all, it was the Zionists who, in 1947, embraced Resolution 181’s two-state vision–even with Jews offered but a small fraction of their small homeland, and no share in its beating heart, Jerusalem.

The Arab side refused and fought repeated wars to eliminate Israel–gradually losing territory in the process.

Arab governments declined to establish a Palestinian state even when they fully controlled the West Bank and Gaza Strip from 1949 until 1967. The Palestine Liberation Organization was founded with a charter plotting Israel’s total destruction.

In 1967, the Arab League declared, “no peace with Israel, no recognition of Israel, no negotiations with it.”

It was Palestinians who in the 1980s launched the first violent “intifada” against Israel and sparked Israeli-Lebanese warfare by attacking Israel from Lebanon.

Fanatic Palestinian groups like Hamas and Islamic Jihad – proxies of Iran, which pledges “death to America, death to Israel” – sought to undermine reconciliation with waves of suicide bombings in the 1990s. The atrocities came following the Oslo Accords, which afforded almost all Palestinians self-rule.

At talks at Camp David in 2000, a dovish Israeli government extended an unprecedented offer of Palestinian statehood in nearly all the so-called “occupied territories” – compromising even on Jerusalem and Judaism’s single holiest site, the Temple Mount.

Palestinians balked–causing then-President Bill Clinton to tell PLO leader Yasser Arafat, “I’m a colossal failure, and you made me one”–and began an even deadlier intifada.

Later, in 2005, Prime Minister Ariel Sharon initiated a complete, unilateral Israeli withdrawal from Gaza, including every single Jewish settlement community. Within months, Hamas violently seized the territory and escalated incessant terrorism from it.

In 2008, Sharon’s successor, Ehud Olmert, went even further than the Camp David proposals.

Mahmoud Abbas, Arafat’s replacement, declined to accept or even make a counteroffer.

Instead, Abbas has given speeches maligning Israel as an “apartheid” state and explicitly tried to “internationalize” the conflict by weaponizing U.N. bodies against Israel.

He has also invented a way for Palestinians to have their cake and eat it too, by having the U.N. recognize in 2012 a not-yet-existent “State of Palestine” even as Palestinians evade all the responsibilities of a state by asserting they remain wholly under occupation.

He also decries the failure of Resolution 181 to deliver Palestinian statehood while continuing to reject the critical other half of the resolution’s program: Israel’s existence as a Jewish state.

Abbas claims that Israel’s Jewish identity makes it inherently discriminatory. He has expressed no similar concerns about the dozens of countries whose flag features a crescent or a cross.

In 1947, two years after the Holocaust, desperate but visionary Jews grasped a modest opening for a better future and made something of it, building a thriving, democratic state despite all odds–and peace with multiple Arab and Muslim countries.

This Nov. 29, the U.N. will mark its annual day of solidarity with Palestinians – the only such day for a particular people–and Palestinian representatives will again rue the lot of their constituency.

If that lot is to change, Palestinians’ approach must too. Seventy-five years of grievance, aggression, and maximalism have yielded little.

Over the next 75 years, a path of compromise and cooperation can reap far greater dividends. We’ve seen Israel do it.

David J. Michaels is director of United Nations and Intercommunal Affairs for B’nai B’rith. He wrote this for InsideSources.com.

Daniel S. Mariaschin is CEO of B’nai B’rith International. He wrote this for InsideSources.com.