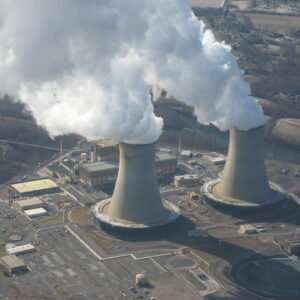 As New Jersey taxpayers prepare to pour $1 billion into the nuclear industry in their state, some in Pennsylvania say Gov. Tom Wolf is pushing a tax-funded bailout of his own.

“Governor Wolf is pursuing a backdoor nuke bailout through the Regional Greenhouse Gas Initiative (RGGI), which would put a carbon tax — not a radioactive waste tax — on electricity generation,” said David Taylor, president & CEO of the Pennsylvania Manufacturers’ Association and a member of the No Nuke Bailout coalition.

On Tuesday, New Jersey’s Board of Public Utilities voted to extend $300 million a year in subsidies to PSE&G and Exelon Generation, operators of three southern New Jersey nuclear power plants.

“Today’s decision prioritizes public health and our environment by ensuring emissions will not go up as a result of losing nuclear power. Keeping the plants running will also maintain the stability of New Jersey’s electricity grid and support over 1,000 good-paying jobs, both of which are central in helping the State’s economy recover from the COVID-19 pandemic,” said NJBPU president Joseph L. Fiordaliso.

The electricity generated by these plants is sold on the same PJM regional transmission power grid as power from Excelon’s Limerick Generating Station in Pottstown, raising concerns about the facility’s future.

Exelon closed its Oyster Creek, N.J. reactors in 2018 and Three Mile Island in Pennsylvania a year later. Exelon also operates the Peach Bottom nuclear power plant in Pennsylvania, while owning 43 percent of Salem Generating Station in New Jersey. What will happen to Limerick in the competitive energy market?

“During the transition period, the nukes raked in $9 billion extra from the ratepayers through surcharges to pay for the value of their reactors,” Taylor said. “Only after natural gas became recoverable from the Marcellus Shale formation in 2005 and production took off around 2008 did the nukes suddenly reverse course and decide that competition was no fun.”

Is gas-powered electricity cheaper than nuclear?

“The answer is it depends,” said Kenny Stein, director of policy at Institute for Energy Research told Delaware Valley Journal. “In Texas, where natural gas is insanely cheap, gas is much cheaper for electricity, but in New England, where they have to import gas, nuclear is cheaper.”

There is also individual variability between plants, said Stein.

“Nuclear power plants do not all have the same running costs,” he continued. “Nor do gas plants for that matter, but the biggest variable cost for natural gas is the price of their gas supply.”

According to data from the Energy Information Agency, in 2019 the total cost per kilowatt hour from nuclear was slightly lower ($0.24) than for gas-generated power ($0.28). However, nuclear costs have been rising over the past decade, while the cost of gas turbine electricity has been cut in half – almost entirely thanks to cheap natural gas.

But for politicians like Wolf, there are other considerations. Limerick has been part of the Pottstown community for decades, providing what calls hundreds of well-paying jobs and millions of economic support. For example, the company pays $5.3 million in taxes annually for schools, roads, and other public services.

Meanwhile, nuclear power is thought to be a part of President Joe Biden’s plans for energy and the environment. While so-called green groups are concerned about nuclear energy, particularly nuclear waste, more green activists are acknowledging that zero-carbon emissions targets will likely never be reached without nuclear as part of the mix.

Still, Taylor said, you can’t ignore the issue of price and subsidies.

“We believe in market-based pricing for energy because energy is a major business input for manufacturing,” he said. “For some manufacturers, energy is the most expensive cost input.”