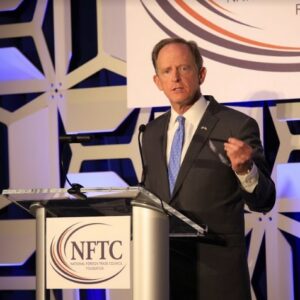 Okonjo-Iweala, this year’s World Trade Award recipient, was honored for her efforts to modernize the organization and her leadership of initiatives to improve trade facilitation and address supply chain challenges during the pandemic.

In accepting the award, Okonjo-Iweala stressed the importance of strengthening the multilateral trading system at a time of great international uncertainty, calling it a “public good.” She also emphasized the role of trade as a source of resilience, adding that “retreating from trade would make countries more, not less vulnerable.”

Toomey, this year’s International Tax Award recipient, was recognized for his steadfast support of an international taxation system that allows American companies to compete globally.

Toomey extolled the economic gains that followed the passage of the Tax Cuts and Jobs Act (TCJA) which “made American companies and workers more competitive globally and our economy more dynamic” by reforming the corporate tax code “so that America would be a more attractive and competitive place to invest and grow a business.”

Toomey also stressed the importance of a globally competitive tax regime that drives economic growth and highlighted the role of trade “in driving economic growth, better choices and lower costs for consumers and better jobs for workers.”

Harrell spoke about America’s role as a leader in digital trade. He emphasized U.S. efforts to advance a positive vision for an open, global internet, promote trusted digital technologies, and counter digital authoritarianism and protectionism.

In closing, NFTC President Jake Colvin reiterated the critical importance of U.S. leadership in the global economy, adding that “America has a unique opportunity to work with our allies to write the rules of the road for the 21st Century — and to do so in ways that will strengthen supply chains, tame inflation, address shared labor and environmental goals and enhance inclusive economic growth.”

The NFTC Foundation’s World Trade Dinner has become a valued tradition for guests including senior U.S. government officials, diplomats, and top executives of critical global industries. This year’s dinner was held at the Planet Word Museum in Washington D.C.