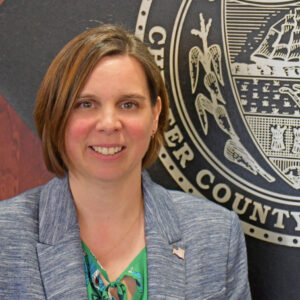 With the emphasis on election security in the wake of 2020’s voting and the tide of controversial mail-in ballots, the position of director of voter services is more important than ever.

On Tuesday, the Chester County commissioners announced the appointment of Karen Barsoum to that job. Barsoum, who has already begun work at her new position, will be paid $93,966. She’s worked in municipal government for more than 10 years, including seven years as assistant director of election services for Berks County.

There she played a key part in researching, procuring, and implementing a new $4.5 million voting system for the 2020 primary and general elections, according to a news release from the county. She was also involved in public outreach and education for the new mail-in voting system. And she reviewed election laws, recruited and trained poll workers, managed polling place research, and administered voter registration for Berks County’s 270,000 some registered voters.

“Chester County is highly regarded in the commonwealth for its practices, procedures, and investments in conducting elections,” Barsoum said. “I am pleased to become part of the voter services team, and look forward to working with everyone who contributes to the election process in Chester County.”

While the appointment of an official to the same post caused a fracas recently in neighboring Delaware County when the GOP objected to the county council hiring someone from outside the county for the position, that issue does not seem to be a problem in Chester County. Michelle Kichline, the sole Republican on the Chester Board of Commissioners voted with the Democrats to unanimously appoint Barsoum.

“Karen Barsoum was hired because she has the experience, knowledge, and understanding of the Pennsylvania Election Code to best lead the Chester County Department of Voter Services,” said county spokeswoman Rebecca Brain. “The County of Chester does not have a policy that prohibits anyone who resides outside of the county from becoming an employee.”

Prior to her career with Berks County, Barsoum served as confidential secretary and events coordinator for the City of Reading Managing Director’s Office. She has also held positions with Twin Valley School District and with West Chester-based Quality Medical Specialists. Barsoum, a native of the Netherlands, where she earned a bachelor’s degree in commercial arts, relocated to Pennsylvania in 2002.

By Daniel Larlham Jr. on January 14, 2022
Pennsylvania counties piled on to the national opioid settlement for their cut of more than…
Read More
News