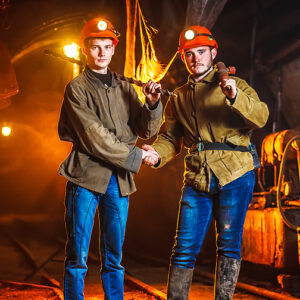 President Joe Biden promised to be a “green” president, but most of that green may be going to China.

As in cold, hard cash.

“It is clear that the demand for key minerals and rare earth metals will skyrocket in the years ahead,” says Michael Stumo, CEO of Coalition for a Prosperous America. “These are the raw materials needed to make President Biden’s clean energy plan a reality.”

It’s not hyperbole. A new analysis from the International Energy Agency (IEA) says supply chains for the elements that make green tech possible — copper, lithium, cobalt, and nickel — aren’t being developed outside of China to meet the growing demand. For example, IEA projects lithium demand for the electric vehicle revolution will be 40 times larger by 2040 than it is today.

Mining is a time-intensive industry, and the IEA is also warning that if these supply chains are not ramped up, countries are not going to be able to deploy any of these technologies at the scale and speed needed to battle climate change.

“It is essential that U.S. mining policy recognizes the urgency of bringing additional mineral production to market under world-leading environmental and labor standards,” said National Mining Association president and CEO Rich Nolan in a statement about the IEA’s analysis.

Because of environmental policies in the U.S. and other western nations, China has been the go-to source for minerals and metals, and Stumo says continued U.S. dependence on China for the mining and processing of critical minerals and rare earths threatens everything vital to our national security and economic productivity.

“It stymies the creation of good-paying jobs for working-class Americans,” says Stumo. “Unless Congress and the Biden administration take action, America’s renewable energy future – and the green jobs that come with it – will be made in China, not the U.S.”

Ironically, Biden told legislators last month we are in competition with China to win the 21st century.

“There’s no reason the blades for wind turbines can’t be built in Pittsburgh instead of Beijing, (and) no reason why American workers can’t lead the world in the production of electric vehicles and batteries,” Biden told a joint session of Congress.

Therein lies the problem. The United States is sitting on a mountain of vital minerals and metals across the periodic table, elements needed to build wind turbines, batteries, and electric vehicles, as well as gas-powered automobiles. A 2011 report in Business Insider said the U.S. and other nations were sitting on a “fortune” of minerals and metals. Even so, governments have not taken steps to harvest them for today’s tools and tech.

In 2019, the operator of the only U.S. mine for rare earth metals said that if we cannot challenge China, no one can. President Trump wanted to open more critical mineral mines, but environmental groups such as the Sierra Club opposed his approach.

“This dangerous plan puts mining companies first, before the needs of communities and workers and at the cost of some of our most important landscapes,” said Michael Brune, executive director of the Sierra Club in a 2019 statement.  “As we have seen continuously from the Trump administration, this is a proposal to further isolate people on the frontlines of the climate crisis and dismiss the importance of protecting public lands and workers from being exploited by mining companies as they have been for decades.”

Brune did acknowledge the need to address our nation’s reliance on these elements to achieve green policy goals. Still, that could be an uphill battle for a Democratic president whose base includes individuals and special interest groups that rank “environment” near the top of our most pressing issues.

The question now is whether Biden – who recently issued an executive order looking at supply chain vulnerabilities – will find ways to develop domestic minerals and metals, or will he appease Green New Deal Democrats such as Rep. Alexandria Ocasio Cortez (D-N.Y.) and Sen. Ed Markey (D-Mass.) by prioritizing their views.

“We can’t import our way to economic and national security,” Nolan said. “We have to establish that security literally from the ground up by using American-mined materials produced by American workers under world-leading environmental standards.”

At least one Republican believes the U.S. can mine at home while continuing to protect our environment.

“It is in America’s economic and national security interest to have a strong, domestic rare earth mineral supply chain, which includes metallurgical capabilities that are not vulnerable to unfair trade actions by Beijing,” Sen. Marco Rubio (R-Fla.) told Delaware Valley Journal in a statement.