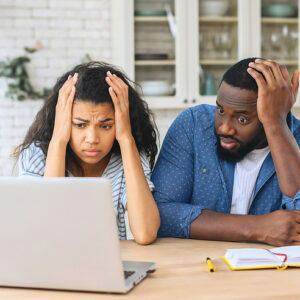 If your household is impacted by inflation, you might want to have a word with your elected officials. A new report from the American Consumer Institute (ACI) ‘s Center for Citizen Research says excessive spending, regulations, and restrictions on domestic energy production have driven up prices for consumers and businesses.

“The combination of increased spending, energy shortages, and increased regulations have led to increases in inflation that have far outpaced wage increases,” according to the report. “Based on our analysis and those of others, consumers are likely to lose thousands of dollars this year alone — by one measure, $4,400 per household in 2022 — disproportionately hurting poorer Americans and those on fixed incomes.”

The report relies on data from the federal Department of Labor, the Bureau of Labor Statistics, and the Department of Commerce, among others.

“This report shows that inflation is increasing much faster than the average wages of American workers, which impacts consumer purchasing power,” says American Consumer Institute’s president and CEO, Steve Pociask. “This is hurting all consumers, but particularly those with the lowest incomes and those on fixed incomes.”

The solution, according to the report, is for Congress and the Biden administration to acknowledge the connection between increased federal spending and rising inflation.

The Biden administration has blamed Russian President Vladimir Putin and supply chain issues for the current 9.1 percent inflation rate. Biden has also blamed Republicans in Congress for getting behind his plan to combat inflation.

“Under my plan for the economy we made extraordinary progress, and put America in a position to tackle a worldwide problem that’s worse everywhere but here: inflation,” Biden said during a June 14 speech in Philadelphia. “The problem is, Republicans in Congress are doing everything they can to stop my plans to bring down costs on ordinary families.”

That, said Biden, is why his plan “is not finished.”

If elected “Oz will work with anyone who wants to see America innovate and drive down the cost of energy in Pennsylvania, move our supply chains back on American soil, and make it easier to buy food and simple things like baby formula. Pennsylvania families have had enough of the radical left. It’s time for change,” she said.

ACI says Congress and the White House should work together to combat inflation, but not in the way the president might want.

“They must take steps to alleviate cost-push inflationary pressure,” the ACI authors recommend. “These pressures have emerged mainly from constraints on supply and onerous regulations which are driving up the price of everyday essentials for consumers.”

Guy Ciarrocchi, the former president of the Chester County Chamber and the Republican who is running for Congress against Rep. Chrissy Houlahan (D-Chester/Berks) said, “Of course inflation is a problem; its problem number one, two and three. While Biden and Chrissy Houlahan tell us to celebrate that gas is only $4.51, we live in the real word: things are really bad. While the so-called “experts” debate whether we’re in a recession, we lose ground every paycheck; every time we go to buy groceries; every time we buy gas.

“Houlahan helped create this mess,” Ciarrrocchi added. “First she ignored it; now, her so-called ‘solutions’ are more of what created this mess. I know inflation is crushing us, I don’t need experts to explain it to me. That’s why I’m running: to fix this mess.”

The authors maintain that recent actions and political efforts by Congress to increase regulations and taxes and impose costs on businesses “ultimately reflected in higher consumer prices.” Similarly, government regulations on domestic energy supplies lead to shortages that drive up domestic energy prices.

“Second, the administration must accept that government stimulus has created demand-pull tensions, where excessive spending creates demand in excess of supply,” the authors wrote. “While this may have been necessary early during the COVID crisis, its continuation and magnitude fueled price hikes, and adding further stimulus in the future will only do the same.”

Instead, Biden and his allies in Congress have stepped up spending, first on a bipartisan $280 billion microchip and science research bill and now a $739 billion package of tax hikes, green energy spending, and increased healthcare subsidies. Economists have debated whether the bill, which raises tax collections by more than $500 billion, will have any measurable impact on inflation.

A new analysis from the nonpartisan Congressional Budget Office, however, notes that only $21 billion in the projected $305 billion of inflation-reducing debt reduction comes in the first five years. The other 90 percent doesn’t happen until after 2026.

“It is time for some self-control by policymakers and to avoid future policies that will only hurt the very consumers these actions are meant to help,” reads the ACI report.

“This report documents that wages are not increasing as fast as inflation. Low-income people are considerably harmed by this situation. Their wages do not enable them, the same purchasing power, but they have little savings to maintain the same level of consumption. Also, fixed income poor people are harmed even more since in many cases their fixed incomes do not have an inflation index that helps maintain their purchasing power.”