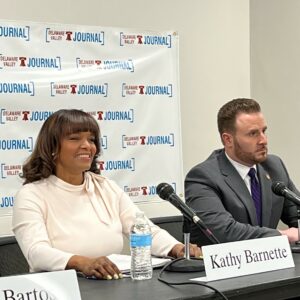 A week before Pennsylvania Republicans pick their U.S. Senate nominee, a new poll shows Kathy Barnette surging into second place and in a virtual three-way tie for the lead.

The poll, conducted by GOP polling firm Trafalgar Group, gives Dr. Mehmet Oz a narrow lead at 24.5 percent, Barnett just behind at 23.2 percent, and hedge fund CEO Dave McCormick at 21.6 percent — all within the poll’s margin of error.

The Trafalgar Group is rated by the data analysts at FiveThirtyEight.com as one of the most accurate polling firms in the country.

For weeks, Oz and McCormick have kept up a barrage of negative ads targeting each other, largely ignoring the rest of the field. Strategists say that has opened a path for a third candidate like Barnette, who has been unscathed by the attacks, to emerge as an alternative.

“The poll certainly shows building momentum for Barnette, which is important going into Election Day,” said GOP political pundit Charlie O’Neill. “However, it’s hard to get a full picture of what this means with just topline totals. Is Barnette taking votes away from Oz or McCormick? Is she converting previously undecided voters? With three candidates all within the margin of error, it appears we’ve moved from a two-way to a three-way race. It’s anyone’s game, but hard to predict the electorate or understand what is surging Barnette with just topline numbers.” 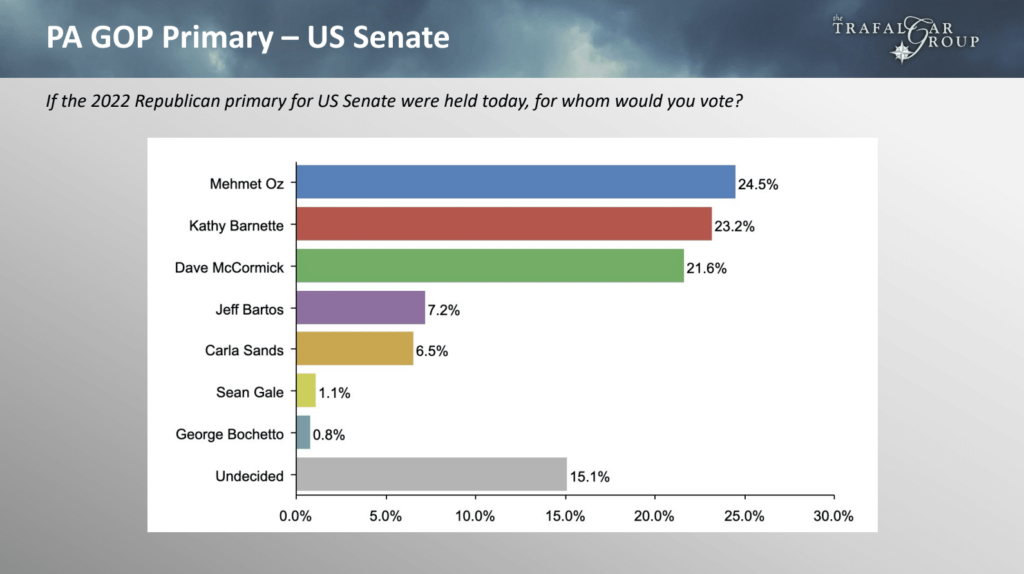 In an email to supporters Monday morning, Barnette noted this poll has her within the margin of error for first place.

“Every bit of our hard work is paying off. Now it is time to hammer this message home and move on to defeating John Fetterman in the fall,” she said. Lt. Gov. John Fetterman is leading the other Democratic candidates by a wide margin.

“Mehmet and Dave have spent $60 million attacking each other and promoting themselves,” Barnette tweeted Friday. “I’ve spent less than $2 million and am within 1.7 percent of first place, a statistical tie. Wait until you see what I’ll do to Fetterman.”

Oz still has the advantage of former President Donald Trump’s endorsement, who held a rally Friday evening near Pittsburgh for Oz.

Barnette is an author and Fox News commentator who ran for Congress against U.S. Rep. Madeleine Dean (D-Montgomery) in 2020.

“I believe that the American family is the main focus of our campaign,” Barnette said during a debate hosted by the Delaware Valley Journal in March.  “If it’s good for the American family, I want to work on legislation that benefits them.”

Barnette’s personal story resonates with many voters. She grew up in extreme poverty in Alabama. Her mother was raped at the age of 11, resulting in her birth. Barnette’s grandparents raised her. She joined the Army Reserve, obtained a college degree, and eventually worked in corporate finance. Barnette, 50, also homeschooled her two children for six years.

“It’s clear Pennsylvanians want a battle-tested, true Pennsylvania conservative in the Senate. Dave McCormick is that candidate and will be the next U.S. Senator from Pennsylvania,” said Jess Szymanski, McCormick campaign spokesperson, when asked to comment on Barnette’s surge.

“The grassroots support and momentum is on Dr. Oz’s side with new endorsements rolling in and we are working hard to get his America First message out to Pennsylvania voters,” said Brittany Yanick, a spokeswoman for Oz. “Anyone who supports President Trump and his America First agenda knows that Dr. Oz will champion this. Dr. Oz is the best candidate to beat the Democrats in November, unlike liberal McCormick. As President Trump stated on Friday night, Dave McCormick is a 100 percent certified RINO, China-First candidate who will represent special interest groups, not Pennsylvanians.”

Meanwhile, Barnette believes she is the best one to reach voters in November.

“This campaign isn’t about me. It’s about us taking back our nation,” Barnette told the Delaware Valley Journal in a previous interview.  She contends her focus is on the American people and the “freedom to live our lives the way we want.” And she claims she isn’t just speaking for the Republican Party but for all Americans.