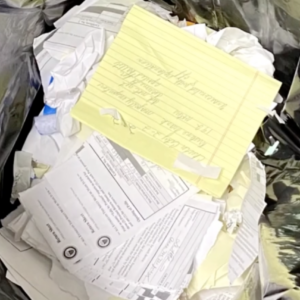 Delaware County District Attorney Jack Stollsteimer announced on social media an investigation into videos that appear to show county election officials destroying ballots and machinery in the 2020 general election. In one video, an official says he’ll make a “campfire” out of the election materials.

The videos, recorded by a whistleblower, are exhibits from a lawsuit against the county and various officials filed Nov. 18 by Delaware County residents Ruth Moton, Leah Hoopes and Gregory Stenstrom, and Moton’s campaign. Moton, a Republican, had run unsuccessfully for the state House in the 159th District, which includes Chester County, in the November 2020 election.

A spokeswoman for the county did not comment on the lawsuit, which was originally filed pro se.  However, Moton told the Delaware Valley Journal the plaintiffs are represented by a lawyer.

Delaware County Executive Director Howard Lazarus said in a statement, “It is the duty of the District Attorney to pursue all credible complaints, and we will support the DA’s efforts to pursue this matter.  We are confident that in the end the allegations will be proven to be fabricated and wholly without merit, and that our systems are worthy of your trust.”

The 91-page lawsuit alleges county election officials violated numerous facets of election law, including destroying results from the Nov. 3, 2020 election once a May 21 Right to Know request was filed.

The suit said that “the defendants fraudulently and intentionally deleted, changed, adulterated, manipulated and/or obscured the information, data, and materials produced in response to the RTK request in order to hide their fraud and election code violations because they knew that they could not reconcile the previously fraudulently reported November 3, 2020 election results with the actual responsive information that they had in their possession and which they were required to preserve and produce in response to the Right to Know request.”

“Plaintiffs know this to be the case and can document this and demonstrate this by showing, among other things, that November 3, 2020 election, data materials, and equipment was [sic] destroyed including but not limited to V-Drives, Return Sheets, machine tapes/proof sheets/result tapes, Mail-In Ballots, Ballots Destroyed, voting machines, hard drives, paper documentation, Blue Crest (scanner) data, correspondence concerning the November 3, 2020 election,” the suit states.

The suit alleges “James Allen (director of elections) conspired with James Savage (the warehouse supervisor) to ‘get rid’ of the ‘pads and second scanners’ from the November 3, 2020 election.  Savage encouraged a private conversation to continue the conversation of the removal of the pads and scanners due to other Delaware County employees and (employee) Regina Miller who were present and witnessed James Savage state that he was aware that the plan of destruction of November 3, 2020, election ‘was a felony.’ ”

In May 2021, Allen (who was hired in March 2021)  allegedly developed a plan to “hide and destroy November 3, 2020, election evidence and conspired with James Savage to create ‘new’ results to provide as a response to the May 21, 2021 Right to Know Request,” the suit alleged.  “Specifically, James Allen and James Savage conspired to create new results with ‘Clean V-Dives’ by removing the election scanners from the locked cages at the Voting Machine Warehouse to have data to consistently match the November 3, 2020 data,” the suit claimed.