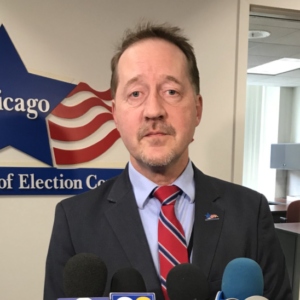 A Delaware County Board of Elections discussion over hiring a Chicago election official to oversee voting in Delaware County sparked an immediate backlash over the cost of the potential hire and why the candidate was not a local.

The board voted Tuesday night to approve the hiring of James Allen, who has spent 14 years as Director of Communications and Strategic Planning for the Chicago Board of Elections, as Delaware County’s Election Services Director.

“Why is Delaware County looking for workers outside of our county when we have so much talent here?” read a statement posted on the Delaware County Republican Party’s Facebook page.

Due to an apparent misunderstanding, the cost of the hire was inflated to $230,000, though the agreed-upon salary cap is $145,000 plus benefits. Still,  Delaware County GOP Committee Chair Tom McGarrigle said that while he recognized the total compensation package figure was unlikely to reach $230,000, his first concern is why the candidate was not from Delaware County.

“We have 560,000 people living in Delaware County,” McGarrigle told DVJournal. “Why not select someone from here?”

The controversy echoes debate over the county council’s decision in August to hire Marianne Jackson to serve as Interim Director of Elections for $20,000 per month, part of a $2 million spending package on the 2020 election some saw as wasteful and excessive.

“Twenty thousand dollars a month, $20,000 a month for an employee,” Republican James J. Byrne Jr. said at the time. “I defy you to find any other county employee that’s being paid $20,000 a month.”

The job of election services director is new for the county, said Marianne Jackson of the county’s Bureau of Elections. The new job involves reporting both to the county’s Executive Director Howard Lazarus, as well as the Board of Elections.

“The person in this role will be in charge of creating a cohesive, modern department,” she said, out of entities that are now separate – the Bureau of Elections, Voter Registration, and the Voting Machine Warehouse.

In response to questions during the Election Board meeting about the $145,000 salary cap and the selection of a candidate from so far away, Delaware County Executive Director Howard Lazarus responded: “It’s a highly specialized job.”

Jackson said the county’s personnel department had conducted a two-month search for the position and Allen stood out as an experienced professional in handling elections operations from his experience in Cook County.

Delco GOP chair McGarrigle said he still wants to see the figure down from $145,000 and someone local in the position.

“It’s a job where you are really only busy twice a year,” McGarrigle said. “It’s too much. And the talent pool is here to fill the job.”