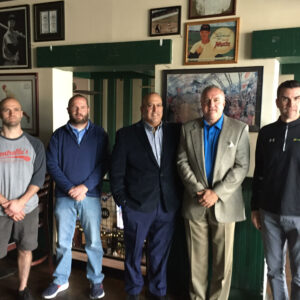 Delaware County should allow municipalities to keep their health inspectors. That was the message from two Republicans running for Delaware County Council–Joe Lombardo and Frank Agovino–who held a press conference Monday at J.D. McGillicuddy’s in Havertown with other small business owners.

County officials had announced the county government would take over the health inspections of restaurants and stores from the 49 municipalities and make those inspections a function of the new county health department, which is slated to open in January 2022.

Lombardo, who is also the Clifton Heights mayor, said the proposal for the new health department to take over the function is a “power grab” by Delaware County that would have “catastrophic effects on our bar and restaurant owners.”

It is “something that sounds good on paper but in practice, will not work,” said Lombardo. “And will only make the situation worse.”

It makes more sense to allow municipalities to continue doing the inspections because it keeps bureaucracy to a minimum and provides a swifter turnaround time to business owners trying to open or have something approved, like a catering job, he said. The county, in its proposed regulations, gives itself 30 days to issue a permit, Lombardo noted.

“Why they’re trying to do this is nothing other than to grab the fee,” he said.

Meanwhile, the county will permit the municipalities to have their local inspectors do other tasks, such as checking restaurant grease traps, he said. But the inspectors are paid through those fees the county would take, so that will be more money for each municipality (and local taxpayers) to expend for the inspections without being allowed to charge a fee.

“It hurts the business owner and hurts the community,” said Lombardo. “For me, it’s taking away something we do for our community, for our businesses in our community.” People will no longer be able to call the borough with a problem and get it fixed quickly.

Agovino said the business owners don’t dispute having a county health department deal with issues such as the COVID-19 pandemic. But they are against the county taking these inspections from the towns.

Lombardo said he sat in on a Zoom conference on the topic with county Councilwoman Monica Taylor. “I don’t think they even know what all they’re going to be doing.”

While the county planned to hire 80 people by January and start the inspections, since then the municipalities have been notified they will not be ready by then.

“You can’t find help,” said Lombardo. “How they thought they were going to hire 80 people by January 1 is beyond me.”

“I don’t know what the rush is,” said Tom Thornton, owner of McGillicuddy’s. “Maybe it’s a good idea in theory for down the road, but do I think it should be implemented by Jan. 1? It doesn’t sound like it at all. As Mr. Lombardo alluded to, it’s just going to create more tax dollars for Haverford Township, if they are not going to be able to charge the fees they charge every year, which vary by the size of your building. Who’s going to pay these people?  The county is just looking for a money grab. At whose expense. At some point, somebody is going to have to pay for the local municipalities for them to pay their employees. So now is that going to fall on the business owners or the taxpayers? Either way, it stinks. It’s  no good for anyone.”

Lombardo added, “We got beat up with the reassessment this year. We’re going to get beat up with this. There’s only so much people can take. People are on fixed incomes. There was an article that came out last week that heating oil and natural gas is going to be up 30 to 50 percent this year in the winter. How much can people take?”

A.J.  Loustau, the owner of Centrella’s Deli, said he was curious to know where the plan is coming from.

“I have a great relationship with the local health department,” he said. “We just went through a remodel. I was on the phone with them often just asking questions about how things need to be set up…they were fantastic. They always have been. I’ve never had an issue…If it ain’t broke why fix it?”

Conor Quinn owner of Kettle, a café, said he agrees with the others.

“Who are you going to call?” Quinn, who is also a Haverford Township commissioner, said that when people call him he will have to refer them to the county instead of handling a problem locally.  “That’s not fair to them.”

Thornton said he goes through Manayunk to a restaurant supply store and noticed during the pandemic that many restaurants there had set up tables for outdoor dining. He brought that idea back and was able to get local approval quickly to help his restaurant stay in business.

“It took one phone call from me to Conor,” said Thornton. “I went to the Board of Commissioners.  If we didn’t have that outdoor dining these doors would be closed and I wouldn’t be standing here today. Things like that, where I needed action sooner than 30 days and it was turned around within 30 days.”

Agovino said the county plans to use federal COVID reimbursement funds to pay for this health inspector program through 2024, but “that’s always a dangerous place when you have one-time money and you’re using it for something that is going to be reoccurring…At the end of the day, it’s going to affect small businesses and taxpayers.”

However, Adrienne Marofsky, a spokeswoman for the county, said the county health department must include an inspection program under state law.

“The state requires the county to take over local inspections under Act 315 in order to be an accredited Health Department,” she said. “Our fees are less than those charged in neighboring counties.”

Meanwhile, the new Health Department is slated to cost $10 million its first year, according to a consultant’s report.