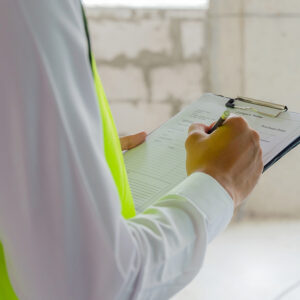 Delaware County restaurants and small businesses may face two sets of inspections — and two sets of fees — when the county launches its health department at the first of next year. That’s just one of the many contentious issues municipal officials confronted Delco representatives over during a recent meeting about the consequences of the new, multi-million-dollar county health department.

Health inspections and local business licensing are a significant source of revenue for local governments, so it’s no surprise the Delaware County Consortium of Governments (COG) hosted representatives of the county during its April 22 meeting to discuss the transition. Delaware Valley Journal obtained a recording of the meeting, during which municipal officials expressed their frustration with the county’s plan to largely subsume local inspections.

On the videocall representing the county were Dr. Monica Taylor, vice-chair of Delaware County Council; Lori Devlin, director of the Delaware County Intercommunity Health Coordination; and Grace Gorenflo, principal of Gorenflo Consulting, Inc., who is assisting with the creation of the new department. Their message to municipalities was the county is in the information-gathering phase, and the more information local towns share with the county, the easier the transition will be to the new, countywide authority. 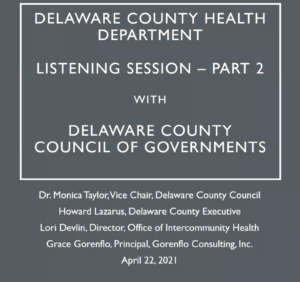 “We’re just here to listen,” Devlin said repeatedly during the meeting, emphasizing that many of the specific questions about fees or what inspections would be left to the localities had yet to be answered. When asked if the county could assure local businesses they won’t see an increase in their fees, Devlin replied, “I can’t assure anyone of anything at this point.”

The message was not well received.

Several municipal officials noted the towns conduct a variety of inspections, such as fire and sewer. And many restaurants have grease traps — receptacles to prevent large amounts of cooking grease and the like from blocking drainage or causing backups — that are not covered by health inspection guidelines set by the state Department of Agriculture.

Jane Billings, who has served as Swarthmore’s borough manager for more than 31 years, suggested the county’s final decisions about which tasks will be left to municipalities will likely be driven by dollars.

“I think, realistically, they’re taking on the things that they’re getting reimbursed by the state for. We all know that. I think that’s why our worry about double inspections is certainly a valid one.”

Some borough managers were hoping their communities might be exempt from the requirement that they defer to the county for health inspections. Billings asked the county representatives directly if Delaware County is required to take over the inspections once a health department is up and running, or are they choosing to do so, rather than leave those inspections to the townships and focus on other public health issues like the pandemic.

Rather than give a direct answer, Dr. Monica Taylor read a portion of state law that appears to show there is no “exemption” back door for any Delaware County municipality.

David Schrieber of Tinicum township pushed back on that argument.

“Based on preliminary conversations with my board, they’re not going to take that lightly,” Schrieber said. “There are so many questions that, unless you hear from an authority higher than the county, there’s going to be a little disagreement, shall I say.”

Sources who were part of the video call tell Delaware Valley Journal they see a two-tier system as most likely, with the county conducting health inspections while municipalities will be left with other areas.

“You could end up with a county health inspection and what might be called ‘fire and life’ safety inspections at the local level,” one municipal official told DVJournal.

It’s not an approach municipal officials appeared to find satisfactory. Several acknowledged not responding to county requests for inventories of restaurants and businesses their towns are currently inspecting, “sending a message” to the county about their concerns.

Municipal officials also appeared to be taken aback when Devlin told them the county had not done an analysis of existing municipal codes and had no plans to do so. Instead, they would default to a single set of county regulations.

And while January 2022 is still more than seven months away, for government bureaucracies this is an extremely swift timeline. The county has yet to hire an inspector, set fees, or even define the reach of its authority.

“Who’s doing the apartment buildings when we have a complaint about mold, things like that?” asked Schrieber. “What about the hotels and their sanitary conditions? Don’t tell us. Well, we’re only doing part of it.

After this story first appeared, DVJournal received a statement from George Needles, Upper Chichester Township Manager and head of COG.

“On April 22, 2021, The Delaware County Consortium of Governments (COG) held its April Monthly Meeting.  The guest speakers for that meeting were representatives from Delaware County Government, speaking on the topic of the creation of a County Health Department as well as their response to COVID-19.

“This was not the first meeting on these topics, as representatives from Delaware County also attended our January meeting.  The leadership of the COG will not be issuing an opinion on this matter.  As stated in the preamble of our bylaws, “The Consortium is not intended to become a new layer of government nor a super-government and is not intended to usurp or infringe on the local government autonomy of the participating municipalities.”

“We believe this topic like all topics we address is important to our members and we will continue to make sure they are aware of changes that may affect them.  We commend the County officials for actively engaging the municipal managers of the COG, and we hope that each members takes the information back to their municipalities and the elected officials act on behalf of the communities they represent.

“All of our member communities are unique and we fully expect to have spirited discussions like the one on April 22nd.  As president, I am honored to lead this group and will continue to work with the COG leadership team to bring relevant topics to our members.”