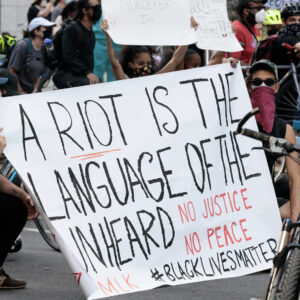 Protests in Philadelphia after the death of George Floyd. (CREDIT: Flicker By RGB CC BY 2.0)
News

Gov. Tom Wolf has activated 1,000 members of the Pennsylvania National Guard in Philadelphia in advance of the announcement of a verdict in the Derek Chauvin case. And now local residents are asking: Should we expect to see violence return to the Philly suburbs as well?

Chauvin is the former Minneapolis police officer facing charges ranging from murder to manslaughter in the death of George Floyd. Video of Chauvin using his knee to pin Floyd to the ground last year sparked political protests, as well as riots and looting, in many American cities, including Philadelphia and the surrounding areas.

In suburban Upper Darby, hundreds of people ran across the city line and looted businesses in the Delaware County community. Vandals also damaged the King of Prussia Mall and the Neshaminy Mall, amid other violent incidents that occurred during the ensuing unrest.

However, there were also peaceful protest marches in the Philly suburbs last June as well.

Mario Meli, 67, a Jenkintown resident, usually keeps his rifles disassembled except when trap shooting. But when he heard that members of the violent group Antifa were coming to the borough to protest last summer, he assembled one rifle and left it by the front door, just in case.

“I’m not going to be violated,” said Meli.  “If you do, you’re going to pay the consequences.”

While the collar counties have not requested the National Guard, area police are taking steps to deal with any looting or vandalism that might occur.

Fred Harran, director of public safety for Bensalem, did not want to give any specifics about his department’s preparations.

Bensalem residents are generally peaceful and the department respects their First Amendment right to protest peacefully, he added.

Lower Merion Police Superintendent Michael McGrath said there was no violence in Lower Merion last summer and that people have a right to peacefully protest.

“We’re following the trial, as probably every community in the nation has done,” said McGrath. While he did not cancel any officers’ vacations to be sure enough officers are on hand to cope with any unrest, the LMPD does have an alert system to call in off-duty officers if needed.

“Frankly it’s going to depend on the outcome of the trial and who leads the protests,” said McGrath. “Peaceful protests we see all the time. There is no major concern. But when people with ill intent get involved we need to address it.”

In response to a question on Facebook, several Delaware Valley residents said they are concerned about more violence in Philadelphia and the outlying areas once the jury renders its verdict in the Chauvin case. And some said violence would be justified if the verdict is not guilty. Others blamed the police for last summer’s riots and some who commented blamed the news media.

“Oh, it is going to be a complete mess of riots and looting on a major scale as close to us Lawncrest and Cottman Avenue and the Cheltenham Square Mall area of shopping centers, if Chauvin gets anything short of first degree,” said Kristie Rehnig on the Elkins Park Happenings page on Facebook. “And realistically, from a technical, legal perspective, the crime committed, heinous and egregious as it was, falls short of meeting all the component criteria for first-degree murder.”

“So, yeah, we are all screwed, in a broad sense, whenever this verdict comes out,” she added. “Rioters/vandals and looters are Not protesters. They are calculated opportunists who give civil protestors a bad name, and hurt small businesses and the collective standard of living and morale of whole communities. Sad that they have to, but thank the Lord they are sending the National Guard as an advance precautionary measure. I am scared for and worried for local business owners.”

“Look, I hope there’s not violence,” said Danielle Gleason. “I always hope there’s not violence. I never want anyone to get hurt, or businesses to be burned, or things to be stolen. But if I watched a video of my son getting murdered by a police officer kneeling on his neck, or watched my 13-year-old child be shot at by police while he was trying to raise his hands over his head, or had to get a phone call from my son telling me he was getting pulled over and the next thing I heard, he had been shot by someone who was supposed to be keeping people safe, I don’t think there is any way on God’s green earth that I WOULDN’T burn this entire place to the damn ground.”

And Shane Noah said, “I’m worried about the continued assault on the Black community, not about anyone’s justified response if they let that murderer go.”

Upper Darby was particularly hard hit with hundreds of looters and vandals breaking windows and stealing from small businesses along Market Street. Although Police Superintendent Timothy Bernhardt did not respond to requests for comment, one local business owner, who didn’t want his name to appear in print, said he is very worried about what might happen.