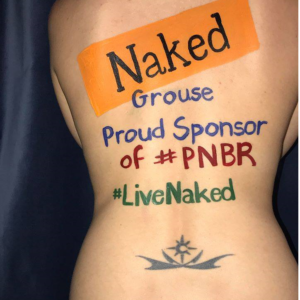 From the “every cloud has a silver lining” file: While COVID caused massive devastation and disruption across the Delaware Valley, it also forced the cancellation of Philadelphia’s Naked Bike Ride.

If you haven’t heard of the event, you’re not alone. It’s not exactly a tradition along the lines of the Fourth of July fireworks or the Thanksgiving Day Parade. I don’t even think it’s on the municipal calendar of events, although given the fact that Jim Kenney erased Columbus Day and replaced it with Indigenous Person’s Day, it’s possible he also penned in “Nude Dude Interlude” on the city books, too.

And now, as we slowly emerge from the darkest days of the plague year, the naked folk are also emerging from their clothing and getting ready to once again ride through the City of Brotherly Love at the end of August. As long as they give us enough notice, I suppose that’s fine. If I know when and where my eyes are likely to be assaulted by a jiggling abundance of sweating, tattooed, tanned and similarly unappetizing epidermis, I can plan my optical escape route.

No harm, no foul.

But I think it does merit a moment of reflection — not upon the morals of a society that invites people to channel their inner Adams, Eves, Steves and gender fluid “Theys” — but rather upon the post-pandemic prudery of organizers demanding the nude riders wear masks.

Hey, Tony Fauci — Whatever happened to “letting it all hang out?”

According to a report from NPR, “Organizers hope to continue the tradition of encouraging riders of all skill levels to bare it all in support of cycling advocacy, reduced fuel use, and body positivity, but they’re asking that riders wear a mask this year.” It says “asking” riders, but given the rabid advocacy of mask militants over the past year and a half, it is not unreasonable to assume mask-wearing will be a de facto mandate.

If I were interested in hopping on a bike and reprising my second-grade performance as Lady Godiva (in a full body leotard, it was a Catholic school after all), I could probably test my theory that masks are more than optional. Short of that, I will just have to wait until the riders set forth on August 28, hide my eyes, and listen to the radio reports about whether masks were worn.

Clearly, the tone of this piece is sarcastic, which is sort of a given when you are tasked to write about grown adults who think the rest of us want to see them storm the city displaying their (ahem) “shortcomings.”

But there is a serious issue that is somewhat covered up (pun intended) by the frivolity.

According to its organizers, the Naked Bike Ride is designed to “be positive and not worry about whatever other people might think. [It’s about] accepting each other and having fun…while advocating for everything the ride stands for.” And that “everything the ride stands for” includes body positivity, the idea that no matter how fat or skinny, how tanned or pasty, how pocked or clear-skinned, how dark, light or rainbow-hued you might be, you matter, and you should be happy in your, um, skin.

That’s a noble, albeit naïve, philosophy because no one is ever going to be completely happy with the way that they look, regardless of what the feel-good gurus tell you. To paraphrase Robert Browning, “A woman’s reach must exceed her grasp, else what’s Botox for?”

But if the whole principle of the Naked Bike Ride is to seek freedom and liberation from society’s oppressive shackles and unforgiving standards, is the face the first thing they should uncover? Topless? Big deal. Trouser-less — hey, we survived the Clinton administration.

Which is why the progressives behind the PNBR won’t do it.

To paraphrase Janis Joplin this time around, for Philadelphia progressives, “Freedom’s just another word for wear the damn mask, y’all.”