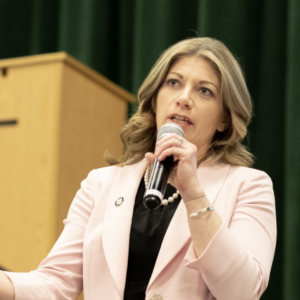 The bill, requiring parental notice when instructional materials and books containing sexually explicit material are being taught, passed the Senate Wednesday in a party-line vote. A second bill prohibiting teachers from speaking to very young children about sexual identity also passed the Senate. Both bills were sponsored by Sens. Scott Martin (R-Lancaster) and Ryan Aument (R-Lancaster)

But it was when she accused the bill’s backers of being bigots that she was called out by leadership. Sen. President Pro Tempore Jake Corman rebuked Muth and she recanted her name-calling.

Groups of concerned parents have complained to their legislators after discovering that library books such as “Gender Queer,” with many explicit passages, were in school libraries and available to children as young as middle school students.

Delaware Valley parents have complained to several local school boards about these books, including Great Valley and West Chester Area, but they were rebuffed.

“I believe this Senate bill is an excellent start to address the problem of sexually explicit materials in the schools,” said Bruce Chambers, a former Great Valley School Board president. “This issue was brought to the forefront by Fenecia Redman at Great Valley School Board meetings, but the school board would not even address the issue. In fact, when she showed the graphic material to the school board, they told her to take it down, and then left the room like cowards when she refused. Apparently, the school board didn’t see the irony in avoiding the material that was readily available to all the students in the library.”

Chambers added, “You can view an example of this online on the TikTok site for the Great Valley High School library. The second selection on the front page is ’10 Sweet Queer Graphic Novels.’ When you select it, you can see those Queer Novels featured by the librarian. This is the type of material that is currently up front and in the face of Great Valley students and should come under the legislation proposed by the Pennsylvania Senate.”

Redman also led a group of parents to the capitol last week to protest the books. The parents displayed enlarged posters of illustrations from some of those books, causing a capitol police officer to tell them to take their display down since children might be present.

Senate Bill 1277 would require schools to identify sexually explicit content in school curriculum and materials and notify parents that their child’s coursework includes such content. Senate Bill 1278 would prohibit classroom instruction on gender identity and sexual orientation for pre-kindergarten through fifth-grade students, consistent with the timeline for when the existing academic standards on general sex education begin in sixth grade.

“A school district in Chester County instructing elementary school teachers to withhold information from parents about children questioning their gender; a teacher reporting that a Philadelphia school was permitting volunteers to talk to elementary school students about LGBTQ issues without parental knowledge; and mothers of first-grade students in Allegheny County suing their school district for teaching about gender dysphoria without parental knowledge or consent – these are just a small sample of the dozens of complaints we’ve received from concerned parents around the commonwealth,” said Sens. Martin and Aument. “While we may not agree on what moral, ideological, and religious values to teach or not to teach our children, we can certainly agree that it should be up to the parent to decide – not the government.”

For some examples of sexually explicit content found in Pennsylvania school libraries and curricula, readers can, at their own discretion, review the dedicated webpage here, which contains blurred copies of the original materials.

The bills will be taken up by the House.